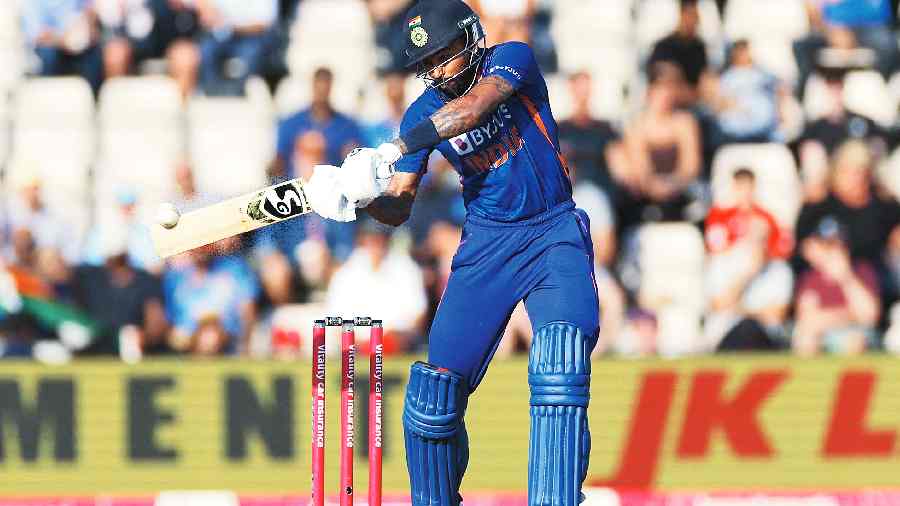 India began the three-match T20I series against England on a winning note, beating the hosts by 50 runs at Ageas Bowl in Southampton on Thursday.

Hardik Pandya smashed his maiden T20I half-century as India posted 198 for 8 after choosing to bat. In reply, England were all out for 148 in 19.3 overs.

Hardik starred with the ball too, taking 4/33 from 4 overs.

Alongside Hardik, who hammered 51 off just 33 balls, Suryakumar Yadav (39 off 19 balls) and Deepak Hooda (33 off 17 balls) also made useful contributions to propel India to a formidable total.

Captain Rohit Sharma (24), in his first appearance since recovering from Covid-19, looked solid before Moeen Ali got the better of him.

Having reached 150 in just 14 overs, India looked set for at least a total of around 210 or even more, considering how well Suryakumar and Hardik were batting.

Hardik, though, was also a tad lucky when England captain Jos Buttler missed a stumping opportunity off the bowling of leg-spinner Matt Parkinson in the 15th over. He was on 37 then. Hardik fell soon after getting to his 50, in the 18th over. The last three overs yielded India only 20 runs.

Even a 190-plus total looked difficult then, till Dinesh Karthik, who was once again sent in at No.7 after Axar Patel, hit a couple of boundaries in the final over.

Chris Jordan (2/23) was impressive with the ball for England.