Making a mockery of the PBKS bowling, openers Prithvi Shaw (41) and David Warner (60 not out) helped DC reach the target in just 10.3 overs 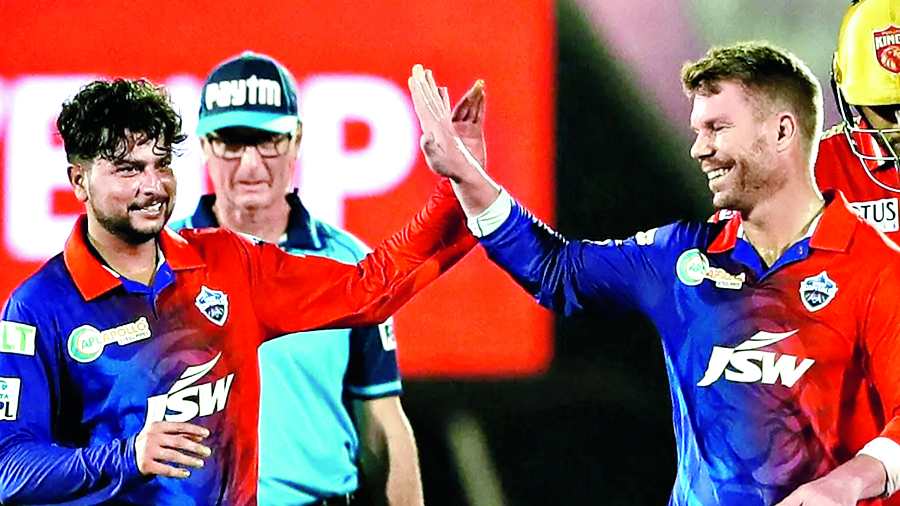 Another round of Covid-19 outbreak left the Delhi Capitals camp anything but panicked. Riding their bowlers’ collective effort, the Capitals bowled Punjab Kings out for 115, the lowest total of this IPL season so far, at the Brabourne Stadium in Mumbai on Wednesday.

Barring Shardul Thakur, who went wicketless and for 20 off his two overs, all the other Delhi bowlers were among the wickets after captain Rishabh Pant won the toss and opted to bowl.

Not that the pitch had plenty to offer for the bowlers. Yes, the bowlers did get some purchase, but in all fairness, those were excellent batting conditions which Punjab batsmen failed to make use of.

Making a mockery of the Punjab bowling, openers Prithvi Shaw (41) and David Warner (60 not out) helped Delhi reach the target in just 10.3 overs with nine wickets remaining.

One could only feel for the Punjab bowlers, as they had the task of defending a total that was impossible to defend, especially in such conditions and with one side of the boundary comparatively smaller.

Captain Mayank Agarwal, returning to the XI after missing Punjab’s previous game with a toe injury, began fluently. But after Shikhar Dhawan gifted his wicket away to part-timer Lalit Yadav (2/11), Mayank (24) too fell in the very next over with Mustafizur Rahman knocking him over.

The Bangladesh left-arm quick pitched it in the right area, which had Mayank in a tangle before he chopped the ball on to his stumps. That was another instance of Mayank’s technical frailties.

Jonny Bairstow, too, had begun well with two boundaries but gave catching practice to fine leg off a Khaleel Ahmed (2/21) delivery, which should have been hit for a four at least.

With Kagiso Rabada coming on to bat at No.7, it did reflect Punjab were one batsman short in their line-up, something Delhi bowlers used to their advantage. That said, credit also goes to left-

arm spinners Axar Patel (2/10) and Kuldeep Yadav (2/24) for their timely strikes which were key to denting Punjab’s progress.