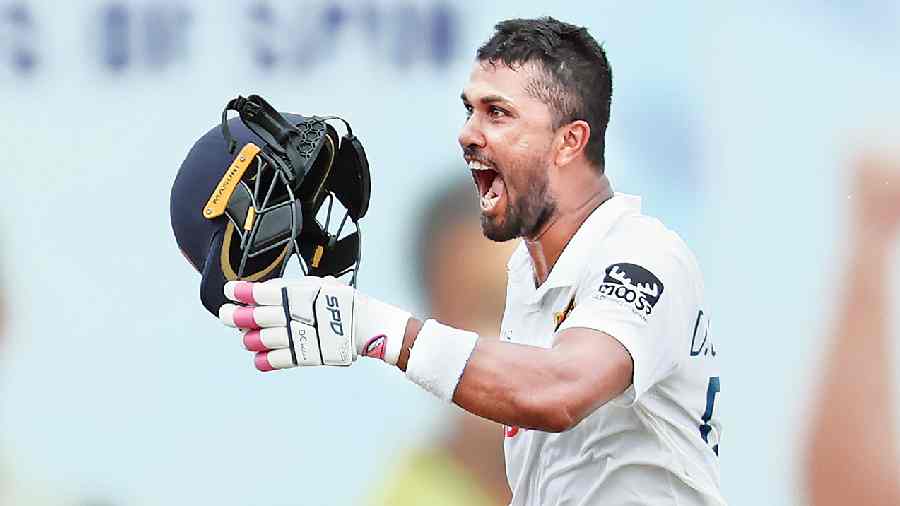 An elated Dinesh Chandimal of Sri Lanka after completing his double century on Day IV of the second Test against Australia in Galle on Monday.
Getty Images
Reuters   |   Colombo   |   Published 12.07.22, 01:32 AM

Dinesh Chandimal smashed a maiden double hundred and Prabath Jayasuriya claimed 12 wickets in a dream debut to script Sri Lanka’s series-levelling victory by an innings and 39 runs in the second Test against Australia on Monday.

Sri Lanka, beaten inside three days in the series opener, amassed 554 all out after five of their six batsmen smashed 50-plus scores to fetch a handy lead of 190.

Chandimal provided the bedrock with a career-best 206 not out, smashing 16 fours and five sixes in the first double hundred by a Sri Lanka batter against Australia.

Left-arm spinner Jayasuriya, who claimed 6/118 in the first innings, returned to bundle out Australia for 151 with figures of 6/59.

“Our boys bounced back really well after losing the first match and the debutants did an amazing job,” Sri Lanka skipper Dimuth Karunaratne said. “I knew from the beginning that Prabath would be key for us, he did a great job.”

The visitors began well with opener David Warner (24) and Usman Khawaja (29) batting positively. Ramesh Mendis dismissed Warner lbw before the tea before Jayasuriya rocked Australia with a two-wicket over after the break.

Khawaja offered a bat-pad catch while Steve Smith was dismissed lbw for a duck. From 49 for no loss, Australia slumped to 74/4.

Jayasuriya sent back Marnus Labuschagne (32) and then dismissed Cameron Green (23) and Mitchell Starc in the same over to effectively seal the match in Sri Lanka’s favour.

“We had plenty of chances over the last couple of days and didn’t quite grab them,” Australia captain Pat Cummins said.

“Unfortunately Sri Lanka were too good.”