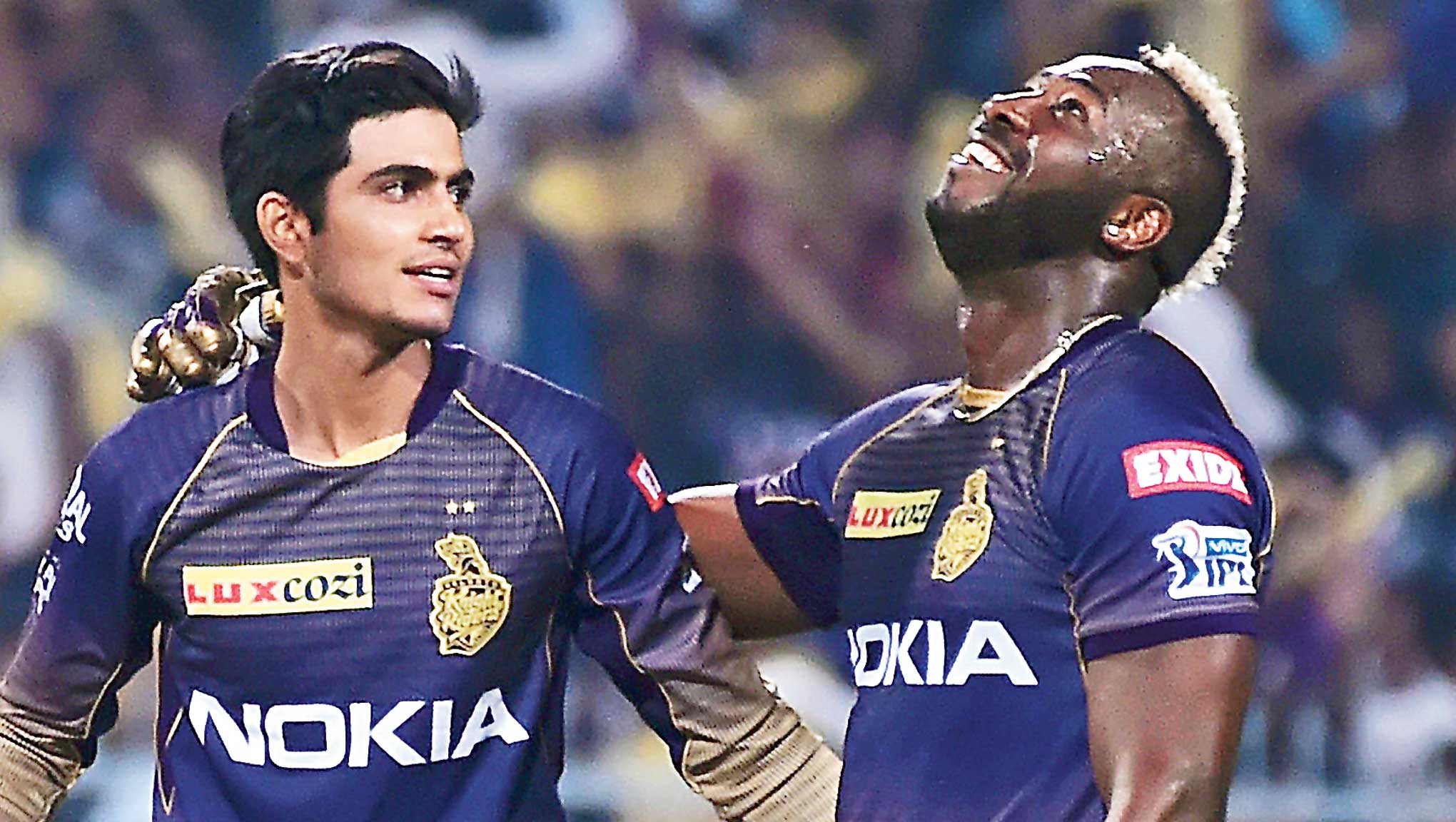 Shubman Gill and Andre Russell celebrate after the former hit the winning runs at the Eden on Sunday.
Picture by Santosh Ghosh
A Staff Reporter   |   Calcutta   |   Published 24.03.19, 09:29 PM

Some of the floodlights went off temporarily at Eden Gardens on Sunday, but then who needs them when there is an Andre Russell to light up the atmosphere with his breathtaking shots...

A match that seemed to be slipping away from the Kolkata Knight Riders’ grip was grabbed by the scruff of the neck by Russell and he then forced it to submission.

The result: the Knight Riders recorded a six-wicket victory over the Sunrisers Hyderabad to begin their IPL 2019 campaign in style.

The margin of victory was very misleading as it was in no way a comfortable win for the home team. That it looked easy in the end was because of one man — Russell.

Chasing a 182-run target, 53 runs were required off the last three overs — 18 balls to be precise — and it looked to be a tall task for the Knight Riders. But not to the towering Russell. He smacked Siddarth Kaul and Bhuvneshwar Kumar ‘black and blue’ to bring down the equation to 13 runs from the last six balls.

With young Shubman Gill (18 not out) smashing two sixes off the final over bowled by Shakib-al Hasan, the home team won with two balls to spare. 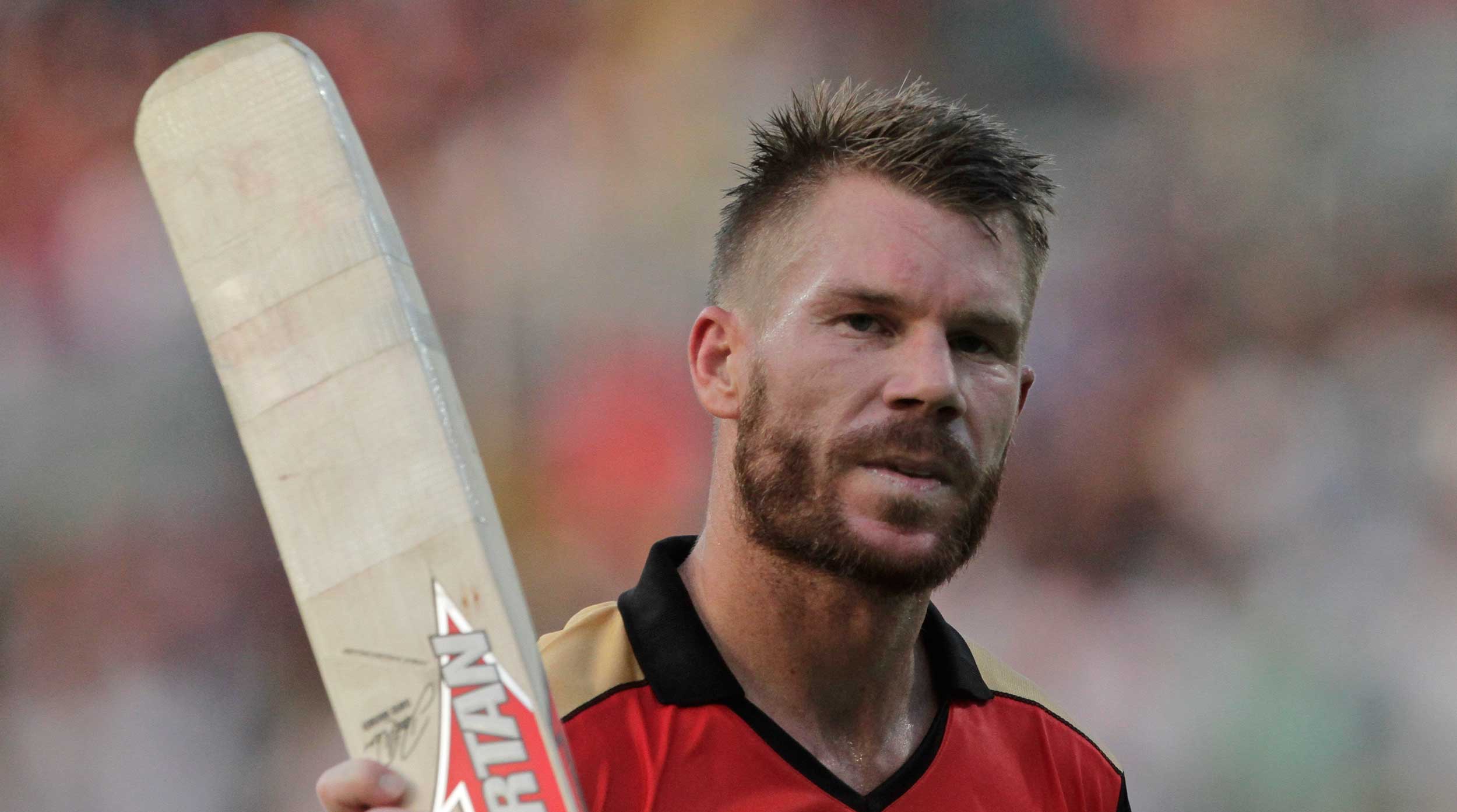 David Warner at the Eden on Sunday.
AP picture

Russell remained unconquered on 49 off 19 balls, hitting four monstrous sixes like only he can and four boundaries as well.

The other notable contributors for the Knight Riders were Nitish Rana, who made 68 off 47 balls, hitting eight fours and three sixes, and Robin Uthappa, who scored 35.

The Knight Riders’ chase, however, had begun on a wrong note as Chris Lynn (seven) departed in the second over. This after the home team was forced to open their innings with Lynn and Rana as Sunil Narine, the preferred opener, had hurt his hand while fielding and was unable to bat.

Rana and No. 3 Uthappa calmed the nerves somewhat, but weren’t able to score as quickly as the chase demanded. At the end of the sixth over, the Knight Riders were 47 for one. Things got even slower with the next four overs yielding just 23 runs.

After 15 overs, the equation for the Knight Riders stood at: 68 runs required off 30 balls. And then, Russell came to the party.

Earlier, Sunrisers openers David Warner and Jonny Bairstow chose to be patient in their very first match of this IPL. It was all about sensible batting from the duo, ignoring the usual slam-bang temptations of T20 cricket, but doing justice to the boundary balls whenever presented with one.

Warner was more aggressive than his opening partner from England and sprayed all kinds of shots all around the Eden. He drove, swept, pulled and pummelled in his usual style, dismissing any doubts of him not being in touch following his yearlong absence from top-level cricket.

While all of the feisty Australian’s shots were well executed, the reverse sweep off Kuldeep Yadav and an uppercut off Russell, which also brought up his fifty, stood out.

Warner and Bairstow shared 118 runs for the first wicket before the latter failed to read a Piyush Chawla googly and was bowled for 39 off 35 balls.

However, Warner perished while attempting a drive through the cover region off Russell’s bowling. A diving Robin Uthappa stopped Warner’s innings on 85, which came off 53 balls with the help of nine boundaries and three maximums.

When Warner got out, Sunrisers were on 144, had four overs to bat and as many as eight wickets at their disposal. They managed to add 37 more to their total, thanks to India’s World Cup hopeful Vijay Shankar’s innings of 40 not out off 24 balls.

Tamil Nadu all-rounder Shankar, who many believe is a dark horse in the fight for places in India’s World Cup squad, looked extremely confident with his shots. He hit two fours and as many sixes.

It’s another story, though, that later he also picked up full points for his team.