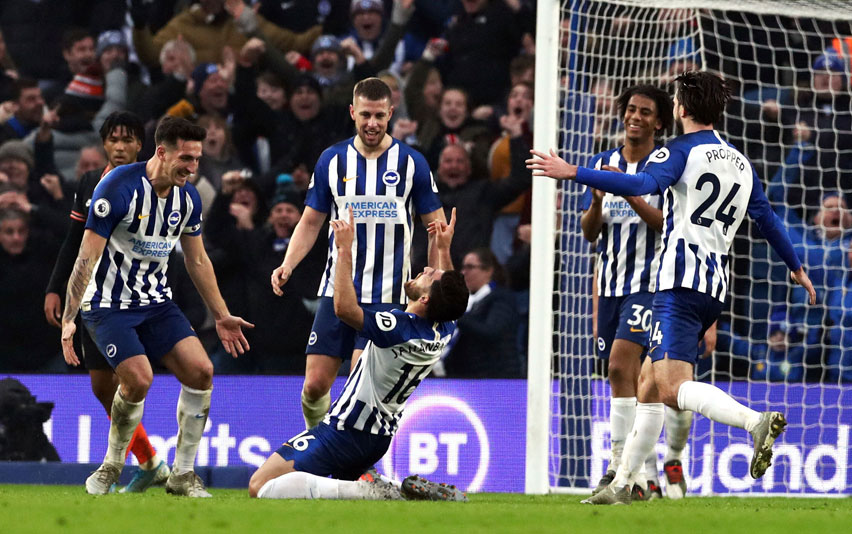 Brighton & Hove Albion forward Alireza Jahanbakhsh scored with a brilliant bicycle kick in the second half to cancel out Chelsea defender Cesar Azpilicueta’s opener in an entertaining 1-1 draw in the Premier League on Wednesday.

Left back Azpilicueta celebrated his 100th start as Chelsea captain with the opening goal.

Substitute Jahanbakhsh then produced an early contender for Goal Of The Year in the 84th minute, with a superb overhead kick that flew into the bottom left corner giving Chelsea goalkeeper Kepa Arrizabalaga no chance.

Ancelotti had enjoyed two wins from two before the trip to Manchester, but the writing appeared to be on the wall as Phil Foden thought he gave City a 13th minute lead, only for the VAR to spot an offside in the build up.

City took the lead in 51st minute through Gabriel Jesus.

Southampton completed a rejuvenating holiday schedule with a superb Danny Ings goal earning them a 1-0 win over stuttering Tottenham Hotspur.

A hamstring injury to Harry Kane that forced the England striker off in the second half ensured it was a miserable start to the new year for Tottenham, whose manager Jose Mourinho was booked for an altercation with the home coaching staff. “I was rude. But I was rude to an idiot,” Mourinho said later.

Leicester striker Ayoze Perez came back to haunt his former team Newcastle United with a goal and an assist for James Maddison, as the Foxes eased to a 3-0 win.

Struggling Aston Villa picked up just their second away win of the season, securing three vital points in a 2-1 win at Burnley, their first league win at Turf Moor since 1936.

Villa thought they had taken an 11th minute lead through a diving header from Jack Grealish but a VAR review found that Wesley Moraes’s heel was marginally offside during the move and the goal was over-turned.

It was exactly the kind of ‘forensic’ use of VAR that has been criticised over the festive period and which has been questioned by the game’s rule-makers IFAB.