The Argentina star has travelled to his country. A knee injury has kept him out of two matches for his club Paris Saint-Germain 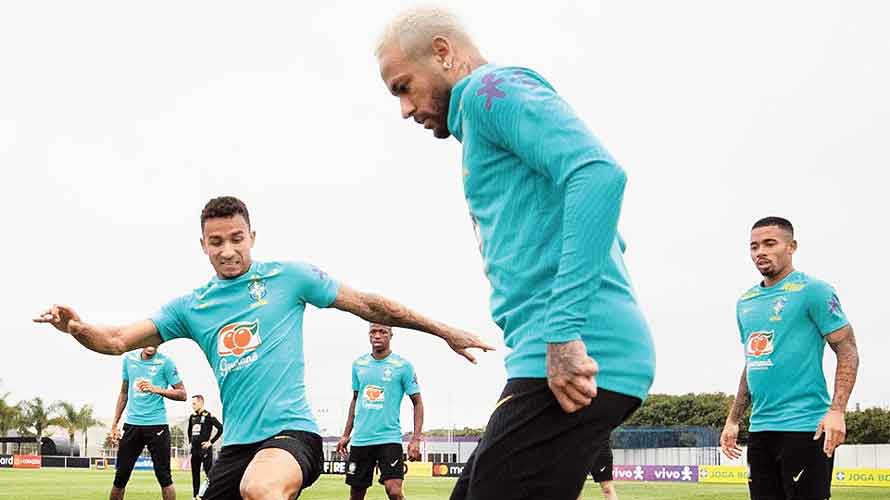 The main aim for Brazil this week is to beat Colombia and secure an automatic spot at next year’s World Cup in Qatar with plenty of time to spare in South American qualifying.

For second-placed Argentina, the bigger concern ahead of their trip to Uruguay is over the fitness of Lionel Messi.

Brazil have 31 points and Argentina 25 from 11 matches — their encounter in September was bizarrely suspended after seven minutes of play because of concerns from authorities over breaches of Covid-19 protocols. Fifa is yet to decide what to do with it.

Ecuador (17), Colombia (16) and Uruguay (16) hold the next three places, but have all played 12 matches. The top four teams in South America earn direct entry to next year’s World Cup. The fifth-placed team goes into an inter-continental playoff for a spot in Qatar.

A Brazil victory at the NeoQuimica Arena in Sao Paulo on Thursday will put coach Tite’s team 18 points ahead of fourth-placed Colombia, who will have only five more matches in hand. The Colombians are the only team to hold the Selecao to a draw in the current edition of qualifiers.

Some mathematical combinations allow second-placed Argentina to hope for a direct spot with a win against Brazil next week in San Juan, but the Copa America champions will have to beat Uruguay in Montevideo on Friday to have any chance of achieving that in front of their home fans.

There are three other matches in South American qualifying on Thursday, including Ecuador hosting last-placed Venezuela and Peru against Bolivia. Paraguay, in eighth place, will play sixth-place Chile in a match that could nearly end qualification hopes for one of them.

Brazil, pushing for a record eighth consecutive home win in World Cup qualifiers, have had very physical matches against Colombia recently. And that worries the players and coach ahead of Thursday’s showdown.

It was the case at a 0-0 draw in Barranquilla last month and also at a Copa America group stage match in June, won by the hosts 2-1 at the last minute in Rio de Janeiro.

Thiago Silva, Marquinhos, Eder Militao, Casemiro, Fabinho, Gerson, Lucas Paqueta and Gabriel Jesus will be suspended for Tuesday’s match at Argentina if they get a yellow card against Colombia. That is why Tite’s starting line up is anything but certain.

Colombia will miss injured striker Radamel Falcao. “We are not going for a draw, we want to beat them,” Colombia striker Miguel Borja said. “Other teams have gone at them and then they concede three, four times. We have the potential to win.”

Though Messi has travelled to Argentina, a knee injury has kept him out of two matches for his club Paris Saint-Germain. Argentina coach Lionel Scaloni has not given any hints on whether Messi will play or, in the case he doesn’t, who would be picked as a replacement.

But it is Uruguay, a team that still is in a qualifying position, which will be under more pressure. The Uruguayans had heavy losses to Brazil and Argentina last month and the future of veteran coach Oscar Tabarez might be at stake in the next two qualifiers.

“I don’t think about that,” Tabárez said in response to questions about his job security. “These decisions are for officials. I have a contract, I have had one for 15 years and my obligations are very specific.”

Uruguay have a long injury list  while Rodrigo Betancur is suspended against Argentina.