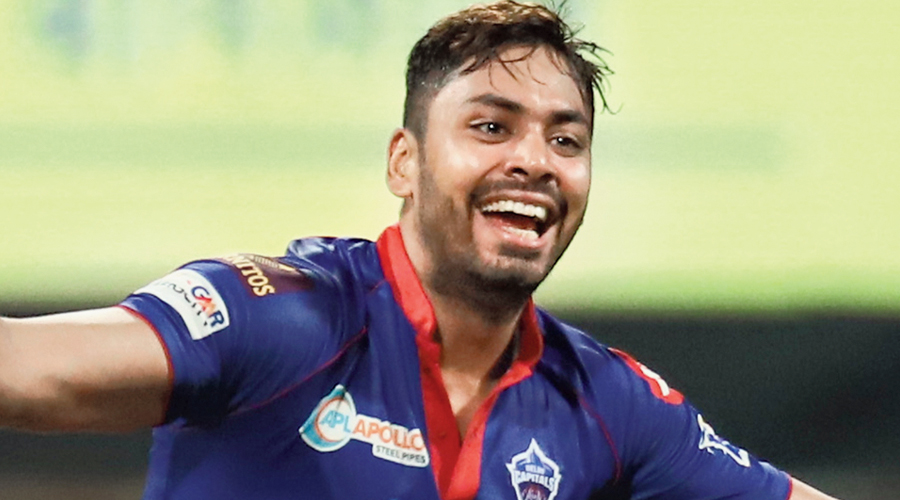 Playing conditions in England are not quite similar to those in India. But Avesh Khan begs to differ.

The young pacer from Madhya Pradesh, who impressed bowling for Delhi Capitals before IPL 2021 came to a premature halt, will be on the flight to England along with the Indian Test team as a standby player.

The 24-year-old was the Capitals’ highest wicket-taker with 14 scalps from eight matches and the postponement of the IPL left him disappointed briefly. But being at home during the Ramazan month and preparing for Id lifted his spirits.

“Jabse ghar aaya hoon, acchi tarah se roza rakkha aur uske saath Id ki taiyyaari (Since returning home, I’ve been observing the fast and getting ready for Id). So these days have been well spent and were of course a bit of a relief too,” Avesh told The Telegraph from his residence in Indore.

Talking of home, Avesh thinks he can adapt to the conditions in England well because he has played in similar weather and on seaming pitches in India as well. Also, though a standby player, Avesh realises that he will be required to bowl a lot at the nets and he is aware of the areas he needs to focus on.

“Rhythm will be very important. I need to make sure I bowl in a rhythm similar to how it was during this IPL.

“Trying to adapt to the English conditions is another aspect, while I have to focus on fitness too because having the right run-up is equally important to be a good fast bowler. And yes, working on getting the ball to seam and swing,” he emphasised.

“But that also depends on the conditions. Besides, as a bowler, considering the number of matches I’ve played so far, I’m quite capable of reading the conditions because in our country too we have places like Dharamsala (Himachal Pradesh) and Lahli (Haryana), where the ball swings and moves.

“Then Ranji Trophy happens during winter, so at that point in time, we do get to play in venues that aid swing and seam. Here, in Indore too, quicks get good assistance. So conditions in England, I don’t think will be alien to me... Will take one or two days maximum to get used to them,” Avesh added.

Bowling at the nets in Chennai during India’s Test series versus England earlier this year also helped.

“The season started really well for me as I took 14 wickets from five matches in the Syed Mushtaq Ali (T20) Trophy before the IPL.

“Prior to that, I was with the Indian team in Chennai and bowled quite a lot during the training sessions there. So I was in rhythm since then,” he pointed out.

As for his gains from this year’s IPL, where he was good enough to feature in all matches the Capitals played, Avesh has been able to add yorkers and the slower ball to his repertoire.

“I’ve been working on yorkers, which I bowled quite often in this IPL, and also developed my slower delivery. The bouncer and bowling the hard length are something I knew already,” he said.

And what clicked for him at this year’s IPL?

“I was there in the squad last year too, but played in very few matches.

“I had been bowling well since the start of this year, so egged myself on to maintain that. I ensured not to err in terms of execution and that led me to perform.

“Thereafter, encouraging words from head coach Ricky Ponting as well as the bowling coach (James Hopes) motivated me a great deal. This was one good opportunity for me to make a mark and I’m glad I could make use of it,” Avesh said.