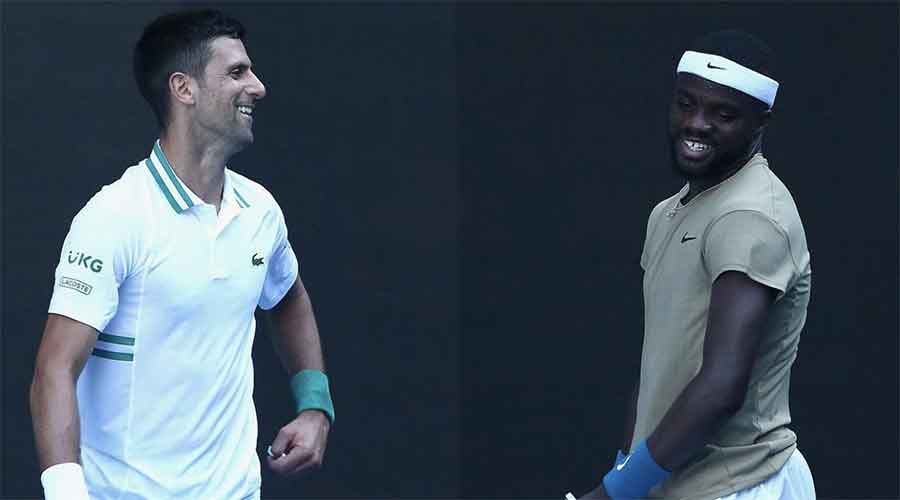 Novak Djokovic’s aura of invincibility at Rod Laver Arena wavered under the pressure of Frances Tiafoe on Wednesday, but the Serbian rose to the challenge to claim a tough 6-3, 6-7 (3-7), 7-6 (7-2), 6-3 win and reach the third round of the Australian Open.

The double-defending champion has rarely been tested so early at his favourite Grand Slam but he had his hands full against American Tiafoe, whose sparkling tennis revived memories of his exhilarating run to the 2019 quarter-finals.

“Very tough match,” said a relieved Djokovic on court, his voice faint and hoarse from the battle. “Also difficult conditions. While we had sun on the court it was very, very warm. I want to give a hand to Frances again for a great fight. It was a fantastic match.”

Nick Kyrgios saved two match points on his way to a 5-7, 6-4, 3-6, 7-6 (7-2), 6-4 comeback victory over Frenchman Ugo Humbert. Roared on by a crowd making up in passion for what they lacked in numbers, Kyrgios scrapped his way back into the contest time and again to secure a third-round date with US Open champion Dominic Thiem.

“I don’t how I did that. Honestly, that is one of the craziest matches I’ve ever played,” said Kyrgios.

There is no shame in losing to Canadian Denis Shapovalov, but there might have been a hint of nostalgia for Bernard Tomic as he bowed out. The 11th seed was way too good for Tomic, thrashing him 6-1, 6-3, 6-2.

Like 21-year-old Shapovalov, Tomic was tipped to become a major Grand Slam contender after making the 2011 Wimbledon quarter-finals at the age of 18.

Two-time Wimbledon champion Petra Kvitova had no excuses for her second-round exit, refusing to blame the mandatory two-week quarantine for her rusty display in a 4-6, 6-1, 1-6 defeat to Romanian Sorana Cirstea.

Kvitova recovered well after losing the opening set but her efforts were undone by untidiness, ending with 44 unforced errors and seven double faults.

Naomi Osaka dreamt that she would lose her second round match here but the reality was a comfortable 6-2, 6-3 victory over Caroline Garcia.

Serena Williams said she played better when she was not thinking too much after a 6-3, 6-0 victory over Nina Stojanovic. The American needed to find her best game at times in the first set against a spirited Serbian 15 years her junior who was playing in her fourth Grand Slam. But in the second she just swept past her opponent.

Bianca Andreescu’s comeback after a 15-month absence ended abruptly with a 6-3, 6-2 defeat to the wily Hsieh Su-wei.

India endured a second successive disappointing result here, with Rohan Bopanna and Ben McLachlan bowing out after a close opening-round defeat to Ji Sung Nam and Min-Kyu Song in the men’s doubles. Bopanna and his Japanese partner lost 4-6, 6-7 (0-7) to the Korean wild card pair in one hour and 17 minutes.