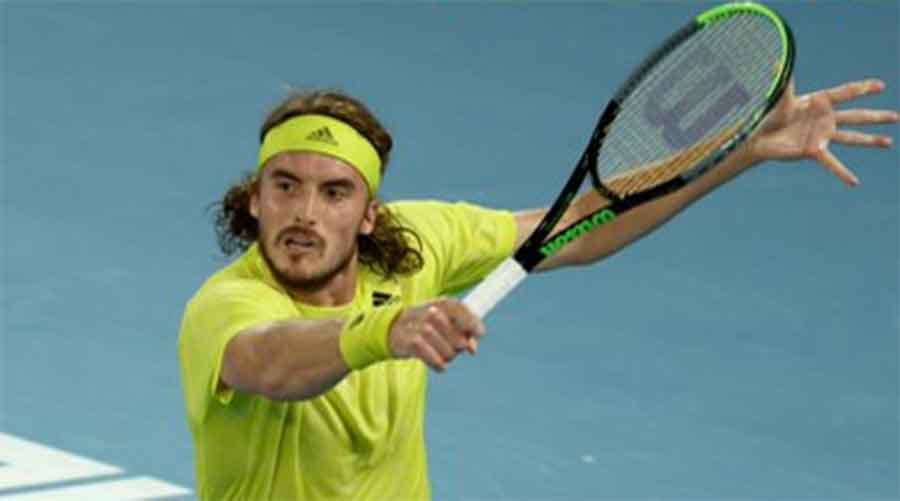 In another huge upset, home favourite and top seed Ashleigh Barty was shown the door by Karolina Muchova.

World No. 2 Nadal had not lost a set coming into the evening clash at Rod Laver Arena and was locked on target for the last four at Melbourne Park after roaring to a two-set lead over the listless Greek.

The match turned on its head when Nadal wavered in a messy third set tie-break, and a rejuvenated Tsitsipas rallied brilliantly to take the match into a decider.

Capturing Nadal’s serve at 5-5 in the fifth, Tsitsipas saw two match points slip through his fingers as he served for the match. He then fired a backhand winner down the line on the third to claim one of his finest career victories.

Fifth seed Tsitsipas will meet Russian Daniil Medvedev for a place in the final.“I fly like a little bird and everything was working for me,” Tsitsipas said on court. “The emotions in the end are indescribable.”

Medvedev outclassed friend and compatriot Andrey Rublev 7-5, 6-3, 6-2 in sweltering conditions to secure a spot in the semi-finals and extend his winning streak to 19 matches.

The pair rose up through the ranks together, playing against each other on the junior circuit, and two weeks ago combined to hand Russia the ATP Cup title.

At senior level Rublev has enjoyed little success against Medvedev and Wednesday marked a fourth consecutive straight sets win by the 2019 US Open finalist.

Following his victory at a scorching Rod Laver Arena, Medvedev, at 25 two years Rublev’s senior, needed a massage on his left thigh before proceeding to his on-court interview and said he was cramping towards the end of a contest lasting two hours and five minutes.

“Super tough, if you come to Australia and it’s 40 (degrees) each day, it’s tough, but you get used to it. But we’ve had a couple of days when it was 20 degrees,” said Medvedev.“We had some unbelievable rallies, I’m one of the first players to make Andrey so tired... It’s hard to play (a friend) but we’re all so competitive, just need to win, get to that Grand Slam semi-final,” Medvedev said.

“That was one of my best matches... I beat him in three sets not even with a tie-break. So I’m really happy.”

Muchova said she was so dizzy she thought she was going to faint during her quarter-final against Barty, before a lengthy medical timeout helped her regain her composure to turn the tables on the world No.1.

Home favourite and top seed Barty was leading by a set and a break when Muchova called for the timeout at a steamy Rod Laver Arena.

“I was feeling kind of dizzy at some point, like really lost and almost fainting. I just asked for help,” said Muchova, who won 1-6, 6-3, 6-2 to reach the semi-finals.

“They just checked my (blood) pressure because I was a bit lost, you know. My head was spinning. So they cooled me down a bit with ice, and it helped me.”

With shortened rallies and bold shot-making, Muchova went on to break her opponent twice in the final set to reach a Grand Slam semi for the first time.

Muchova’s comeback was her third come-from-behind win of the campaign. She reeled off the last seven games from 0-5 down in the second set to win in the 7-5, 7-5 against compatriot Karolina Pliskova.

Against Elise Mertens, Muchova clawed back from a 0-4 deficit in the opening set, while against Barty, she claimed 12 of the final 15 games.

Muchova will next face American Jennifer Brady for a place in the final.

“It’s heartbreaking, of course,” said Barty, who was hoping to become the first homegrown Australian Open champion since Chris O’Neil in 1978. She, however, had no complaints about the medical timeout that turned the match on its head.

“It’s within the rules,” Barty said.“She’s within her rights to take that time. If she wasn’t within the rules, the physios and the doctors would have said so. I am disappointed that I let that become a turning point. I'm experienced enough now to be able to deal with that.”

Brady battled through her frustrations to overhaul friend and US teammate Jessica Pegula 4-6, 6-2, 6-1. The 22nd seed has a golden chance to reach her first Grand Slam final after Barty’s shock exit.

With Serena Williams to face Naomi Osaka in the other semi-final, the Australian Open could have another all-American title match on Saturday, four years after Serena beat her sister Venus for the 2017 championship.

Brady’s effort is more remarkable for having been one of the 72 players in hard quarantine before the tournament, unable to train on courts for five hours a day like the rest of the field.