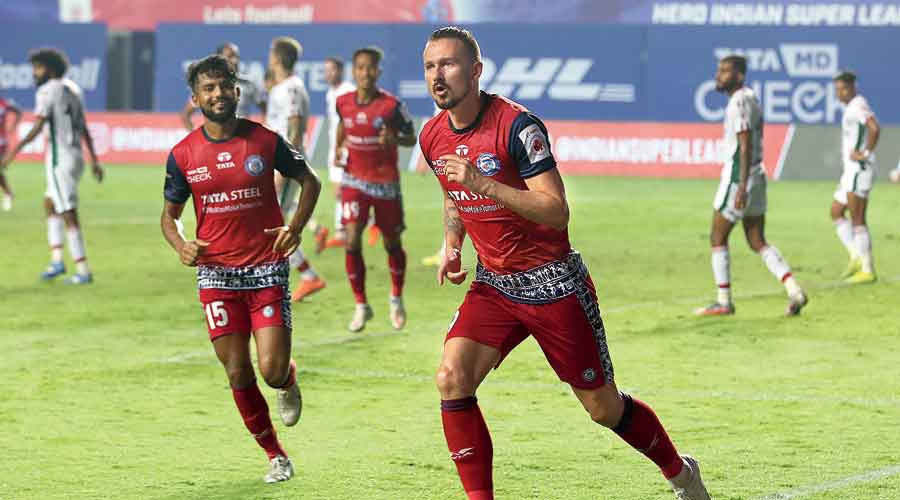 : Nerijus Valskis (right) of Jamshedpur FC celebrates after scoring the first of his two goals against ATK Mohun Bagan at Tilak Maidan in Vasco on Monday.
Picture courtesy ISL
Our Bureau   |   Calcutta   |   Published 08.12.20, 05:01 AM

ATK Mohun Bagan’s winning run came to a halt as they were beaten 1-2 by Jamshedpur FC in an Indian Super League (ISL) match at Tilak Maidan in Vasco, Goa, on Monday. This was ATK Bagan’s first loss in ISL VII.

Nerijus Valskis scored a brace (30’, 66’) for the winning side. Roy Krishna pulled one back for ATK Bagan.

It wasn’t all smooth sailing for Jamshedpur as the Antonio Lopez Habas-coached side threatened them with counter-attacks. But resilient Jamshedpur FC deservingly took the lead at the half-hour mark when Aitor Monroy’s corner kick was perfectly nodded in by Valskis.

This was the first goal  that ATK Bagan conceded this season.

Jamshedpur FC could have got their second goal in the first half itself but ATK Bagan goalkeeper Arindam Bhattacharja managed to save another Valskis shot.

After the change of ends, ATK Bagan looked a stronger unit but Jamshedpur FC were prepared for it. Goalkeeper TP Rehenesh rescued Jamshedpur FC twice.

Jamshedpur FC doubled the lead in the 66th minute and it was Valskis who got on the scoresheet again. The goal came once again from a set-piece as Monroy dipped in a perfect corner-kick which was flicked by Mohammad Mobashir Rahman. Valskis pounced on the ball and smashed it into the roof of the net to make it 2-0.

Roy Krishna reduced the margin for ATK Bagan in the 80th minute. Substitute Manvir Singh flicked the ball to Krishna, who scored. This was the fourth goal for Krishna in as many games.

Jamshedpur FC now have five points from four matches while ATK Bagan have nine points from the same number of matches.