Amit has defeated Olympic champion — Hasanboy Dusmatov of the Ukraine — not once, but twice in his career 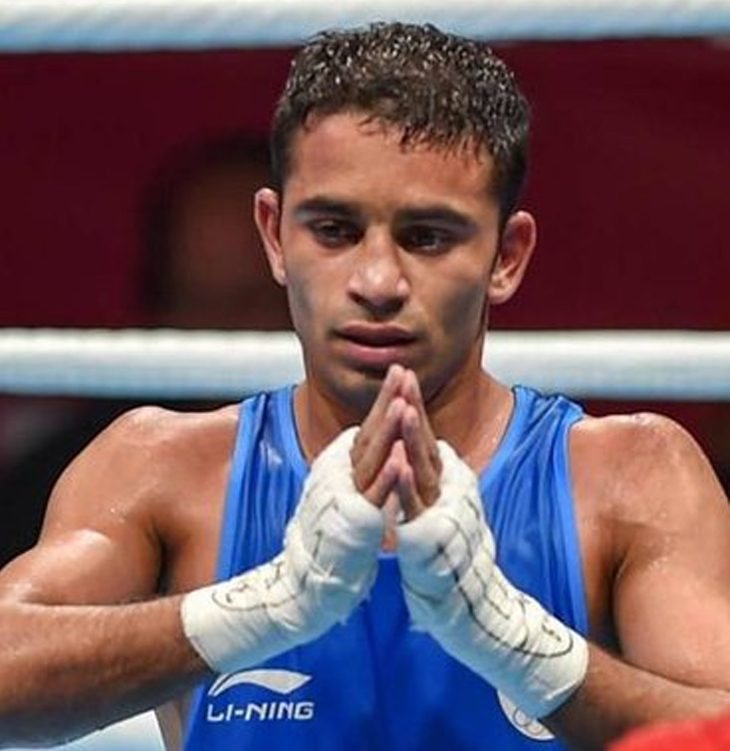 Dharmendra’s movies and homecooked wholesome Punjabi food are the things that make Amit Panghal happy. But the Asian Games gold medallist and the reigning Asian champion has set himself another goal to increase his happiness quotient — a medal at the Tokyo Olympics.

And having defeated an Olympic champion — Hasanboy Dusmatov of the Ukraine — not once, but twice in his career, Panghal seems to be on the right road.

The fact that he was included in the Target Olympic Podium Scheme (TOPS) on Wednesday bears testimony to the fact that he is considered to be a medal hope in Tokyo.

Panghal defeated world silvermedallist and Rio Olympic champion Dusmatov for the first time at the Asian Games final in Jakarta. He repeated the feat at the Asian Championships in Bangkok this year, when he beat Dusmatov in the quarter finals, and went on to win gold.

“After the weight change in the last one year (he now fights in the 52kg category, instead of his original 49 kg which was dropped from the Olympics program), I’ve fought against many top boxers in my group and have trained in different countries and participated in various tournaments. All of these have certainly helped to improve my game and my understanding of opponents,” Panghal told The Telegraph from Yekaterinburg, Russia

“Defeating Dusmatov was great. Beating an Olympic champion always gives a different kind of confidence and helps to measure one’s progress,” he added.

“My goal now is an Olympic medal and winning a medal at the World Championships will ensure a direct entry into the India squad for the Asia Oceania qualifiers for the Olympics in February 2020.

“I have been working with the coaches (Santiago Nieva and CA Kuttappa) very closely and have tested myself against top Asian counterparts during the Asian Championships. The switch to the new weight category means I will face a lot of new boxers. I have watched their videos and prepared myself for the competition.”

Asked who has been his toughest opponent, he said: “At the world level, underestimating anyone is a big mistake. All the top boxers pose a tough challenge.”

Panghal believes he is on the right track to qualify for the Tokyo Games. “I believe my preparations are on the right track and the first step would be to win a medal at the World Championships and secure my place in the India squad for the AsiaOceania Olympic qualifiers.”

Panghal idolises Vasyl Anatoliyovych Lomachenko of Ukraine. A professional boxer, Lomachenko is now the unified lightweight world champion, having held the WBA, WBO and The Ring magazine titles since 2018, and the WBC title since 2019.

Asked if he, like Vijender Singh, wants to turn professional, Panghal replied in the negative. “I’ve not thought about it to be honest. My sole focus now is winning an Olympic gold medal for India.”

Panghal started his boxing journey guided by his brother Ajay, who was an amateur boxer. Recalling those early days at their village Mayna, in Haryana, he said: “I used to sit behind Ajay on his bicycle and accompany him to Chowdhary Chottu Ram Boxing Club where I used to train under my first coach Anil Dhankar. Gradually, my love for boxing increased and it became my life.

“My brother is the reason I started boxing. He quit so that I could pursue the sport seriously. My parents have sacrificed a lot for me.”

Outside the boxing ring, Panghal loves to listen to Babbu Maan and relaxes by watching Dharmendra’s movies. “I love watching Dharmendra Paaji’s films. I can watch all his movies on the loop. I’ve grown up watching his movies and loved his fight scenes. I used to sit with my father and be glued to the TV set. Meeting him was a dream come true for me after I won the Asian Games gold.”

Panghal has been supported by the Olympic Gold Quest and now he is enlisted in TOPS. “I feel privileged to be a part of TOPS. I thank Boxing Federation of India for proposing my name… As an athlete I am more motivated after getting such support from the government.”

Panghal is also thankful to the OGQ for their support. “Recently, when I couldn’t find a perfect pair of shoes, they got it for me from the US.”