Advertisement
Home / Sports / An ice marathon across a frozen Russian lake: ‘I ran twice as fast’

An ice marathon across a frozen Russian lake: ‘I ran twice as fast’

Many runners said testing their limits drew them to Baikal, the Earth’s largest, deepest body of fresh water 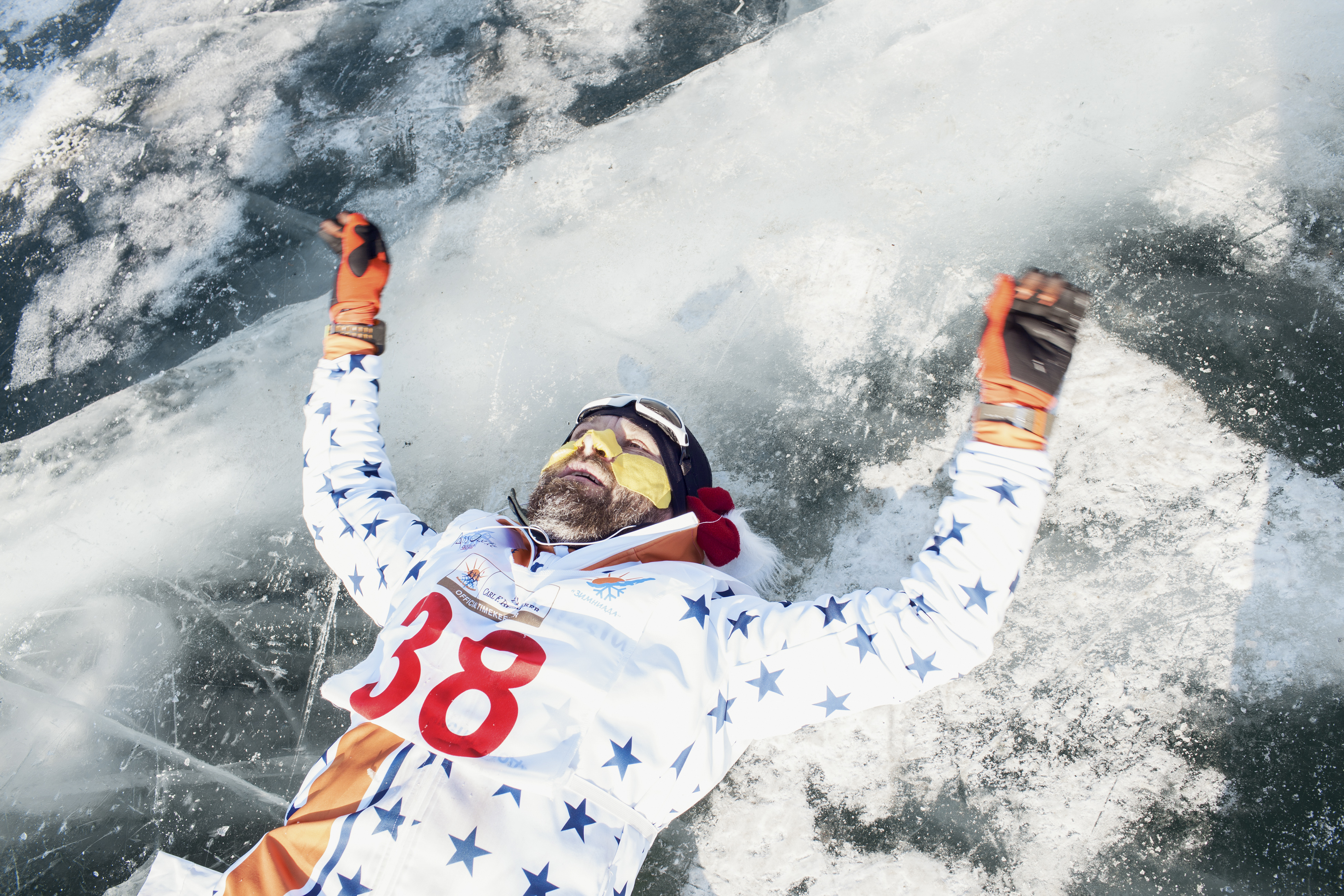 The ice rumbled and then shook underfoot. No one had warned Véronique Messina about that.

Messina, a French speech therapist working in Cambodia, came to Lake Baikal in distant Siberia to run a marathon across its frozen surface. She ventured onto the ice for her first trial run just a day before the race.

“I am afraid of water to begin with, and you can see that you are running on water,” she said.

The booms and tremors rippling across the ice as it shifts, sometimes called the “Baikal Symphony”, proved an even worse surprise.

“It was horrible,” said Messina, 40. “The ice was shaking. I was shaking. Each time it cracked, I think I ran twice as fast.”

Véronique Messina, a runner from France, attaches athletic tape to protect her face from frostbite, on the morning of the Baikal Ice Marathon.
The New York Times

Marathon runners often use races to explore the world, and every March the Baikal Ice Marathon attracts a small group to the lake, a UNESCO World Heritage Site, both for its exotic, ethereal beauty and the unpredictable, grueling conditions.

Edged by distant snow-capped mountains, the winter lake is a vast plain of white snow interrupted by extended swaths of dark blue ice swept clear by the wind.

Many runners said testing their limits drew them to Baikal, the Earth’s largest, deepest body of fresh water, some 2,700 miles east of Moscow.

“My 30th birthday is later this month so I wanted to do something crazy,” said Sabrina Kwong, a Hong Kong banker, adding nervously, “I signed up before thinking how extreme it would be.”

The ice and the weather ensure that no two races are identical.

“Baikal prepares new surprises, especially for you runners, every time,” Nikiforov said during a briefing the night before this year’s race. “That makes it more interesting,” he added, provoking nervous laughter.

Asked in 2005 to organise a marathon skirting the lake, Nikiforov, who owns a small Siberian tourism company, thought: “Why not across it?”

The Baikalsky Nature Reserve on the eastern shore sits 23.2 miles from Listvyanka, the main tourist village on the western side, 3 miles short of a marathon’s official 26.2 miles. To add them, the headache is identifying a smooth, meandering path devoid of cracks or impassable berms of broken ice.

Nikiforov scouts the ice repeatedly for weeks before the race. He tests the thickness with a trusty Soviet hand drill; 17 inches can support a tank.

A snack and water table on the frozen surface of Lake Baikal during the ice marathon.
The New York Times

This year the ice was about 27 inches thick. Thundering like distant cannon fire, random cracks cleave open and slam shut in the frozen, floating crust.

Cracks present more of a danger of twisting an ankle than falling through, although one year such a large hole opened that runners avoided the water by scrambling across three small, parked hovercraft.

Last year, a fierce, glacial wind blew up from nowhere, reducing visibility to a few yards. Disoriented runners stumbled off the route marked by short red flags. Some got frostbite.

Nikiforov reluctantly canceled the race for the first time and evacuated everyone.

Drawing from the local shamanistic traditions, he considers Lake Baikal a living being.

“People think that I am crazy when I say that Baikal is alive, that it is breathing, but they come here and they feel it,” he said.

Two Russian and French running partners, Vladimir V. Voloshin, 44, and Laurent N. Lecamp, 41, forced off the lake in 2018, kissed the ice when they arrived this year. “It was part of our investment in good weather,” Voloshin said.

During the briefing, Nikiforov casually mentioned that he had just discovered a new crack. One anxious question: “Can you explain a little more about the crack — how wide is it?”

“It might close, it might get wider, we don’t know,” he responded, adding that boards could be laid over the 11-inch fracture if needed.

Race day started with a 55-minute ride on 10 small hovercraft across the lake to the starting point. This year 97 men and 30 women participated from 23 countries, with a quarter of the racers from Russia.

Of the total, 24 people ran a half marathon. Nikiforov keeps the race small, not least so he can evacuate everybody if necessary.

The race motto is “Clean Water Preservation Run,” but the competition is less an active environmental effort than an attempt to raise consciousness about protecting the mile-deep lake. It holds about 20 percent of the fresh surface water on Earth.

Thick clouds threatened snow as the runners departed in a pack. Within an hour, they had spread out over three miles, little black dots on an all-white planet where the snowy lake merged with the overcast sky.

Then the sun emerged and at 26 degrees Fahrenheit, balmy for Siberia in March, one Russian runner stripped to just shorts. Spotting him, Nikiforov leapt from his hovercraft.

“You will either lose your testicles on your own or we will help you!” he bellowed in Russian, using a more earthy term and threatening expulsion if the man did not dress. “The rules have to be tough, this is Baikal,” he muttered.

The recommended wardrobe for the runners included a balaclava; face tape; goggles or glasses; a light, windproof jacket and pants; two layers of thin thermal underwear and heavy gloves.
The New York Times

Messina set off with some trepidation. Fretting about the crack, she decided to stick with other runners. She soon found herself solo, however, eyeballing the thick white veins in the ice and wondering where to leap if one burst open.

“It was also beautiful,” she said, “You are alone on Baikal, it is your race, you are alone with yourself.”

The distance did not faze her. She has run longer races, like traversing 250 miles of the Gobi Desert.

Unique for a marathon, the finish line is tantalisingly visible from the start. The endless white offers no perspective, however. To the runners, the distant, sherbert-colored hotel behind the finish line or the aid stations providing tea and snacks roughly every four miles appeared to float in space without getting closer.

After the gruelling marathon, time for celebrations.
The New York Times

For some runners, that and the absence of spectators made the race drag, so they imagined cheering throngs.

Keith A. Gayhart, 64, a Los Angeles public relations executive who compared himself to a castaway, sang along to playlist favourites like Highway to Hell by AC/DC.

The race ended with little fanfare. Tourists crowding the ice mostly ignored the runners, who maneuvered to the finish line past obstacles like ice skaters, dog sleds and tourists snapping selfies.

Anton Dolgov, 44, a wiry Moscow IT executive, won in 3:05:05 hours. Ekaterina Lykasheva, 30, from nearby Irkutsk, was the first woman at 3:49:30, joyfully sliding the last few feet on her knees into the arms of her husband and young son.

“I did it, I ran on water!” she said triumphantly, describing the overall experience like being an astronaut exploring another planet. “I was just so happy to be there!”

Would she do it again?

“I love to see new places, other things,” she laughed.