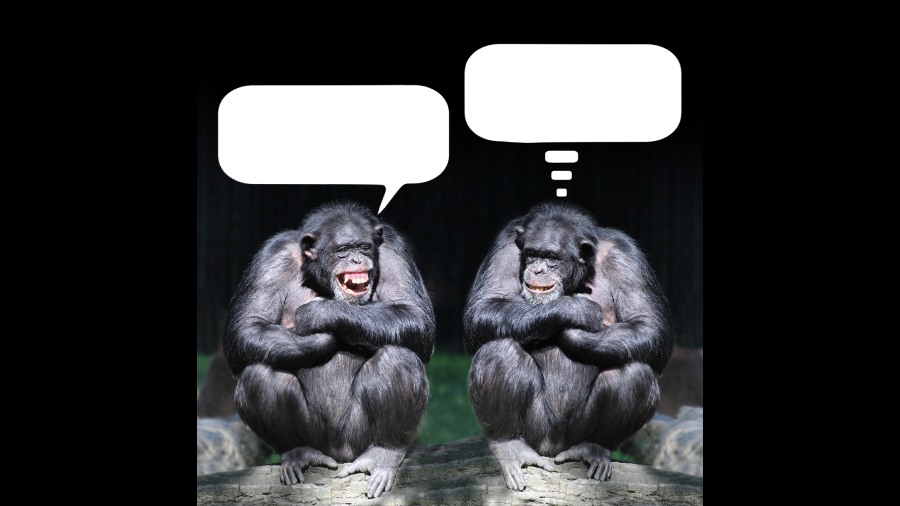 Read this sentence aloud, if you’re able. As you do, a cascade of motion begins, forcing air from your lungs through two muscles, which vibrate, sculpting sound waves that pass through your mouth and into the world. These muscles are called vocal cords, or vocal folds, and their vibrations form the foundations of the human voice.

They also speak to the emergence and evolution of human language.

For several years, a team of scientists based mainly in Japan used imaging technology to study the physiology of the throats of 43 species of primates, from baboons and orangutans to macaques and chimpanzees, as well as humans. All the species but one had a similar anatomical structure: an extra set of protruding muscles, called vocal membranes or vocal lips, just above the vocal cords. The exception was Homo sapiens.

The researchers also found that the presence of vocal lips destabilised the other primates’ voices, rendering their tone and timbre more chaotic and unpredictable. Animals with vocal lips have a more grating, less controlled baseline of communication, the study found; humans, lacking the extra membranes, can exchange softer, more stable sounds. The findings were published recently in Science.

“It’s an interesting little nuance, this change to the human condition,” said Drew Rendall, a biologist at the University of New Brunswick, US, who was not involved in the research. “The addition — if you want to think of it this way — is actually a subtraction.”

That many primates have vocal lips has long been known, but their role in communication has not been entirely clear. In 1984, Sugio Hayama, a biologist at Kyoto University in Japan, videotaped the inside of a chimpanzee’s throat to study its reflexes under anaesthesia. The video also happened to capture a moment when the chimp woke and began hollering, softly at first, then with more power.

Decades later, Takeshi Nishimura, a former student of Hayama and now a biologist at Kyoto University and the principal investigator of the recent research, studied the footage with renewed interest. He found that the chimp’s vocal lips and vocal cords were vibrating together, which added a layer of mechanical complexity to the chimp’s voice that made it difficult to fine-tune.

Nishimura and his colleagues wondered whether vocal lips played a significant role in primate communication generally, so they set out to study the throats of as many primate species as they could.  The presence of an extra membrane in all the animals was surprising and vindicating.

“People have been talking about evolutionary changes in our throats and oral cavity for many years, but this is the first time we took a close look at the larynx in a large selection of monkeys and apes,” said William Tecumseh Fitch, a biologist at the University of Vienna in Austria and one of the authors of the paper.

Asif Ghazafar, a psychologist at Princeton University, US, who was not involved in the research, said: “No one’s done a systematic evaluation like that. We didn’t have a large sense of what primates had it and what primates didn’t. We kind of had a guess, but this study nailed it.”

The ubiquity of the vocal lips did not necessarily mean that they affected the sounds their possessors produced. So Nishimura’s group removed the larynges from three deceased chimpanzees and attached them to simulated lungs; they did the same with six rhesus macaques that had been euthanised for other approved experiments.

In all the simulations, the vocal lips and the vocal cords vibrated in unison. Mathematical models of other primates’ larynges yielded similar results.

In their paper, the researchers propose that the absence of vocal lips — and their complicating vibrations — in humans was a key factor in the evolution of language in our species. Vibrating in splendid isolation, our vocal cords allowed for subtle changes in inflection and register that characterise our own speech. We reason and cajole, plead and suggest, all in a controlled manner.

“This study has shown that evolutionary modifications in the larynx were necessary for the evolution of spoken language,” Nishimura said.

Rendall added: “It suggests, or reinforces, that there’s a completely different change in tactic from human communication to nonhuman primate communication. Human language doesn’t target the emotional response, but you’re trying to change their mind — you’re hitting the cognitive and inferential systems.”

Still, Rendall said, primates often speak softly and subtly, and humans often communicate through screams and yells. He recommended a “healthy scepticism” in extrapolating from the  anatomical finding the origins of complex speech and language.

“I think they’ve just highlighted the fact that this loss of membrane in humans is probably centrally important to our ability to produce these stable vocal fold vibrations, which underlies the production of speech sounds,” he said.

Harold Gouzoules, a psychologist at Emory University, US, who wrote an accompanying commentary to the recent paper, agreed. “Establishing causality here is essentially impossible,” he said. “It might be a necessary step in the evolution of language, but whether it is absolutely critical remains to be seen.”

Gouzoules said that the research was most noteworthy for its comparative analysis of primates and its ability to draw evolutionary insights, to a degree, from simple anatomy, which often hides in plain sight. “Language is clearly more than the sum of its parts,” he said. “It’s just not likely that we’re ever going to have a completely satisfactory explanation.”