Alcazar SUV is bigger and plusher

The latest offering from Hyundai isn’t just a seven-seater Creta, it also introduces the Nu series of petrol engines 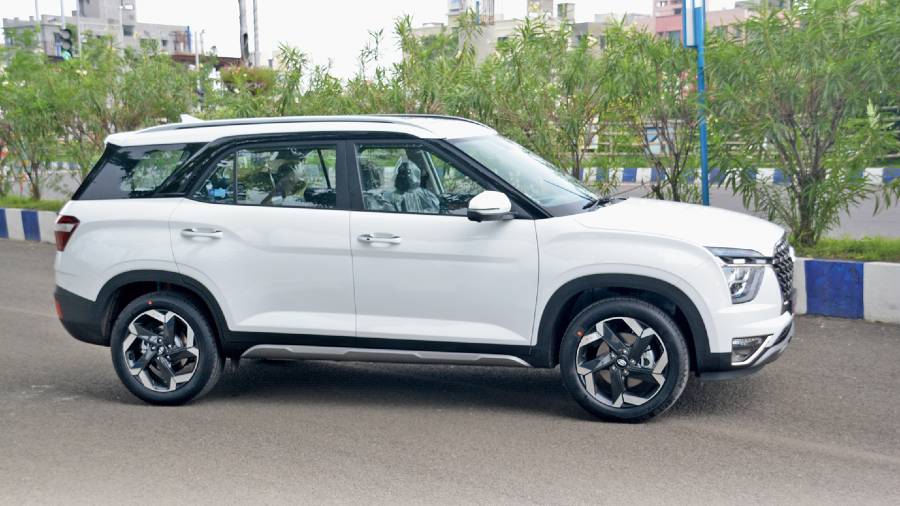 The seven-seater SUV is the flavour of the season and the latest one to join the ranks is the Hyundai Alcazar. Based on the company’s bestselling Creta mid-size SUV, this is, expectedly, very similar in many ways, but there are significant differences as well even apart from the seating configuration. t2oS borrowed a petrol manual and a diesel automatic from Gajraj Hyundai in Calcutta and spent some time with them to get a feel. Here are our impressions.

The exteriors of the Alcazar are mostly the same as that of the five-seater Creta up to the end of the front doors. There is what Hyundai calls a ‘signature cascading grille’ up front, but it swaps out the the egg-crate look for a new squared pattern.

The changes become visible once one moves to the side. This SUV is 200mm longer than the five-seater and its wheelbase is extended by 150mm, making it the longest in the segment. The tailgate looks more upright and the blacked-out pillars give the impression of a floating roof. The 18-inch alloys fill out the wheel wells quite nicely.

The tailgate gets a chrome strip connecting the two tail light clusters, which are of a new design. This set, like the ones on the Creta reflect the design of the headlamp cluster, but in a different sort of way. When it was launched, the design of the Creta split opinions rather sharply. More than a year down the line, it has grown on us. So we quite like the look of the Alcazar on the whole and it appears quite premium too.

Considering that the Alcazar is a Creta derivative, lots of things have been carried over from the smaller vehicle. Apart from the colour scheme of the interior, which is now black and a shade called Cognac Brown, things remain much the same up to the front seats, which are ventilated in the top trim.

(L-R) The familiar interior looks good in Cognac Brown; the third row is good for smaller persons; the middle row in the six-seater gets a lot of goodies

The changes start from the second row. Here, the Alcazar offers the option of a bench (7-seater) or a pair of captain’s seats (6--eater) with a console between them that has cupholders and a wireless phone charger. The 6-seater configuration is the plusher of the two. The front seat backs have two folding tables that can support tablets or other things. There are also charging ports for this row and the de rigueur aircon vents and window shades. This row of seats also moves forwards and back, so legroom can be adjusted for both this and the third row.

Which brings us to the raison d’etre for the Alcazar. The third row. With the mid row seats flipping forward, getting in and out isn’t a problem. Good thinking by Hyundai here. But even with the wheelbase stretched by 15cm, this would be a comfortable place only for children or smaller persons.

Of course moving the second row forward helps matters. But it doesn’t feel claustrophobic, thanks to the panoramic sunroof and decent glass areas around. This row also gets its own aircon vents and charging ports. The Alcazar comes with an air purifier to maintain air quality in the cabin.

The Alcazar is coming with two engine options, a petrol and a diesel, as well as two gearbox options, a six-speed manual and a six-speed torque convertor (traditional) automatic, making four engine-gearbox combinations.

The diesel is the same 1.5-litre unit that does duty in the Creta. It makes 115ps of power and 250Nm of torque over a fairly wide rev range. One of the variants we drove had this paired with an automatic box.

The tailgate is quite upright but the floating roof looks quite good.

This combination offers a very low-stress driving experience. With the torque peaking at a low rev of 1,500rpm and staying there for another 1,000rpm, there is lots of pulling power in most normal driving situations and the gearbox is set to keep the engine near the sweet spot. Plus, it offers an Eco mode for fuel-efficiency as well as a Sport mode for some fun, apart from the Comfort mode. There are Mud, Sand and Snow modes too for traction, but given that this is two-wheel drive, one should ideally not get terribly adventurous with it.

The other engine is a new one in Hyundai’s Indian line-up. It is 2-litre, third-generation Nu series petrol. It makes 159ps of power and 191Nm of torque. This is quite a smooth-revving unit and breezy to use. This one came paired with the six-speed manual.

With enough power to play with and a gearbox that shifts smoothly, it is up for some spirited driving. The speed limits come up just too soon nowadays and a degree of joy has to be sacrificed at the altar of prudence. Wish we were a little reckless sometimes.

Both the petrol and diesel variants we drove offered excellent ride quality. It is a little on the softer end of the scale, but not wallowy. One always had the SUV under control. We think that the 18-inch wheels make some difference. What is good is that in spite of the lower profile of the tyres on the larger rims, it did not foul with the ride quality. The longer wheelbase probably helps here too. The ride is very plush indeed, especially if one is in the captain’s seats.

While both the petrol and diesel are quite quiet on the road, some noise tends to seep into the passenger compartment if the engines are revved hard. But that is, perhaps, only to be expected.

There is a full complement of active and passive safety features, like six airbags, stability and traction aids and all-wheel disc brakes.

It is difficult to find fault with the Alcazar in its segment and price range. Plus, the features list is a mile long. Honestly, we cannot think of a good reason to not buy it for city or highway.

THE ALCAZAR IN NUMBERS

“Initially we thought the launch would be in April, then May, but the company has rightly decided to launch post the peak of Covid has passed.

“Booking and enquiries have been extremely good. Given the Covid atmosphere we thought it might be subdued, but it’s not. The highest demand is of the top model, which is Signature.

“The response is better than for the Creta right now. That could be because of the novelty factor. Now, this is the most in-demand car in Hyundai. This seven-seater from Hyundai was a long-awaited vehicle. People have been asking Hyundai for a seven-seater as it has great brand appeal and its cars are feature-loaded, fuel-efficient, and easy to service.”