If you are new to the video game, Oppo Reno5 Pro 5G has plenty of sparks to offer 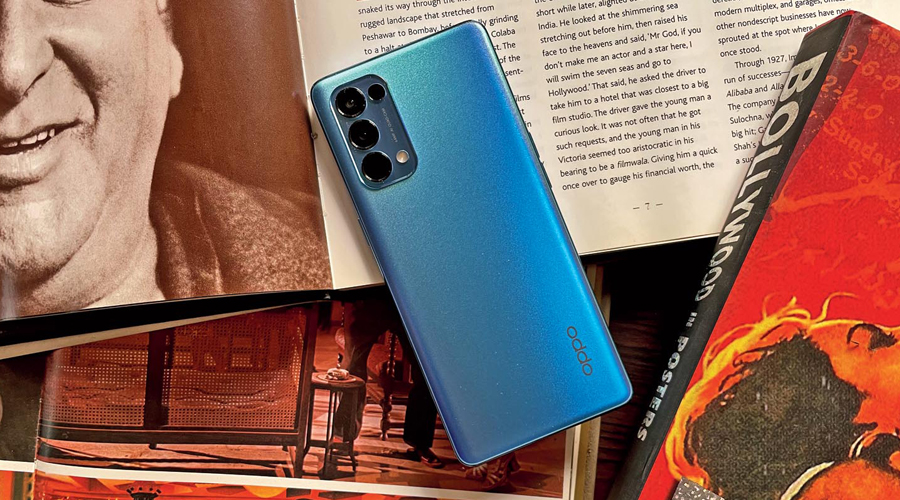 Oppo Reno5 Pro 5G is packed with features on the video front and it comes with the snappy MediaTek Dimensity 1000+ processor.
Pictures: The Telegraph
Mathures Paul   |   Published 20.01.21, 01:59 AM

During the pandemic, our app usage pattern has changed. Many of the apps that ruled till even March last year now appear irrelevant. Over the last one year video-driven apps have attracted a lot of traffic. We are still Instagram-ing but still photos are taking a backseat among the youth. The 60-second time limit on Instagram videos is bringing out the best in many.

Smartphone brands have started reinventing themselves and in 2021, focus will be on mobile phone videos as well as 5G, which is yet to begin its marathon run in India but there’s no harm being hopeful. Speaking of videos, the Oppo Reno5 Pro 5G appears promising. Yes, there are some gimmicky features to up the gimmicky quotient on some media platforms but hey, there are many things worth speaking about on the new phone.

Stepping up the video game

Let’s begin with video. Obviously! The 64MP main shooter is kept company by an 8MP ultra wide-angle camera to offer a few neat tricks. Be it colour saturation or brightness, videos taken under broad daylight comes through well. There are four settings to lock in on and we tried them all under sunshine and around 8pm.

Shooting a plain simple video under well-lit conditions offers no challenge. Next, turn on the AI mode, which basically uses technology to get the best out of videos. The mode came in handy at night, brightening things up just about enough without adding too much in the contrast department and neither did it brighten up the scene to the point that it looked like a different time in the day. Third, turn on ultra-steady for steady shots. No complains. Next, there is something called ultra-steady pro, which makes things even better but has almost no use under poor lighting.

Overall, good work but it’s difficult to find one’s self around the video menu. While AI and steady mode pops up on the top, for ultra-steady pro it’s a tiny toggle button above the camera menu.

Giving the video department a face lift is the dual-view video mode, which is accessible under the ‘More’ tab inside the camera app. Basically, it allows you to record videos using the front and back shooters simultaneously. It’s a helpful feature for vloggers who want to explain something they are seeing on the screen. There is an option for layout. The front-facing camera feed can take up half the screen, become a rectangle on the feed from the back shooter, or even take the form of a circle.

There’s more in the video section. Tap a button (again, frustratingly somewhere on the screen) to turn on video bokeh, which can be adjusted. The output is fairly good and highlights the degree to which mobile phones have developed. In the same breath, if you are planning to shoot furry friends then it’s best you keep bokeh effect down to 15-20 per cent.

Also included is a set of fun filters for videos. For example, if your subject is wearing red, there is the possibility to shoot the video in black and white while keeping the red intact. Same goes for green and sky blue.

Sticking on with the camera, photographs are quite good. But once again, it seems that 2021 is 2020 because macro and mono shooters have been included, which is basically a way of saying, “Look ma, I have four cameras.” There is an ‘Extra HD’ option while taking photos. And that is clearly the winning feature here. What you miss in a “normal” shot with the 64MP camera — like some text at a great distance — gets captured with this mode. At the same time, there is no delay while taking the shot. As for night photos, it’s as good as it gets in the mid-range flagship phone. The autofocus mechanism is quick even in uneven lighting.

Many ups and a couple of quibbles

Besides video, a lot of shout-outs are going out on social media for the device being powered by the MediaTek Dimensity 1000+ processor. There are plenty of benchmark scores that can be offered but, frankly, it’s best not to because to a user all that matters is whether the phone is fast enough, charges up well and if it lasts more than a year. Yes, this is the era when some phones last only a year!

Anyway, the processor is snappy enough to make all kinds of gaming smooth, especially given the brilliant quality of the screen. Even while gaming the phone doesn’t heat up and switching between apps is quick. In the camera department, the photos can be taken at the blink of an eye while read-write speeds are also up to scratch.

The 6.5-inch AMOLED display with curved edges is beautiful. Coming with full-HD+ resolution, peak brightness of 1,100nits and 90Hz refresh rate, there is nothing that can stop you from staying glued to the screen. Equally good is its 173g weight while the camera bumps are barely there.

Before coming to the two issues we have with the phone, here’s another brownie point for the phone. Battery life is good enough for a day while it can charge up completely in 30-odd minutes.

Well, for a display this good, stereo sound would have been a great addition. Second, there is no microUSB slot, which means you will get 128GB onboard storage to play around with.

The phone offers competition to Samsung Galaxy S20 FE and Xiaomi Mi 10T Pro 5G but what I am looking forward to is the spec sheet of the upcoming OnePlus, which is still sometime away. The new Oppo phone gives us a rough idea of the features one will find on OnePlus. Meanwhile, if you are new to the video game, Oppo Reno5 Pro 5G (Rs 35,990) has plenty of sparks to offer.

Oppo Reno5 Pro 5G could have flown higher had it…

Photos taken around 9.30pm — with only a distant light source — came out well in way of details. The same applies for videos.

Apple Store Online has some great offers coming your way

In case an Apple product is on your buy-buy list, wait for January 21. Apple Online Store has some special offers and they look pretty good.

In case you place orders for over Rs 44,900 — chances are you would! — there is a cashback offer of Rs 5,000. Also available will be no-cost EMI for six months on HDFC Bank credit cards and credit card EMIs only.

Highlighted right at the top of the Apple Store India page, all you have to do is make a single purchase of Rs 44,900. The cashback we spoke about cannot be clubbed with the store’s reduced pricing schemes for education.

If an iPhone 12 is on your wishlist, make good use of the Apple Online Store offer.
Picture: Apple

So what can you buy? Besides the new iPhone 12 series devices, the iPhone 11 series is still going strong and the iPhone XR continues to find customers even though it’s been a couple of years. You can also purchase a MacBook Air or Pro or even a Mac computer. Options are in plenty!

The Apple India Online Store went live in September last year and has already gained a lot of traction. While shopping for Apple products, you can get all shopping questions answered by Apple Specialists, ensuring you choose the right product, something that suits your needs. There is also a good trade-in programme using which you can exchange your smartphone for credit towards a new iPhone.

Coming back to the offer, there are a few caveats and Apple says it can revise or withdraw the offer without prior notice.