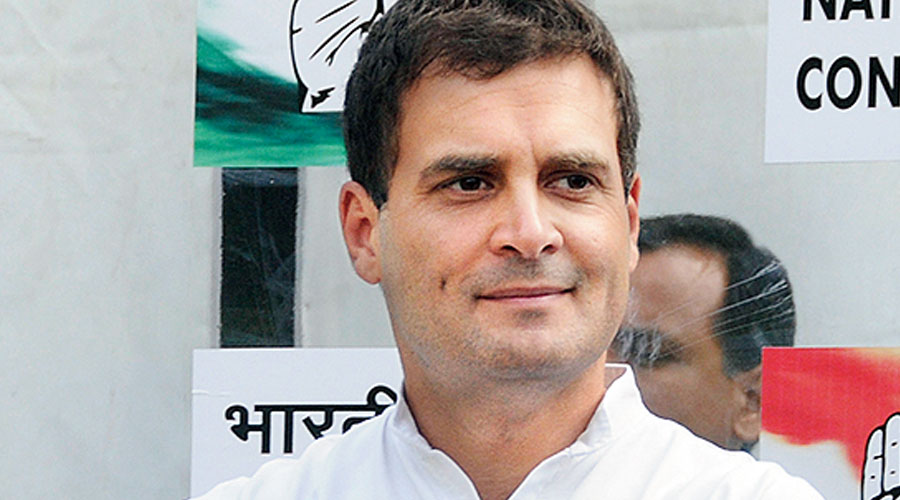 The Bharatiya Janata Party leaders who had gone all out to demonize the farm protesters, terming them “anti-nationals”, “Maoists” and “Khalistanis”, made a quick U-turn on Friday after the prime minister, Narendra Modi, capitulated and announced the rollback of the three contentious agricultural laws. They hailed Modiji’s “statesmanlike” decision and stressed his “sensitive” approach towards even a section of farmers. The former law minister, Ravi Shankar Prasad, who had said that the “tukde-tukde gang” was using the farmers’ protest to endanger the country’s unity, went a step further and reportedly dubbed Modi’s move historic and courageous.

Privately, however, many of them appeared to be angry — not so much because their self-proclaimed 56-inch-chested leader had bowed down before the protesters but more because Rahul Gandhi had been proven right. The Congress parliamentarian had said in January this year: “Mark my words. Take it from me. These laws, the government will be forced to take them back. Remember what I said.” Now the same BJP leaders will have to think twice before they pounce on Rahul to deride him as ‘Pappu’.

Samosa, chaat, dahi vada, jalebi — just when everyone thought that losing the bypolls to two assembly seats in Bihar led to Lalu Prasad falling ill and flying from Patna to Delhi, the real culprits were nailed. It has come to light that Lalu, during his two-week stay in Patna, was gorging on all kinds of snacks that were not available to him while recuperating at the residence of his eldest daughter and Rajya Sabha member, Misa Bharti, in the national capital.

“He would be sitting surrounded by so many leaders and old timers, who lovingly brought varieties of eatables with them. At times Lalu ji would also wish to eat something and they would rush to bring it. It seems he flouted all the medical advice and had to be hurriedly taken back to Delhi. The doctors in Delhi are considering sending him to Singapore, where one of his seven daughter[s] stays with her family, or to London for treatment... But [I] am sure he will cross all the hurdles there too when it comes to food,” an MLC close to him confided.

One of the senior-most leaders of the Congress in the country and five-time Mizoram chief minister, Lal Thanhawla, recently revealed his decision to not contest the 2023 state polls as well as to quit the state Congress chief’s post due to advancing age. He is 83. This would pave the way for a new leader. Thanhawla had been the state Congress chief since 1973, barring two years. The Congress lost the last assembly polls to the Mizo National Front. Thanhawla lost from both the seats he contested but the party persisted with him.

Among Thanhawla’s most important contributions was his decision to step down as CM for the smooth implementation of the historic Mizo peace accord signed in 1986 to end insurgency. To this day, Mizoram remains the most peaceful state in the volatile Northeast. The Mizoram Congress unit is understandably guarded in its reaction, waiting for a formal announcement. Thanhawla had wanted to quit before the last assembly polls, too, but changed his mind due to the threat posed by the BJP and the MNF. Things are no better for the Congress this time round but his departure could make its task even more difficult, despite the leader’s desire to work for the party even after quitting his post. The Congress’s free fall in the Northeast has continued since the BJP stormed to power at the Centre in 2014.

The game is on

Just when hooch tragedies were spiralling out of control in dry Bihar, the CM, Nitish Kumar, played a masterstroke. He brought back the Indian Administrative Service officer, KK Pathak, to lead the prohibition and excise department — a move that has struck fear in the hearts of all and sundry.

Pathak was the architect of the infamously draconian law brought in to ban liquor in the state in April 2016. He took his work so seriously that he did not even spare leaders of Kumar’s Janata Dal (United), which led to his transfer. “We don’t know what he is going to do so we will lie low in matters related to spirits. We will wait and watch. Moreover, he will not listen to anybody even more because of being brought back by the chief minister himself,” a person at a high position said.

Oommen Chandy is someone who refuses to slow down in spite of his advancing age. The 78-year-old former CM of Kerala, who was peeved at being ignored during the selection of new office-bearers in the state, recently met the Congress chief, Sonia Gandhi, to air his grievances. While the state party president, K Sudhakaran, and the leader of the Opposition, VD Satheesan, are known to have been working hand in hand to eradicate factions led by Chandy and Ramesh Chennithala, the veteran leader has made it clear that no one can ignore him and his interests.

Although the new state leadership has been trying to usher in drastic changes with a hitherto unheard of “semi-cadre” system in the party, Chandy is not one to give in so easily. The fighter in Chandy, who still holds sway over the Christian vote bank in south and central Kerala, is simply not ready to yield before the younger lot of leaders.

The former Karnataka CM, HD Kumaraswamy, has lately been training his guns on a ‘senior Congress leader’ — possibly the leader of the Opposition, PC Siddaramaiah — for trying to poach Janata Dal (Secular) lawmakers. But even Kumaraswamy’s allies wondered what the Congress had to gain from this since turncoats from both parties have moved to the BJP in recent years. As some say, it is a low tide in the love-hate relationship between two leaders.