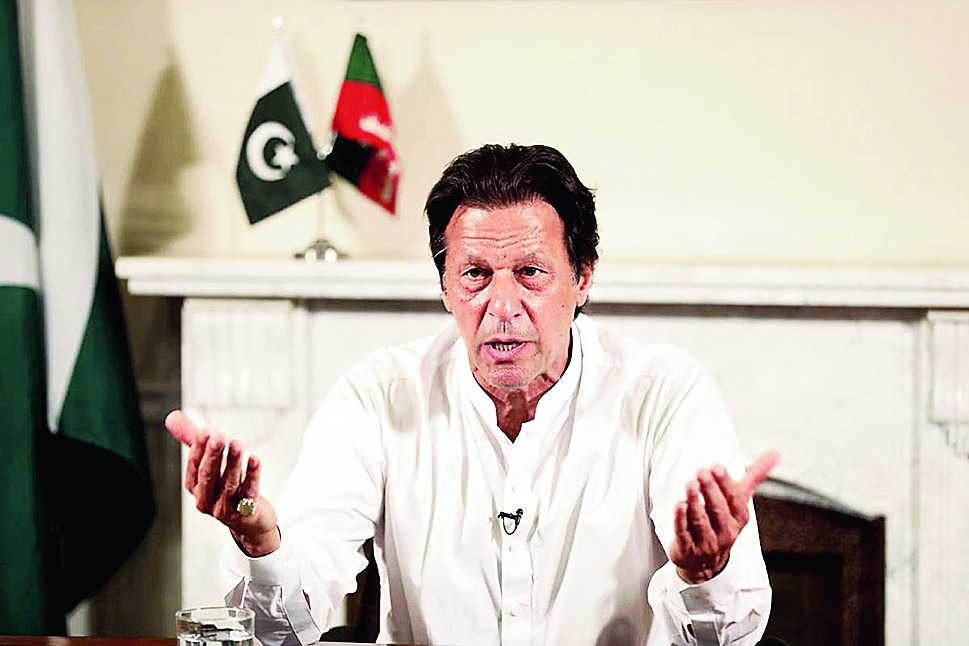 When a difficult neighbour offers unsolicited help during a moment of crisis, you can do one of two things. You can choose to be large hearted - for it is much tougher to receive than to give - and accept the offer, seizing the opportunity it provides for a possible rapprochement in a bitter and quarrelsome relationship. Or, eschewing idealism and hope, you can politely decline it with a 'thank you, but no thank you' response.

India, last week, did neither. The government of India's rejection of the offer of aid from the United Arab Emirates for the flood-ravaged state of Kerala triggered a huge controversy which refuses to die down. But the gesture from Pakistan was treated in a far more cavalier manner. No one bothered to even acknowledge it.

The offer had been made not by some lowly official in Islamabad but by the newly elected prime minister, Imran Khan. On August 23, Khan had tweeted: "On behalf of the people of Pakistan, we send our prayers and best wishes to those who have been devastated by the floods in Kerala, India. We stand ready to provide any humanitarian assistance that may be needed."

Given how prickly India's officialdom is about receiving aid from abroad, there was little chance of taking any help from Pakistan. But when a new regime is elected to power next door, and its new leader makes a graceful gesture, the least New Delhi could have done was respond with a note of appreciation. Instead, there has been only silence so far.

This churlishness on part of India is not confined to the issue of flood assistance for Kerala alone. For the last few weeks, ever since Imran Khan's Pakistan Tehreek-e-Insaf emerged as the single largest party in the country's general elections, it is Islamabad which is making all the right noises about peace and friendship. New Delhi, in contrast, has been muffled and grudging in its response.

Imran Khan, it is true, is a controversial figure. The legendary cricketer who was once the most famous playboy of the eastern world is said to have metamorphosed into a conservative hardliner, with close links with the Pakistani army and sections of Islamist fundamentalists. But it is also true, as Imran Khan has himself pointed out, that he has had closer ties with India than any other Pakistani leader. He made numerous visits to this country during his cricketing days and the bonds he established lasted well past his retirement from the game.

More important, he is now the elected leader of Pakistan. And every time a new person comes to power in either country, there is renewed hope that a fresh attempt will be made at reconciliation - or at least at reducing the rancour and hostility that have been the bane of both nations.

It is this sense of hope, perhaps, that impelled the then prime minister of Pakistan, Nawaz Sharif, to attend the swearing-in ceremony of Narendra Modi in the summer of 2014. Although Pakistanis had reasons to be wary of Modi - a dyed-in-the-wool Rashtriya Swayamsevak Sangh pracharak who had mocked Pakistan during election campaigns in Gujarat - Islamabad had responded to his invitation with alacrity.

Unlike Modi who made a great show of his oath-taking ceremony by calling leaders of the Saarc nations to attend it, Imran Khan did not invite foreign leaders to his swearing-in. But in his very first speech on July 26, when the votes were still being counted, he reached out to India.

While admitting he was "saddened" at how the media in India "portrayed me as a Bollywood film villain", Imran Khan pointed out that "I am the Pakistani who has the most familiarity with India, I have been all over that country."

He went on to tell the Pakistani people that "it will be very good for all of us if we have good relations with India. We need to have trade ties, and the more we will trade, both countries will benefit." Of course, he did refer to Kashmir as "a core issue" but said that "Pakistan and India's leadership should sit at a table and try to fix this problem. It's not going anywhere."

Candidly admitting that India-Pakistan relations were at "square one right now", the then prime minister-elect gave the very large - even if largely silent - constituency for peace on both sides of the border some reasons to cheer. "If India's leadership is ready, we are ready to improve ties with India. If you step forward one step, we will take two steps forward. I say this with conviction, this will be the most important thing for the subcontinent, for both countries to have a friendship."

Four days later, on July 30, the Indian prime minister called up Imran Khan to congratulate him on his party's success in the election. But what exactly was exchanged between the two remains opaque since the bland press release put out by the ministry of external affairs merely said, "Prime Minister expressed hope that democracy will take deeper roots in Pakistan. Prime Minister also reiterated his vision of peace and development in the entire neighbourhood."

A similar opacity marks the written communication sent by Narendra Modi to Imran Khan when the latter was formally sworn in as prime minister on August 18. The news of the letter came out only two days later when the newly elected foreign minister of Pakistan, Shah Mahmood Qureshi, referred to it and welcomed Modi's message about starting on the path of dialogue.

It was only then that unidentified government "sources" denied that any offer of talks had been made and said that Modi had only spoken of the need to pursue "meaningful and constructive engagement." It remains a mystery why the letter from the Indian prime minister to his Pakistani counterpart cannot be shared with the people of India.

One reason could be that with the Lok Sabha elections a few months away, the Modi government does not want to risk any peace overture that could cloud the aggressive, jingoistic and communally polarizing narrative that has been central to the Bharatiya Janata Party's outreach to voters in the last few years. The virulent attack by the BJP spokesmen on Navjot Singh Sidhu for attending Imran Khan's swearing-in and hugging the Pakistani army chief - unmindful of the fact that Modi had also hugged the then Pakistani prime minister, Nawaz Sharif, when he landed up without notice at Sharif's home - is a clear indication that ratcheting up anti-Pakistan sentiments is going to be part of the BJP's electoral strategy.

That would be a great pity. At a time when the new Pakistani leadership is repeatedly making gestures of friendship and stressing the need for dialogue, India's mealy-mouthed responses diminish our stature as the bigger country and reduces our claims of moral superiority.

The BJP, which is being rather unsubtle in its over-the-top commemoration of Atal Bihari Vajpayee, seems to have forgotten that it was Vajpayee's Pakistan policy that marked his place in history. The BJP might regard Pokhran II and economic liberalization as Vajpayee's great achievements. But Pokhran I had already taken place under Indira Gandhi and the Vajpayee-era development was a continuation of the process started by previous regimes.

But when it came to Pakistan, Vajpayee took unprecedented initiatives. It was not just his famous bus ride to Lahore but also his determination to keep the dialogue process going - in spite of Kargil, in spite of the December 13, 2001 attack on Parliament - and his sincere belief that peace was worth striving for even if it was not electorally expedient that gave him the reputation of a statesman, and not just a successful political leader.

Jingoistic sentiments are easy to whip up; sabre-rattling pays quick electoral dividends. But the truth is, whether we like it or not, India can never achieve its dream of being a great power, a " vishwa guru" till we establish peace with Pakistan. That is why self-professed hyper-nationalists, too, must grab every opportunity to start a dialogue, and keep it going in spite of pinpricks and provocations. Not doing so is letting the people of India down...