The BJP has a rather strange notion of facts

Amit Shah may yearn for a straitjacketed Indian history, but that cannot be produced ‘without disputing facts’ 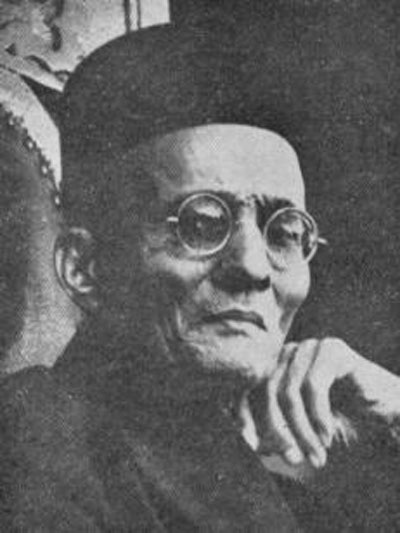 Amit Shah dropped a hint regarding the Indian perspective by referring to V.D. Savarkar (pictured), the champion of the Hindu rashtra, who, he said, first saw in the 1857 revolt the first war of independence.
(Wikimedia Commons)
The Editorial Board   |   Published 22.10.19, 08:47 PM

A lot of history is about fights — in the subject-matter as also over the perception of it. One of the joys of history is that it can be rewritten when new evidence comes to hand or new connections are made among facts. It is not clear, though, whether the Union home minister was thinking of facts and evidence when he said that history needs to be rewritten from the Indian point of view. Known for his forthrightness, Amit Shah seemed a little coy as he suggested that historians — he used the first-person plural — come forward to do this rewriting. Mr Shah dropped a hint regarding the Indian perspective by referring to V.D. Savarkar, the champion of the Hindu rashtra, who, he said, first saw in the 1857 revolt the first war of independence.

That suggested the path the new history might take. Mr Shah blamed the Indian tendency to blame the British and added leftists and Mughals to the list of those who distorted history. The last two are obviously not ‘Indian’. The rewriting can be done without disputing facts, said Mr Shah, but the Bharatiya Janata Party has rather a strange notion of facts. A Class X text in Rajasthan now declares that in the battle of Haldighati between Rana Pratap and Akbar’s forces the Rana won. If this is the kind of rewriting — or mythologizing — that Mr Shah is seeking of his historians, the prime minister excels in it. He celebrates India’s glory by reading myths literally, discovering in Ganesha’s head the success of plastic surgery. The biggest court case today represents a tussle over an epic hero’s birthplace. This Hindutva heaven-on-earth being created provides the perspective from which Mr Shah and his ideological siblings regard the Mughals as ‘outsiders’, and members of the largest minority community as descended from them. Is that what Mr Shah was coyly suggesting — history with the ‘outsiders’ written out? That would eliminate some of the most valiant fighters against the British — but those unpalatable bits could be dropped. There can be no black-and-white representation of India’s multiple histories, whether of the southern kingdoms, or of the east or the Northeast, or even of the ‘Hindi’ belt. Mr Shah may yearn for a straitjacketed Indian history, but that cannot be produced ‘without disputing facts’.