POLTICS AND PLAY | The anonymity of Mahadev Desai is unwarranted 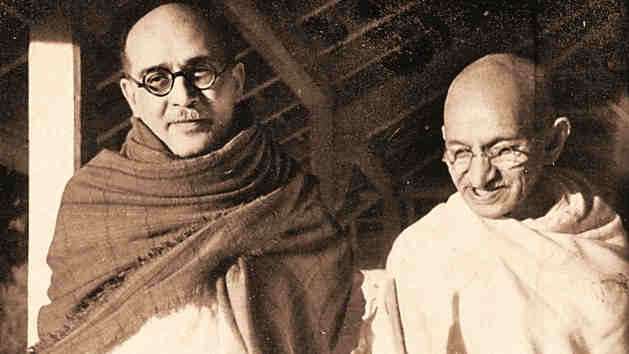 Like all other Indians, I grew up thinking of August 15 as the day when, back in 1947, the first government of independent India was sworn into office. However, in recent years the day has acquired for me another meaning, not unrelated to the first. In my consciousness, August 15, 1947 has been joined by August 15, 1942, which is the day that Mahadev Desai died in prison. Without his contributions, India might never have become free of British rule at all, and yet this great patriot and freedom fighter remains largely unhonoured today.

Perhaps he would have wanted it that way. From the time he joined Gandhi in Ahmedabad in 1917 until his death in the Aga Khan Palace a quarter of a century later, Mahadev entirely submerged himself in the service of the Mahatma. He was Gandhi’s secretary, typist, translator, counsellor, courier, interlocutor, trouble-shooter and much more. He even cooked for his Master, his khichdi in particular attracting Gandhi’s praise.

The best testimony to Mahadev Desai’s indispensability to Gandhi’s work and campaigns comes from the Mahatma himself. In 1918, a year after Mahadev joined the Sabarmati Ashram, Gandhi told his nephew, Maganlal, that his secretary “has come to be my hands and feet, and my brain as well, so that without him I feel like one who has lost the use of legs and speech. The more I know him, the more I see his virtues. And he is as learned as [he is] virtuous”. Twenty years later, when Mahadev came close to a breakdown because of over-work and his refusal to take a holiday, Gandhi scolded him thus: “Shall we say you have a mania for work? Don’t you know if you were to be disabled, I would be a bird without wings? If you became bed-ridden, I would have to wind up three-fourths of my activities.”

One person who knew Mahadev Desai intimately was Gandhi’s English disciple, Mira Behn (Madeleine Slade). They first met when Mahadev came to receive her at the Ahmedabad station in November 1925, and they were together in prison when he died some 17 years later. In her memoirs, The Spirit’s Pilgrimage, Mira writes of Mahadev Desai that “he was tall, good-looking, with a mustache, and thinning hair on an intellectual head. By nature he was delicately sensitive, which showed particularly in his finely shaped hands. He had an extraordinarily quick and intelligent grasp of the complicated and ever-varying situations in which he was Bapu’s right hand, noting, discussing, drafting and writing, always in that swift and exquisitely clear hand. But the most striking thing of all about him was his intense devotion to Bapu. And in this was our strongest bond”.

When Gandhi was arrested in August 1942 after calling for the British to ‘Quit India’, he was imprisoned in the house of the Aga Khan in Poona, which had previously been requisitioned by the colonial state for this purpose. With him were a few close associates, Mahadev Desai and Mira Behn among them. Knowing that this would be a long prison term, on the evening of August 14, Mahadev told Mira, “What a grand opportunity this would be for writing. I have at least six books in my mind which I would like to get down on paper...”

The next day he was dead, of a heart-attack, aged 50. A day later, the suitcase Mahadev had brought with him to the prison was opened by Gandhi. Apart from his clothes, it contained a copy of the Bible (presented to him by the British Quaker, Agatha Harrison), some newspaper clippings and several books, among them a copy of Tagore’s play, Muktadhara, and a book called Battle for Asia.

A scholar of Gujarati and English literature, with a deep interest in history, politics and the law, Mahadev Desai was perhaps the most learned of all Gandhi’s associates. The American historian, Ian Desai, has studied the books Mahadev read and made notes on, writing of how he passed on the information he gleaned to Gandhi, who was himself rather poorly informed about such subjects as political theory and international politics. In a fascinating essay published some years ago in the Wilson Quarterly, Ian Desai remarked that Mahadev “was the heart of this intellectual operation [of the freedom struggle], helping Gandhi refine his philosophy over the course of his career and providing him with concrete information to use in his ideological struggle with British imperialism”.

Mahadev’s love of learning also features in an obituary published in The Manchester Guardian. In 1931, Gandhi and his secretary spent several months in England attending the Second Round Table Conference. On this trip, recalled the obituarist, Mahadev “liked going into English homes and seeing how people lived. No sooner was he inside them that he would gravitate to the bookshelves. It could be seen how much he loved books by the way he handled them. And one could be quite sure of finding him in some bookshop if he had a few minutes to spare”.

While reading capaciously as well as closely, Mahadev never forgot his primary duty, which was to advise and assist Gandhi, and record for posterity all that his Master said and did. As Gopalkrishna Gandhi has observed, by diarising every event, noteworthy as well as insignificant, of Gandhi’s waking hours, Mahadev became the Mahatma’s “alter ego and what he recorded became a primary source”, indispensable for future historians and biographers. Mahadev’s diaries, writes Gopal Gandhi, “almost wrote themselves, like the works of the other ‘M’, whose name is inseparable from [that of the 19th century sage] Sri Ramakrishna”.

Mahadev Desai died on August 15, 1942. Gandhi, who was much older than him, lived on for more than five years thereafter. He missed Mahadev and his counsel till the end. In the last week of his life, when he was preoccupied on the one hand with restoring peace between Hindus and Muslims and on the other with healing the rift between Jawaharlal Nehru and Vallabhbhai Patel, Gandhi remarked to his grand-niece, Manu, “Today we miss Mahadev as never before. Had he been alive, he would never have allowed things to come to such a pass”.

Until I was in my forties, I myself had little understanding of what Mahadev Desai meant to Gandhi and to India. It was only while working on a biography of the Mahatma, and coming across a vast hoard of Gandhi’s personal papers previously closed to scholars, that I came to recognize Mahadev’s colossal contributions to our nation as well as his distinctive qualities of head and heart. After my book was published, my cousin, Subu, who is just a little younger than me but who had grown up in America, wrote saying that while he “certainly did not know of Mahadev Desai and his importance” before reading my biography, “now I’m convinced there wouldn’t have been an Indian Gandhi without him. I don’t understand why there aren’t statues to him across the nation”.

It may be hard to canvass money and support for such an admirable enterprise, but I do hope, at least, that some younger scholar fluent in both Gujarati and English will begin work on a new biography of the man. Many years ago, Mahadev Desai’s son, Narayan, wrote a life of his father, which is moving and informative, and an important contribution to the subject. However, it now needs to be complemented by a book written by a scholar who is not encumbered by family pieties, who can use primary materials which have since become available, and who can take the wider historical view. Like Gandhi, Mahadev Desai was utterly non-parochial. He was a man who respected and befriended women, a Gujarati deeply knowledgeable about other parts of India, a Hindu who abhorred and opposed majoritarianism, an Indian keenly interested in the rest of the world. He was also a talented and prolific writer, who had a wicked sense of humour besides. And through what he did for and with Gandhi, he had a profound impact on the history of his nation and the world. He would make a wonderful biographical subject.

I myself had to write about Mahadev Desai in connection with Gandhi, yet in the course of my research I discovered the extraordinary range of Mahadev’s own friendships while reading his correspondence with such people as the anglicized Kashmiri, Jawaharlal Nehru, the Indianized Englishwoman, Mira Behn, the Tamil Sanskrit scholar, V.S. Srinivasa Sastri, and the Catholic private secretary to the viceroy, Gilbert Laithwaite. Among my most joyous discoveries was a photograph of Gandhi on his morning walk in Sevagram, circa 1936, accompanied by Khan Abdul Ghaffar Khan and Mahadev Desai, both dressed in khadi, the tall Pathan’s hand affectionately draped around the shoulders of the diminutive and ever-smiling Gujarati.

On this Independence Day, we remember the men and women who helped make our nation — B.R. Ambedkar, Abul Kalam Azad, Subhas Chandra Bose, Kamaladevi Chattopadhyay, Birsa Munda, Dadabhai Naoroji, Jawaharlal Nehru, Vallabhbhai Patel, Bhagat Singh and many others. As honourable and admirable as any on that list was Mahadev Desai, who died exactly five years before the freedom he so nobly and selflessly fought for finally arrived.