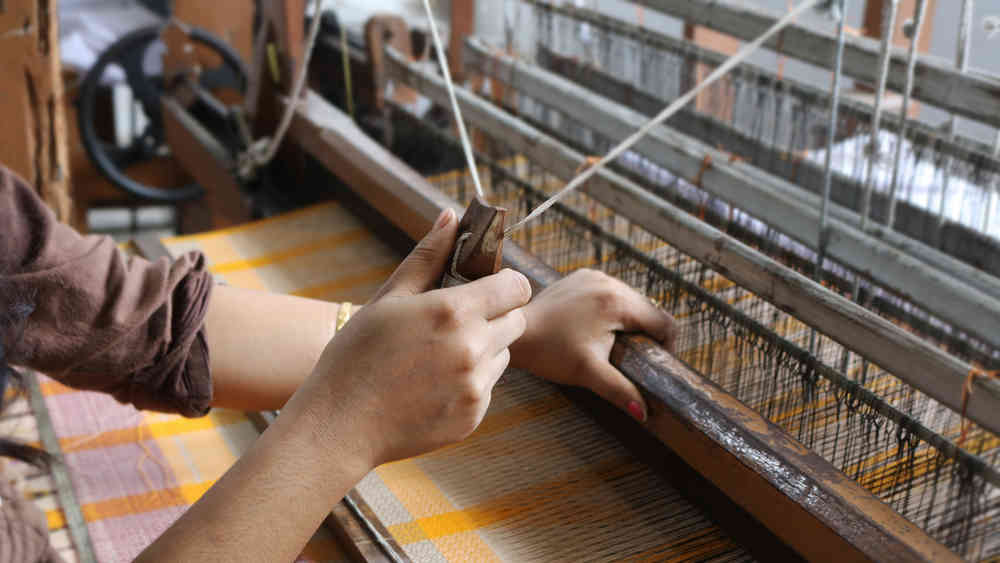 On National Handloom Day, the Centre set a stiff target for the textile ministry by calling for quadrupling handloom export to 10,000 crore and doubling production in the next three years. This vision uplifted the mood amidst the gloom that has pervaded this pandemic-stricken sector. According to data published by the director-general of foreign trade, handloom products recorded a negative growth rate of 32 per cent during the first quarter of 2020 vis-à-vis that of 2019. Consequently, artisans have been forced to take up menial jobs to survive.

According to the Fourth All India Handloom Census (2019-20), the sector provides livelihood to 31.45 lakh weaving households. Despite its cultural and economic significance, 67.1 per cent of the households have a monthly income lower than Rs 5,000. The pandemic has worsened the industry’s already vulnerable state, with irregular or no supply of yarn and dyes and the collapse of marketing channels. Since the sector operates within the informal economy, the impact has been more severe coming on the heels of the twin shocks of demonetization and GST.

In 1979, the Sivaraman Committee Report noted, “every new powerloom made six handlooms redundant and led to large scale unemployment in the rural area”. The conclusions drawn by this committee and by others led to the passing of the Handloom Reservation Act, 1985 whereby 11 basic essential items were reserved to be produced only on handloom. Unfortunately, the recommendations have not been strictly implemented.

The government introduced handloom marks in 2000, the Geographical Indications Act in 2003, and the India Handloom Brand in 2015 to promote handlooms; however, these measures have failed to deliver. Worse, the Centre has abolished the All India Handloom Board and the All India Handicrafts Board. The budget announcement of setting up textile parks is likely to benefit the powerloom sector since handloom weavers mostly work out of their homes. The infrastructure model of creating common weaving centres, such as the ones established in Kota and Pochampalli, has been unsuccessful, while efforts to register handloom units as MSME units have not borne fruit since field-level functionaries are officials from the directorate of textiles who have no connection with those of the MSME department in the districts.

The ailing handloom industry can be resuscitated through robust, disruptive interventions. Handloom and powerloom industries must be treated as separate entities. The textiles ministry prepares a single consolidated policy in which the policy for handlooms remains a poor cousin. The share of handloom cloth production, which stood at 24.98 per cent in 1980-81, accounted for a meagre 15.02 per cent. Similarly, exports of handloom products have reduced from $370 million in 2013-14 to $353 million in 2017-18. This is because the marketing of handloom products is clubbed with the overall marketing policy for textiles that largely includes powerloom products. The handloom sector cannot compete with the powerloom sector in mass production, pricing, design and market penetration. Handmade textiles are rare, luxury items. A separate policy for the handloom and the craft sector is a must so that these niche products can access niche markets. Thailand has successfully marketed ‘Thai Silk’ as an aspirational product. India needs to market its handmade textiles similarly. The government should integrate handmade textiles as part of the ‘creative economy’ and position them for export or for a niche domestic market. It has to be given the tax concessions of an export-oriented MSME unit and a separate National Handloom Policy drafted. The handloom sector could be shifted either to the ministry of commerce or to the ministry of micro, small and medium enterprises. The government should include the industry under MSME to avail the benefits of the Aatmanirbhar Bharat scheme.

The unprecedented pandemic demands long-term solutions. To this end, the Parliamentary Advocacy Group on Handlooms and Handicrafts mooted by this author and the recently constituted committee tasked with the responsibility of suggesting strategic and policy formations for the growth of the sector would, hopefully, succeed in revitalizing the handloom industry.