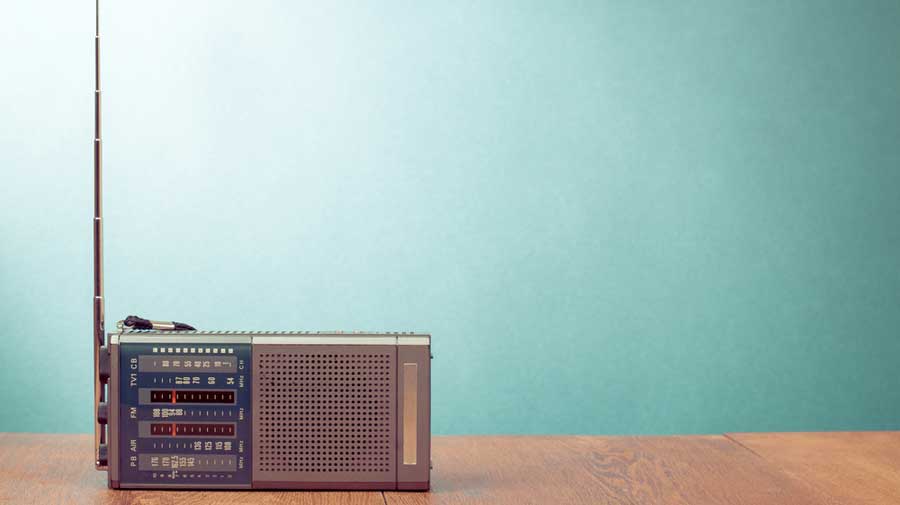 The last time the radio was so important to me was more than half a century ago when its monopoly of broadcast news and entertainment made it a necessary part of the desi day. Radio Ceylon, Vividh Bharati, the radio plays on Hawa Mahal, the commercials in between song requests, Ameen Sayani’s magical voice on Binaca Geetmala, the news on the hour with Surajit Sen gruffly going, ‘This is All India Radio, the news read by...’ together made up the soundtrack of our lives. Literally. Anubhav, released in 1971, featured Tanuja and Sanjeev Kumar playing a young couple in a fraught marriage, and it was much praised for its everyday realism because Akashvani’s radio commercials played constantly in the background.
Shutterstock
Mukul Kesavan   |   Published 13.12.20, 03:10 AM

Home-bound during the pandemic, I’ve rediscovered the radio. As newspapers, with a couple of honourable exceptions, merge into an all-India chorus conducted by the Central government and as television news channels race against each other to make performative sycophancy a competitive sport, internet radio has become a sanity-dispensing machine.

The last time the radio was so important to me was more than half a century ago when its monopoly of broadcast news and entertainment made it a necessary part of the desi day. Radio Ceylon, Vividh Bharati, the radio plays on Hawa Mahal, the commercials in between song requests, Ameen Sayani’s magical voice on Binaca Geetmala, the news on the hour with Surajit Sen gruffly going, ‘This is All India Radio, the news read by...’ together made up the soundtrack of our lives. Literally. Anubhav, released in 1971, featured Tanuja and Sanjeev Kumar playing a young couple in a fraught marriage, and it was much praised for its everyday realism because Akashvani’s radio commercials played constantly in the background.

One difference between then and now is that the online radio I listen to doesn’t involve fiddling with tuning knobs. It’s available online and via a bit of magic that I never tire of, I can ask a smart speaker to play BBC Radio 5 Live and it will. The BBC is going through a difficult time; the ruling Tories dislike it because they think it’s too liberal and politically correct and doesn’t give conservatives equal time. They want to cancel the license fee and argue, plausibly, that in a world dominated by 24-hour news channels and private subscription services like Netflix and Amazon Prime and HBO, a public broadcaster has no sacred right to an anti-competitive subsidy.

Sitting in Delhi, listening to the BBC’s hosts lead conversations about Brexit even as the British prime minister flits between Brussels and London, I know that the critics are wrong. The case for the BBC, which is to say the case for an autonomous, non-partisan, publicly funded broadcaster, is best made by looking at the real-world consequences of not having one.

Take the farmers’ protests against the new agriculture laws passed by the Central government. It is obvious that we would be better informed about the issues involved if we had a credible, autonomous public broadcaster capable of organizing discussions and phone-ins and debates in which netas, kisans and the general public could have their say.

There are critics of the Narendra Modi government who think that some parts of the new laws are good for farmers in the long run; there are partisans of the Bharatiya Janata Party who think that the government didn’t consult enough before putting the bills to vote; there are others who think these laws are a stratagem to sell Indian agriculture, cheap, to the prime minister’s capitalist cronies and yet others who think that the mandis and minimum support prices merely coddle a class of rich kulaks. There is no forum in which these views are coherently exchanged.

That forum can’t be a newspaper, however open it might be to differing political views. Print as a medium is less accessible and, in a country like India, less democratic than the radio. Because people can listen to the radio while doing something else, it is the perfect medium for the mythical public square where citizens talk out their concerns. It can’t be done on television; it has to be aural so that people can be possessed while not paying attention.

The BBC is the world’s largest argument for centrism. Publicly mandated to talk out everything in a rhetorically even-handed way, the BBC’s real charter is to sustain mainstream chat that keeps people centered. The BBC is a national conversation and everyone listens in occasionally if only because they pay the licence fee. They overhear arguments about the potential of Brexit, the dangers of vaccination and the prospect of Scotland seceding. First-rate public broadcasting normalizes disagreement. It is not just the medium, it is the mandate. American shock-jock stations demonstrate that it is perfectly possible to be toxic on the radio.

During the last British general election, Jeremy Corbyn’s supporters were convinced (with some reason) that the BBC’s political editor, Laura Kuenssberg, was prejudiced against their man. After the election, the BBC’s director-general might have pointed to the Conservative government’s determination to undermine the licence fee as evidence of the BBC’s even-handedness. The bland two-side-ism that so agitates sincere partisans is a necessary formula for broadcasting sanity. It is like a tanpura drone that tells the listener that there is some baseline of truth on which variations are being played. When the drone disappears, all you have is noise, like American talk radio or Indian jock television.

The idea that there is an agreed-on common sense that ought to constrain angry rhetoric seems, in good times, like willed blandness; in bad times, like the present moment, the reality of a non-partisan public broadcaster paid for by citizens is a rock on which you might build democracy’s church.

This doesn’t mean that a country’s political culture should consist of centrist broadcasters. In England you have papers like The Telegraph, The Spectator and the Daily Mail that rage for a no-deal Brexit and Unionism and rage against Black Lives Matter and every other form of ‘wokeness’ without restraint. And they have their counterparts on the Left. But in the run-up to an election, on the eve of a referendum, in the middle of a controversy on trans rights, the twain do meet... in the BBC’s studios to talk civilly about their disagreements. And they do this because they recognize that the BBC is ideologically neutral ground.

It isn’t just journalists and pundits who argue on the BBC; the way public opinion is broadcast, the way the BBC’s hosts canvas public opinion is a lesson in how curiosity and tact can be combined. They flag themes, have people call in, ask their callers potentially provocative questions and yet manage to conduct rolling conversations while steering callers away from bad-tempered ranting.

Think of how All India Radio might have covered the farmer’s protest if Prasar Bharati, India’s ‘autonomous’ broadcasting corporation, had been a neutral broadcaster instead of a neutered one. Between Amit Shah’s dissembling, the Akali Dal’s bid to re-invent itself as a critic of the BJP, Rahul Gandhi desperation to make something of the opportunity, the views of contending economists and the testimony of the farmers dug in for the long haul on Delhi’s borders, we could have had riveting radio.

But that ship has sailed. What we do have, as a long shot alternative, is the prospect of another kind of BBC, a Bespoke Broadcasting Service that we might create by occupying the airwaves, one podcast at a time, till we have a critical mass of independent voices doing what they can to redress a zombie public broadcaster’s failure to do its job.