Advertisement
Home / Opinion / Self before nation

POLITICS AND PLAY: The arrogance of power and the humility of patriotism 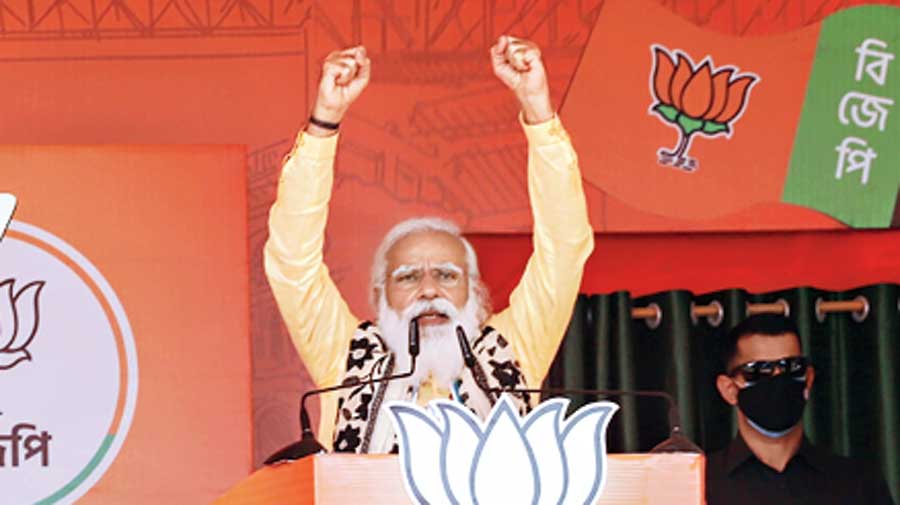 In April 2020 — exactly a year ago — I published an essay in the Hindustan Times urging the prime minister to adopt a more consultative approach towards decision-making. “In the wake of the coronavirus pandemic,” I wrote, “the country faces probably its greatest challenge since Partition... This pandemic and its fallout have already led to enormous human suffering, and this will multiply. In this scenario, to restore social trust and to rebuild the economy may be beyond the abilities of one man and his small circle of trusted advisers.”

Having outlined the broader problem, I went on to offer, gratuitously I suppose, a series of specific recommendations. So I said: “The prime minister could do worse than consult former finance ministers who have experience in crisis management, even if they owe allegiance to the Congress. Former finance secretaries and governors of the Reserve Bank of India with relevant expertise could be consulted too. The government could actively reach out to scholars... who understand the vulnerabilities of farmers and labourers far better than the economists currently in North Block. And they should consider bringing on board outstanding former health secretaries who, working with the medical fraternity, had helped contain the AIDS crisis, see off the H1N1 scare, and eradicate polio in India.” (https://www.hindustantimes.com/columns/shed-partisanship-reach-out-to-the-best-minds-writes-ramachandra-guha/story-Gl9QENGFmNA2Uc8YB9wtOM.html)

In writing as I did, I was, as Dr Johnson might have said, placing my faith in Hope over Experience. For in his tenure as prime minister, Narendra Modi had already made visible his contempt for experts, this contempt demonstrated both in theory — as in the remark that he believed in ‘hard work, not Harvard’ — and in practice, as in his going ahead with the catastrophic experiment with demonetization even when the top economists in his own administration had warned against it. He had also shown an unremitting hostility towards politicians of other parties, treating them — again, in word and in deed — with arrogant condescension.

In the year since my piece was published, these two character traits have been much in evidence, and so also a third — the desire to build one’s personal brand further and ever further. Two actions in the past few months demonstrate the extraordinary extent of the prime minister’s vanity. These are his decision to emblazon his photograph on every vaccination certification issued, and his consent to having the country’s largest cricket stadium being rechristened the Narendra Modi Stadium, thereby joining the ranks of Mussolini, Hitler, Stalin, Gaddafi and Saddam as someone who has had a sports arena named for himself in his own lifetime.

In an earlier column, I wrote that the idea to rename the Sardar Patel stadium in Ahmedabad after Narendra Modi most likely “came from a Gujarati politician with a strong familial interest in Indian cricket administration, who may have sought both to flatter his boss and silence criticisms of his progeny.” (https://www.telegraphindia.com/opinion/a-prime-minister-and-his-imperial-vanities/cid/1807984) That speculation has been given empirical teeth by an advertisement covering the entire front page of my local newspaper the morning I write this (Thursday, April 22), whereby the chief minister of Karnataka heaps unctuous praise on the prime minister. Dominated by a massive photograph of Modi smiling benignly at the world, the text of the ad conveys the ‘heartfelt thanks from all Bengalureans to Sri Narendra Modi, Honourable Prime Minister of India, for granting approval to Phase-2A & 2B of Namma Metro...’

I later found that the same ad had been issued in English and Hindi newspapers published in New Delhi too (https://www.thenewsminute.com/article/karnataka-govt-publishes-full-page-ads-bengaluru-delhi-newspapers-thanking-pm-147618), presumably because then it would be more likely to be seen directly by its intended audience. The chief minister issuing these ads was seeking both to flatter his boss and silence criticisms of his administration by his own party MLAs, with the chamchagiri being conducted at public expense. Whether ordinary party worker or chief minister of a major state, everyone in the BJP knows the importance of massaging the monumental ego of their Supreme Leader.

When, back in April 2020, I urged the prime minister to get the best minds on board to advise his government, the idealism underlying my proposal stemmed from my professional background. As a historian, I had known of several instances when Indian prime ministers had set aside their partisan prejudices and asked Opposition politicians to help them. These included Jawaharlal Nehru’s request to C. Rajagopalachari to lead a peace delegation to the West in the 1960s, at the height of the Cold War; Indira Gandhi’s request to Jayaprakash Narayan to alert the world to the refugee crisis emanating from the Pakistani army’s crackdown on East Bengal in 1971; and P.V. Narasimha Rao’s request to Atal Bihari Vajpayee to lead a Government of India delegation presenting our case for Kashmir to the United Nations in 1994.

These instances of bipartisanship were all admirable and significant, and there was another precedent that was more admirable and significant still. This was the constitution of a national government at the time of Independence. Knowing the gravity of the situation that faced them, Jawaharlal Nehru and Vallabhbhai Patel reached out to the most able individuals regardless of party affiliation. Although B.R. Ambedkar had been a bitter critic of the Congress for the past 20 years, he was asked to become law minister. Other major ministries were assigned to S.P. Mookerjee and R.K. Shanmukham Chetty, who had also been political opponents of the Congress. In acting as they did, the first prime minister of India and the first home minister of India set aside pride and prejudice and put the needs of the nation above those of their own party. The safeguarding of our hard-won freedom required Nehru and Patel to set aside the arrogance that comes with power and embrace the humility that patriotism mandates instead. And they did.

A year after my plea for bipartisanship was published in the Hindustan Times, its arguments have been echoed in an editorial published earlier this week in The Telegraph. This states: “The scale of the crisis — the nation is at war with a virus — makes it imperative for the Central government to be collaborative in its approach. It is this shared spirit of cooperation that has helped the country stand together during many a crisis in the past — medical, political or economic. It is a pity that the ruling Bharatiya Janata Party refuses to learn useful lessons from this history. Bolstering federalism and a conciliatory approach towards the Opposition, some of whose constituents have vast experience in running the country, should be deemed important in these desperate times.” (https://www.telegraphindia.com/opinion/the-fiddler-pm-playing-to-the-gallery/cid/1813168)

Here are some other Indians, possibly good but certainly naïve, placing their faith in Hope over Experience. It is indeed true that in the past a “shared spirit of cooperation” saw the nation through troubled times. But whether this regime is capable of promoting trust and solidarity between citizens and across party lines is another matter altogether.

In the year that the nation has been at war with the virus, the personality cult of the prime minister has steadily expanded, while the government’s approach towards the Opposition has become ever more confrontational. Indeed, the spite and venom expressed by Union ministers and BJP parliamentarians towards the chief ministers of Maharashtra and Delhi beggar description. Delhi and Mumbai are our largest and most important cities. One is our political capital, the other is our financial capital. Each is home to tens of millions of Indians. What kind of deshbhakt would want the residents of these cities to suffer merely because they are ruled by parties other than the BJP?

If this sort of partisanship were confined to the BJP’s troll army, it would not be so worrying. Tragically, however, it is practised by the most powerful people in the Union government. In the year since the pandemic began, the actions and travel schedule of the home minister of India both strongly suggest that his top priorities are: (a) bringing his party to power in West Bengal; (b) bringing his party back to power in Maharashtra. Neither is at all within the subjects assigned to his ministerial portfolio, yet it seems that they matter more to him than those subjects that are.

Meanwhile, the prime minister’s own sense of what he thinks is important is best demonstrated by a statement he made while campaigning in Asansol on April 17, 2021. “Maine aisi sabha pehli baar dekhi hai (I have never seen such big crowds at a rally),” he boasted (see https://twitter.com/ndtv/status/1383419909128933377). Sure, and we have never seen such insensitivity and callousness from an Indian politician either. By April 17, the second wave of the pandemic had already begun to hit us hard. The hospitals were filling up and so were the cremation grounds, and here was our prime minister bragging in public: ‘See how many people have come to hear me speak!’

The pandemic and its successive waves have come on the back of a flailing economy and a fragile social fabric. This may indeed be the gravest crisis the nation has faced since Partition. More than ever before, we need a government that learns to listen, that listens to learn, that can bring itself to act in the interests not of one party or one religion, and most emphatically not in the interests of one Leader alone. On when, and whether, we can get such a government the future of the Republic may rest.

The fiddler: PM playing to the gallery