Either you control Corona or move out, TMC chief tells Prime Minister 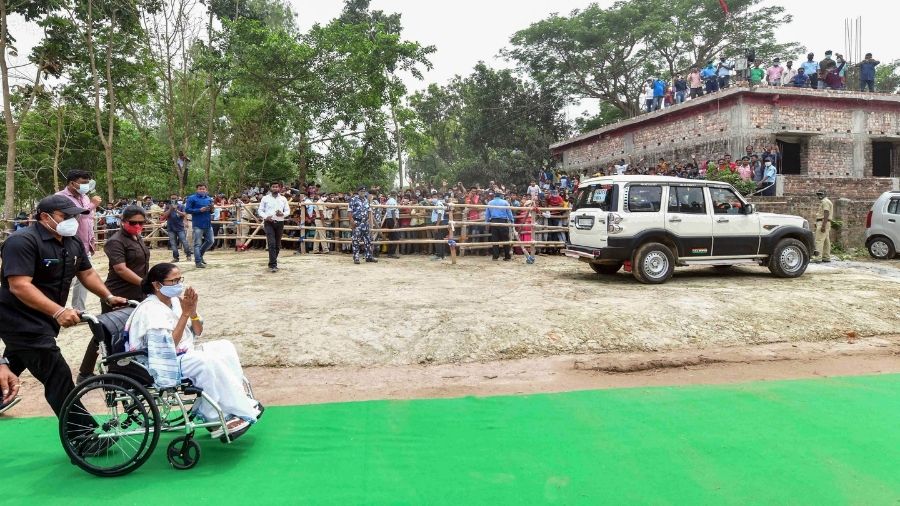 Bengal Chief Minister Mamata Banerjee Wednesday sharpened her attack against the prime minister over resurgence of Covid-19 in the country calling it "Modi-made disaster" and demanded that he quit if he cannot provide adequate medicine to fight the disease.

She alleged that 65 per cent of the drugs manufactured in the country for tackling the pandemic have been exported.

"The Covid-19 pandemic had subsided in the country but has made a resurgence owing to the monumental failure of the central government and negligence and total incompetence on its part," she said addressing public meetings at Chanchal in Malda and at Harirampur in Dakshin Dinajpur districts.

As the Election Commission did not accede to Trinamool Congress' request to hold the last three of the eight-phase election in Bengal on a single day, Mamata said she is having to take care of the sharp rise in the pandemic in the state as its chief minister as well as the election campaign for Trinamool Congress, her party.

Hitting out at Prime Minister Narendra Modi, Mamata said "The country is facing a Modi-made disaster. Modi Babu will have to take responsibility for why medicines to treat Covid-19 are not available in the market ... You have to provide medicines or leave the seat. Either you control Corona or move out."

She alleged that 65 per cent of drugs manufactured in the country to treat coronavirus have been exported. Medicines may be given to other countries, but it has to be also ensured that people of the country get adequate supply.

BJP is attempting to break the spine of Bengal and "we (TMC) have also resolved to break its backbone," the feisty TMC supremo said and claimed that none else has the power to fight against Narendra Modi other than her.

"Bengal is the land of Royal Bengal Tiger and we fight like one," Mamata said.

The chief minister claimed that her government has done a lot for the welfare of Rajbanshis and the minorities in the state.

"We have done everything - the only task left to be done is to drive out the BJP," she said and assured that she will not allow implementation of National Register of Citizens or the National Population Register in Bengal.

Mamata urged the people "not to allow division of votes" and to unitedly support the TMC.

She said if TMC is re-elected for the third consecutive term, her government will arrange soft loans of up to Rs 10 lakh for higher education so that the deserving students can establish themselves in different fields across the country and the world and return to Bengal.

Addressing a gathering in the Muslim-dominated Malda district, which is considered a Congress bastion, Mamata asked the electorate to cast their votes in favour of TMC irrespective of their religious beliefs as it is the "only party party which has not allowed any division on the grounds of religion.

There is "no one else in the market" to ensure a government which will protect the religion and rights of all the people but the TMC, Mamata said and urged people not to divide the votes against BJP by supporting the Congress or the Left Front.