POLITICS AND PLAY | A prime minister and his imperial vanities 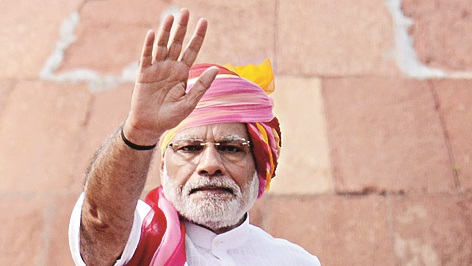 There was once a king named Narendra. He ruled over a large kingdom, home to (among other things) the holiest shrine of the Hindu faith. Because of his lineage and as the patron of this great temple he was regarded by his subjects as divinity personified. However, despite the hallowed place accorded to him by virtue of his hereditary position, the king was dissatisfied. He wished to decisively set himself apart from the men who had occupied this particular throne before him, and who might occupy the throne after him. So our vain king built for himself and his subjects a brand new capital altogether. He called it Narendranagar.

The story I have told above is neither mythical nor ancient. It is true, and the events I have narrated occurred merely a century ago. This king was Narendra Shah of Tehri Garhwal state, whose family controlled the Badrinath temple. The construction of the new capital named after himself was completed in 1919.

As a boy growing up in the Garhwal foothills, I often visited Narendranagar myself. Memories of the place, and the story of its origins, came back to me when I heard that a major cricket stadium in Ahmedabad had been named for Narendra Modi. The full details of how this name was chosen will probably never be disclosed to the public. A British newspaper has run a story with the headline, “Narendra Modi renames cricket stadium after himself”. It seems more likely that the idea originally came from a Gujarati politician with a strong familial interest in Indian cricket administration, who may have sought both to flatter his boss and silence criticisms of his progeny. Either way, for a serving prime minister of a so-called democracy to allow, encourage or initiate this renaming was a staggering act of vanity, matched only (as the Twitterati was quick to point out) by Adolf Hitler, who allowed, encouraged, or initiated the naming of a football stadium after himself in Stuttgart in the 1930s.  Further digging by a writer in The Wire revealed that Hitler’s fellow dictators, Benito Mussolini, Saddam Hussein and Kim Il-sung, also had stadia named after themselves when in power.

All politicians have a high opinion of themselves. The profession demands it. However, in a republic, politicians must learn the importance of democratic procedure, and never allow themselves to become bigger than the office they hold. While a king may equate himself with his kingdom, a democratically elected prime minister (or president) should never think of himself or herself as synonymous with the country. Alas, this lesson has not always been heeded by leaders of the world’s oldest republics. Equating himself with France came naturally to President Charles de Gaulle. The American historian, Arthur Schlesinger Jr, coined the term, ‘imperial presidency’, to characterize those leaders of his own country who ruled more like monarchs and less like democratic politicians mindful of checks and balances.

There have been three imperious prime ministers in the history of our own republic. These are Jawaharlal Nehru, Indira Gandhi and Narendra Modi. All have towered above their colleagues in party and government. Both Nehru and Indira were awarded the country’s highest honour, the Bharat Ratna, while still in office. Could this be what Modi does next? It was intriguing, as well as a little surprising, that it was President Ram Nath Kovind who was the chief guest at the ceremony when the Sardar Patel Cricket Stadium was renamed after Narendra Modi. Could this be the prelude to Kovind awarding Modi the Bharat Ratna in 2022 or 2023?

I think this unlikely, for two reasons. First, Modi has sought systematically to distance himself from his predecessors, and he will do so in this regard as well. Second, he has larger ambitions for himself. Nehru and Indira allowed or encouraged the awarding of a republican honour to themselves. Modi, however, will do something much more spectacular. He will, through an expensive exercise in monumental architecture, reshape India’s capital itself.

Readers will recall that, in June 2014, shortly after he was sworn in as prime minister, Narendra Modi said in the Lok Sabha that his aim was to undo twelve hundred years of slavery (bara sau saal ki ghulami). At the time, a young writer told me that this statement, and the speech as a whole, was deeply revealing of Modi’s political and personal ambitions. Hindus, thought Modi, had for too long been subservient to or ruled by foreigners. He had now arrived to give them back their self-respect and their dignity. By framing the issue as he had, said my friend, Modi was suggesting that he was the first Hindu ruler to successfully unite the country. For all their bravery, for all the folklore about them, Shivaji and Prithviraj had succeeded only in having a small sliver of the subcontinent under their control. In territorial or political terms, they had not been remotely as successful as (the Buddhist) Ashoka or the (Muslim) Mughals or the (Christian) British. Prime Minister Modi would finally redeem the Hindus by accomplishing what Shivaji and Prithviraj had failed to do.

To announce their significance, to proclaim their superiority and assert their sovereignty, kings often construct new capitals for themselves. When Narendra Shah built a new capital in Garhwal he was following in the footsteps of many kings in India and abroad. Indeed, a few years before he decided to build Narendranagar, the emperor to whom Narendra Shah himself owed allegiance, King George V of England, announced that British India deserved a new capital. The old seat of government, Calcutta, would not do anymore. The centre of imperial power in the subcontinent would henceforth shift north. On land acquired from villages to the south of the old city of Delhi, the British imperialists constructed a grand new city befitting their own elevated sense of self.

Around three centuries before the British Empire decided to shift its capital, the Mughal Empire did likewise. Shah Jahan, the fifth ruler of a dynasty begun by Babar, chose to move his kingdom’s capital from Agra to Delhi. He supervised the construction of a series of gorgeous buildings, many of which still stand. Once everything was in place, and he was satisfied with what he saw, he named the city after himself. It was to be called Shahjahanabad.

In The King and the People, his brilliant new history of 17th and 18th-century Delhi, Abhishek Kaicker writes that, of all the Mughal emperors, Shah Jahan was “the most voluble of all in enunciating the discourse of sovereignty in architecture”. Shah Jahan took especial “pains to ensure that his figure appeared before his subjects as an otherworldly, angelic being: when the emperor appeared below the gilded arched roof of his palace windows, the light of the morning sun enveloped his figure in the same sort of golden shimmering halo which enveloped his image in portraits”.

Like Shah Jahan, Narendra Modi pays an extraordinary amount of attention to his dress and personal visage. His clothes, his posture, the background against which photographs are taken are all meticulously attuned to the occasion at hand. And he is luckier than Shah Jahan in the technology at his command. A medieval emperor had to appear in person to make a dramatic impact; whereas a postmodern autocrat can use radio, television, newspapers, websites, WhatsApp, Instagram and so on to present the image he desires to every Indian alive.

Narendra Modi’s behaviour as prime minister has been imperious, as manifest in his treatment of political colleagues and political rivals, in how he presents himself in public, in his disregard for debate in Parliament, and in his refusal (whether born of contempt or cowardice) to hold even a single press conference. Like the emperors of yore, his publications are all one-way, Mann ki Baat being a 21st-century equivalent of the Mughal firman. Like them again, he seeks to perpetuate himself through an architectural reshaping of the very centre of political power. A mere cricket stadium in Ahmedabad or even a Bharat Ratna certainly will not do.

It is ironic that, for all his denunciations of British and Mughal rule, Narendra Modi seeks to make his most permanent legacy a crass imitation of what the British and the Mughals did for Delhi. It may be his hope that, three or four hundred years later, future subjects of the Hindutva rashtra will look with pride at his buildings but with derision at what previous emperors had built before him. That hope is unlikely to be realized. For, from what one knows of the chosen architect and his past constructions, it is unlikely that this new exercise in imperial hubris shall yield a single building remotely as beautiful as the Lal Qila or the Jama Masjid, the North or the South Blocks.

A final thought. The scheme to reshape New Delhi is currently called the ‘Central Vista Project’. Once the new complex of monumental buildings has come up, however, surely that colonial appellation must give way to an atmanirbhar replacement. ‘Narendranagar’ has already been taken, by a vain king of that name who ruled over a hill kingdom a century ago. Perhaps ‘Narendra Mahanagar’ then? Or even ‘Modiabad’?