If the government can’t establish the writ of the State, it should just step aside and ask religious extremists to take over 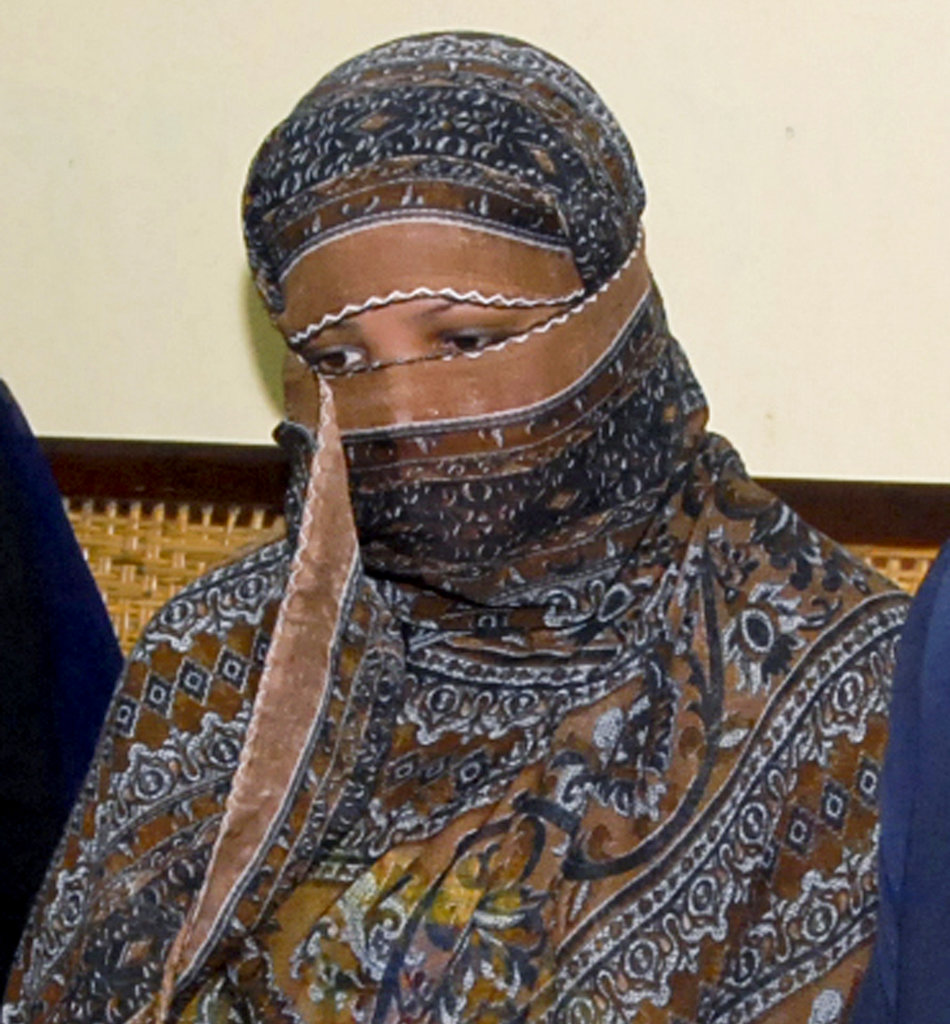 File photo (2010) of Asia Bibi, a Pakistani Christian woman, at a prison in Sheikhupura near Lahore. She was acquitted recently after nearly a decade in prison for blasphemy
AP Photo
Mehmal Sarfraz   |     |   Published 07.11.18, 04:41 AM

I can’t believe what I am hearing, will I go out now? Will they let me out, really?” These were the words spoken by Asia Bibi when AFP called her in prison after a landmark verdict on October 31, 2018. After almost a decade in jail, Asia Bibi was finally free.

In 2009, she was accused of committing blasphemy. In 2010, a death sentence was handed out to her by a lower court. In 2014, the Lahore High Court upheld the verdict. A three-judge bench headed by the chief justice, Saqib Nisar, heard Asia Bibi’s final appeal. She was released after it was proved that the allegations against her had been fabricated and she never committed blasphemy in the first place. “The appeal is allowed. She has been acquitted. The judgement of high court as well as trial court is reversed. Her conviction is set aside,” said Nisar.

When the verdict was announced, I couldn’t stop crying because this poor Christian woman had been incarcerated for nine years only because someone had lied. Salmaan Taseer, the governor of Punjab, was assassinated in January 2011 for saying that Asia was innocent and that the blasphemy allegations against her should be probed thoroughly. Taseer’s killer was garlanded for murdering him. A couple of months later, the federal minister for minorities, Shahbaz Bhatti, was also assassinated for defending Asia Bibi. Two people lost their lives while she lost several years of her life due to false allegations.

All hell broke loose after this verdict by the Supreme Court. A call of protest was given by the leadership of the Tehreek-e-Labbaik Pakistan against the verdict. Violent protests erupted all over the country. All major cities, including Lahore, Karachi and Islamabad, came to a standstill in the aftermath of these violent protests.

As if the protests weren’t enough, the TLP leadership targeted the three Supreme Court judges in their speeches, inciting violence against them by suggesting that their cooks, drivers or bodyguards should ‘take care’ of them as they ‘deserve to be killed’. Even the army chief was not spared. He was labelled an Ahmadi and a non-Muslim by the TLP leader, Pir Afzal Qadri, who asked the “Muslim generals” in the army to lead a mutiny against him. Qadri also asked for the ouster of Imran Khan and his government.

Qadri’s inflammatory speech was not aired by any television channel but it was all over the social media. The prime minister, Imran Khan, decided to address the nation the same day. It was a short speech with a strong message. He mentioned Qadri’s speech threatening the top judiciary as well as asking for a mutiny in the army. Khan said these elements were inciting people for their own political gain in the name of religion and were not doing any service to Islam. At the end of the speech, he warned these elements that if they challenged the writ of the State, the State would deal with them.

After Khan’s speech, even his critics lauded him for delivering a hard-hitting message to miscreants. People now expected the State to launch a crackdown on the TLP leadership and the protesters. Nothing happened. Khan left for China. The country went up in flames on account of protests. No arrests were made. On Friday night, an agreement was signed between the government and the TLP. One of the conditions was that a review petition would be filed against the Asia Bibi verdict by Islamists and the government would not challenge it. But the more alarming condition was that Asia Bibi would be put on the Exit Control List. The State capitulated — once again.

State capitulation in front of religious extremists is nothing new. It has happened many a time in the past. What was disappointing was that the prime minister’s speech gave a lot of hope to the people that for a change, a government is willing to take a stand against these goons. Many said that if the State was going to sign yet another surrender document, the prime minister should have kept quiet instead of giving a fiery speech. Others say it wasn’t the prime minister’s fault when the all-powerful military refused to step up in spite of the fact that the army chief was targeted in the speeches. But it doesn’t matter who is at fault here. What matters is the message that this has given to the religious extremists: they can get away with anything — even speeches that fall under the purview of sedition.

In a country where bloggers, journalists and other civilians can be picked up, threatened and/or even killed for raising their voice against the military establishment, religious extremists like Khadim Rizvi and Pir Afzal Qadri are roaming free, inciting violence against the higher judiciary as well as the military top brass. The rules are different for the TLP from the others. This is the same country in which two former prime ministers, Nawaz Sharif and Shahid Khaqan Abbasi, are facing treason charges for a newspaper interview. The journalist (Cyril Almeida) who interviewed Sharif has been charged in the same case for doing his job.

One could see the frustration of some federal ministers at the way things were going. The federal human rights minister, Shireen Mazari, tweeted: “Appeasement to ‘avoid bloodshed’ sends a dangerous msg to non-state actors & undermines the very concept of democratic peaceful protest. The State has to enforce Rule of Law, Constitution & stand by state institutions esp when they are targeted. #IStandWithSupremeCourt.”

The federal information minister, Fawad Chaudhry, joked that these religious extremists should be sent to space and left there. Chaudhry is one of the few brave people in the Pakistan Tehreek-e-Insaf government who have consistently taken a stand against religious extremism.

Some arrests were made after identifying those who vandalized or damaged property after the agreement between the TLP and the government was signed. This isn’t enough. Until and unless the TLP leadership is arrested, it would be very difficult to establish the writ of the State. By not arresting them or taking them to task over the language used in their speeches, the State is sending a message of defeat, cowardice and capitulation. If the government can’t establish the writ of the State, it should just step aside and ask Khadim Rizvi or Afzal Qadri to take over.