Our self-made traps of whataboutery 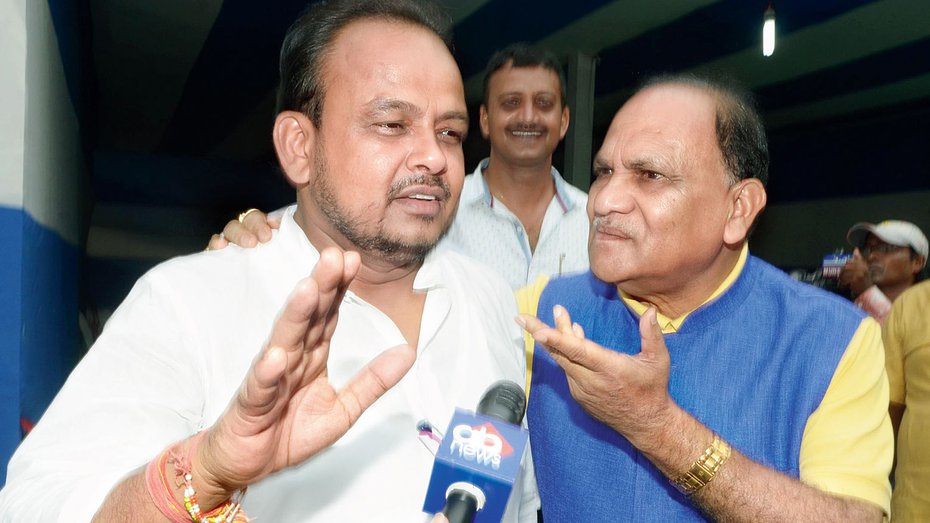 BJP leader C.P. Singh (right) asks Congress MLA Irfan Ansari to chant ‘Jai Shri Ram’ on July 24, 2019. A letter protesting the imposition of the slogan was portrayed in a subsequent letter as “a disguised attempt to pour disdain on the subalterns for whom faith and worship are defining dimensions”
Picture by Prashant Mitra
Bhaswati Chakravorty   |   Published 01.08.19, 03:56 AM

Chatting with a friend, I was suddenly shaken. My friend said something positive. Referring to the first of the two most recent open letters to the prime minister, she mentioned one of the best-known signatories, saying that it was good that the lady was making a point of protesting publicly against anything she felt was wrong or unjust, whether in the state or at the national level, irrespective of the political leader in question. I agreed, but before I knew it, had also added: but that is the position of another party, more visible now among its adherents in various cultural fields than in the political arena.

That shook me. I had unthinkingly merged a citizens’ protest and ideological affinities with a particular party, and in this I had been influenced by frustration and an almost disbelieving sense of betrayal that had nothing to do with the letter-writers. I had admired, rather, some of the signatories’ dignity and steadiness of conviction in the face of the ugliest bullying on television and social media. By my reaction to my friend’s comment, I had not only undermined a considered and forthright position on injustices and distortions around us but by so doing, I had also sided with the perpetrators of some of the greatest wrongs in the country.

The value of an argument put forth by citizens should not be weighed in terms of the inconsistencies of visible or invisible parties. That would strike us dumb. Yet I had smoothly slid into the trap of whataboutery, by which a citizen abdicates his power to think by crying : why this (now) — what about that (then)? We have all laid these traps for ourselves by allowing the competitive politics of power to seep into every thought, perception and expression. It is a poison we have not resisted. It is not possible any more to remark casually, for instance, that city roads are cleaner than before, without being immediately derided by one’s closest acquaintances for ‘supporting’ the politician or the party responsible, since that entity is guilty of, perhaps, destroying education.

Consequently, anything that is said becomes informed with an ulterior motive — the motive to capture, occupy, overwhelm everything from terrains and electoral segments to minds and moralities. That is how the writers of the second letter portrayed the writers of the first. But fairness — if the word can be freed of self-serving intent — demands that both letters be read with an equal effort to understand where the arguments are springing from. For without such understanding we shall not be able to deactivate the traps into which we keep walking.

What is most bewildering is that, in effect, both sets of citizens want the same thing. The first letter begins with the constitutional vision of India as a secular socialist democratic republic where citizens of all religions, ethnicities, gender and castes are equal. The second letter underlines India’s freedom, unity and integrity and emphasizes the prime minister’s aim of governing on the foundations of positive nationalism and humanism. None of these concepts was ever free of historical loads, but now it seems that their entire connotations have changed, else they could not have been placed so aggressively — one group against the other.

The word ‘freedom’, for example, is used in two ways. Two meanings of freedom would not be new; liberty could mean the freedom to protect sovereignty from external aggression as well as the freedom of speech and belief of individual citizens. Problems of divided meaning emerge when the letters interpret the practice of each sense as a threat to the other, placing them in opposition in an argument that has first conflated the two meanings. The second letter says: “For the signatories [of the first letter], it seems the freedom, unity and integrity of India can be bartered away in the name of freedom of speech and expression.” Imagining liberty without freedom of speech is like an oxymoron in thought, as Milton’s “darkness visible” is an oxymoron in language. Therefore the protest against violent mob killings of minorities and poor people in the first letter, given with extensive data, can only be seen as an illegitimate use of the freedom of speech in creating what the second letter calls “selective outrage and false narrative”. The prime minister has condemned this “social malady”, so “persons with a social and public profile ought to generate greater awareness on the need to tackle and eliminate the mind-set that leads to lynching”. The State is absolved of responsibility while citizens are expected to treat the perpetrators like compliant children.

By the same line of argument, the first letter’s assertion of a citizen’s right to dissent or criticize the government without being labelled anti-national becomes, in the second letter, a motivated effort to disregard the environment of “liberty to differ” that is felt most strongly under this prime minister. Many of the earlier “group” of writers, it is claimed, have a record of acting as mouthpieces of insurgents in the past (I put this briefly), and “[t]o disguise the propensity for subversion by the name of dissent is a dangerous trait”.

Thus dissent acquires a new connotation in the second letter — with a little help from an unspecified ‘what then’ past. ‘Integrity’ of the country, then, is that condition in which dissent means subversion, and ‘unity’ the overall agreement on the presence of the “liberty to differ”. When did the same words begin to mean such wildly differing things? Conflict — between classes, castes, regions, religions, languages, ethnicities — has always been part of India’s experience of democracy. Neither is disagreement, bloodshed, rioting or extremism new. But the meanings of generally used words have never been so conflicted before.

So, is it the elephant in the room? Religion, too, has always been part of politics in India, appearing to be ‘in touch’ with politics ordinarily and at the forefront in times of sectarian violence. And nationalism, the progenitor of notions of ‘unity’ and ‘integrity’, seemed to have been taken for granted in large parts of the country except in crises as that of 26/11, although constantly ‘on edge’ in border states experiencing militancy. Has the combination of muscular religion and conscious nationalism driven this wedge through language? The combination has obviously found a far deeper and wider echo among Indians than the writers of the first letter and those who agree with their point of view were aware of.

This unawareness has been dangerous. The reference in the first letter to “Jai Shri Ram” becoming a war cry, in this context, allows a slip. Whatever the situation today, it is the greater question of freedom that is at stake here. No slogan, of whichever religion or political party, can be forced on anybody, and no one can be tortured or killed for refusing to utter it. Or for uttering it either. Words with two faces easily turn logic on its head. The protest against the aggressive application of this slogan is thus portrayed in the second letter as “a disguised attempt to pour disdain on the subalterns for whom faith and worship are defining dimensions”.

There is much to learn from the second letter, especially if there is to be an effort to remove the traps we have laid for ourselves and find some ground to retrieve language from its starkest divisions. Meanwhile, those ignorant of the “liberty to differ” have asked why an open letter of protest to the prime minister, public and above board, needed a counter-letter intended to destroy the credibility of the first set of authors, including a list of instances of violence and injustice — many from West Bengal (coincidence surely) — in which they were silent. Like words and logic, narrative, too, is now completely divided.

What this is about and not about