Two Calcutta boys, so to speak. Two Anglophiles, so to speak. Two scions of the same hallowed alma mater called St. Stephens who had flown separate ways and come to land on opposite ends of the stage on Saturday evening: Shashi Tharoor and Swapan Dasgupta, one every inch the smiling assassin, the other a practised provocateur. 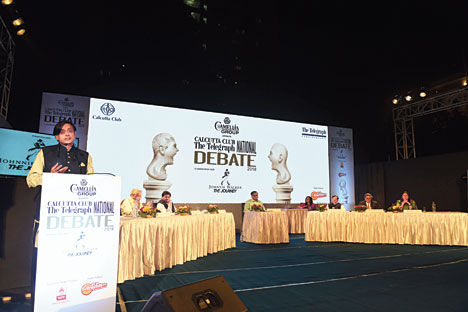 Calcutta: Two Calcutta boys, so to speak. Two Anglophiles, so to speak. Two scions of the same hallowed alma mater called St. Stephens who had flown separate ways and come to land on opposite ends of the stage on Saturday evening: Shashi Tharoor and Swapan Dasgupta, one every inch the smiling assassin, the other a practised provocateur.

They came scripted to joust; you just had to wait for the moment. They'd sized each other up early - that's to be my man and meal - and seamlessly masqueraded their way to pole position, final speakers for and against the motion which read: "In the opinion of the House, in New India, the pillars of democracy are in crisis."

There was only one way The Camellia Group presents Calcutta Club The Telegraph National Debate 2018 was headed from the very start - a Tharoor-Dasgupta duel. The rest, no offence meant, were the lead-in cast: Patidar protagonist Hardik Patel and retired civil servant Ardhendu Sen on Tharoor's flanks, and Meenakshi Lekhi and Tarun Vijay on Dasgupta's.

Tharoor let out the war cry right upfront with a booming " Mitron!" as his sardonic opening to the packed Calcutta Club audience. Thereon, he proceeded to blister the Narendra Modi dispensation as a regime where "petty bigotry passes for ruling ideology" and warned that if things proceeded as they were, it would become a "bitter pillar to swallow".

Tharoor argued, persuasively, that mere rhetoric on democracy wasn't quite enough; evidence from the ground told a different story. "We are a nation of rising intolerance and narrow-minded majoritarianism where the government optimises and capitalises on our worst instincts.... Dissent is seen as sedition, protest is seen as anti-national, media houses are under pressure, their stories are vanishing from websites.... The nation only wants to know what sins the Opposition is committing. Frankly, this new India has messed up old India."

Come his turn at the lectern, Dasgupta cleverly picked on Tharoor's phrase and used it to land sardonic counter-blows.

"Oh, this new India is indeed not a good thing," Dasgupta said, ringing with sarcasm, "because Tharoor and his like have lost their comforts. Shashi is missing old India dearly because in old India you had the assurance of only one family ruling, no scope for anyone else. The rich man was in the castle and the poor man was at the gates.... New India is terrible because the monopoly of the Left-liberals has been destroyed, it has made people realise there is another narrative, it is not a crime to say you are a Hindu...."

Thereafter, in a direct jibe at Tharoor's latest book Why I am a Hindu, Dasgupta chortled: "New India has also made people realise why they are Hindus. What a terrible thing this new India is!"

Tharoor had earlier proclaimed himself a Hindu and a vegetarian, and proceeded to attack his opposition saying: "But there is nothing in my faith to suggest that another person should be lynched for what they choose to eat. Mob-lynching has now become a part of our political lexicon, we are now looking at a country where everybody claims the right to be offended, we had an entire section of the country held to ransom with the farcical drama over Padmaavat...."

" Padmaavat?" Dasgupta wondered aloud, theatrically aghast. "I will tell you who the Padmaavat drama helped. I agree with Shashi it was silly, but who benefited? Come to Rajasthan and I will show you. Every Karni Sena member was campaigning for the Congress because they said the BJP didn't help them."

But Tharoor would have none of that. The BJP used history, he said, as a "weapon of mass distraction"; whenever the BJP had no argument, it took the argument back in time.

And of Dasgupta's ribbing on one-family rule in old India, Tharoor said: "We at least have a family, all you have is one name, Om Namo Namah!"

The duelling could have gone on without end. But there is a thing called time and, in such debates, a time-honoured tradition of concluding arguments by putting the motion to vote.

With both sides holding on dearly to that pillar called democracy, unwilling to let go of their pre-eminent part in keeping it preserved, it was probably no surprise that the vote didn't visibly swing either way and chairman Sandip Chatterjee had to pronounce it a dead heat. The pillar, however shaky, had stood.