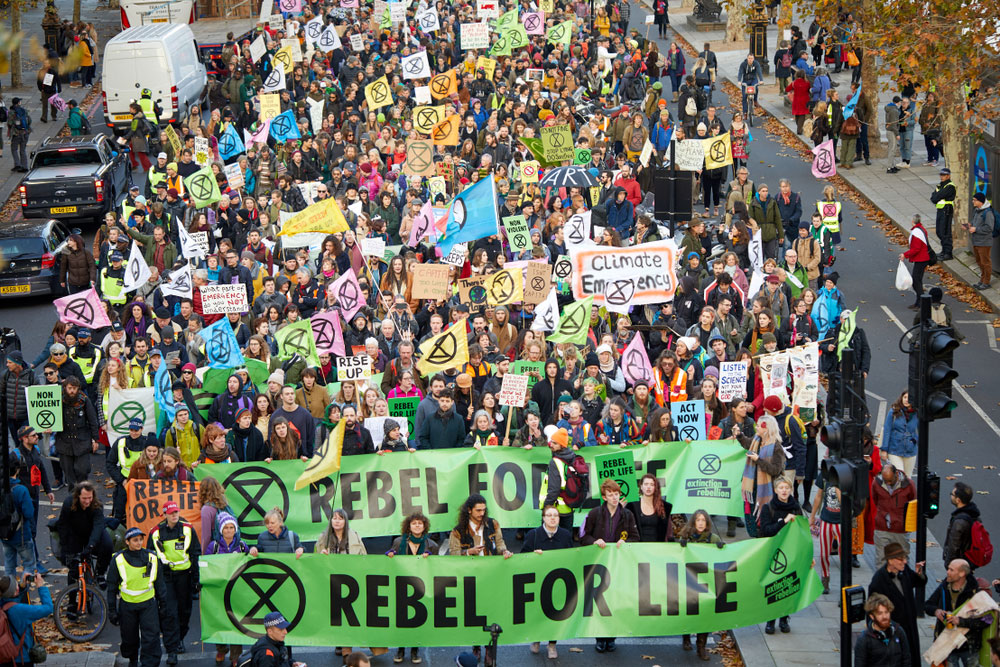 Starting from Western Europe, in Britain, for instance, the Extinction Rebellion took the reins by declaring a week-long mass blockade in major cities worldwide to register its concerns for the planet
(Shutterstock)
Swati Prabhu   |     |   Published 03.10.19, 06:22 PM

Stock-taking of the implementation of sustainable development goals might seem like an uphill task. Surprisingly, it is not. Four years have passed by since the adoption of the United Nations’ sustainable development goals but the ‘charm offensive’ of the international community has turned out to be hogwash. The contribution of most of the business enterprises towards absorbing sustainability in their agenda remains patchy. Although the role of sub-State and non-State actors has been aptly recognized and highlighted in the global climate change narrative, most of the nations, including those in the European Union, continue to be in a phase of “reflection”, and have thus failed to come up with a concrete plan of implementing SDGs.

Basically, a lot has been said and not much has been done. The anthropocentric approach towards the natural environment has, in fact, done more damage than good. This is where one observes the shift towards civil disobedience in climate change mitigation. Recently, the world has witnessed a groundswell of grassroots protests with the primary concern of environmental protection. Interestingly, these protests are not helmed by NGOs or organizations run by large multinational corporations. These are citizen-centred movements operating through social media or the internet, attempting to encourage ordinary people, especially children and the youth, to raise their voices against the loss of biodiversity and the massacre of the environment.

Starting from Western Europe, in Britain, for instance, the Extinction Rebellion took the reins by declaring a week-long mass blockade in major cities worldwide to register its concerns for the planet. Its core belief of civil disobedience is brought out vociferously in its actions by drawing inspiration from both the West and the East — for example, the Indian freedom struggle or the civil rights movement in the United States of America. Another group, hailing from France — Les Désobéissants or The Disobedient Ones — talks about climate emergency through their non-violent methods. Closer home, XR also has an Indian division, XR India, which was formed out of the activism of a Delhi-based environmental campaigner. Opposed to the traditional NGOs, these groups are mostly people’s movements aiming to avert climatic breakdown and minimize the risk of human extinction. Eco-Needs Foundation is another entity which mobilizes young people towards bringing about an ‘eco-revolution’.

However, the Indian government has displayed its endeavour towards localizing the SDGs with the help of the ‘whole-of-government’ approach. This includes local governments. The former has also stressed on aligning the local plan of the states and the Union territories with the larger SDG scheme. Even though the government has not officially spoken about these movements, they do not seem to be complaining. Although still at a nascent stage, these mass movements have the potential to aid governmental protocols of environmental protection in the long run.

The global community today undoubtedly stands at a crossroads between balancing climate change mitigation and human security. The UN Climate Action Summit 2019 and the Global Sustainable Development Report 2019 have once again set the ball rolling among nations to scurry to meet the SDGs within the target year, 2030.

Nagaland gets 0 in some areas, leads in others