In his poetic flight, the prime minister may not have noticed the oddness of his metaphor 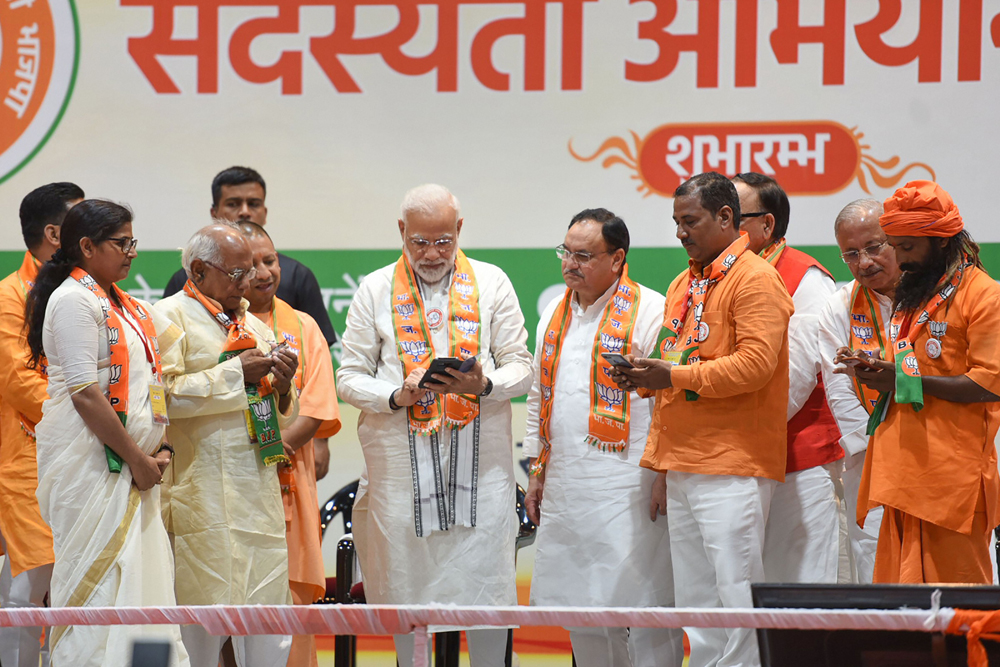 Prime Minister Narendra Modi with BJP leaders at the launch of the membership drive in Varanasi on July 6. Modi dismissed critics of his government’s target of a five-trillion-dollar economy in five years as “professional pessimists”
(PTI photo)
The Editorial Board   |     |   Published 12.07.19, 10:44 AM

One of the greatest gifts of the prime minister of India is his eloquence before an audience. It was only to be expected, therefore, that the day after the Union budget had been presented, Narendra Modi would be at his upbeat, rhetorical best in his own Lok Sabha constituency, Varanasi, at the membership drive held there. Dismissing critics of his government’s target of a five-trillion-dollar economy in five years as “professional pessimists” — those who produce a crisis out of a solution rather than a solution for a crisis like ordinary people — Mr Modi represented the reasons behind his target as quite unique, as though it were the target by itself and not the routes to it that were being questioned. Seizing upon the well-worn “English” saying that the size of the cake matters, Mr Modi declaimed with an air of new minted freshness that the larger the cake the larger the portions for everyone. He laid out the exciting ways in which the cake would be enlarged, assuring all and sundry that not only was the target achievable, but the roadmap for it had also been presented in the budget. All it needed now was the united effort of all Indians to move towards the goal, for the country was ready to sprint.

Communicating the dream demanded lyricism, and Mr Modi recited Hindi couplets about hurdles inspiring attempts to surmount them. As his originality blossomed, he projected an image of the rich and the poor as the two arms of the country, presumably working together to acquire the five-trillion-dollar economy. In his poetic flight, the prime minister may not have noticed the oddness of presenting rich and poor as two irreconcilable ‘arms’ immediately after a budget that is expected to help the underprivileged — surely that would make the body one-armed? But it would be unfair to the government’s repeatedly vocalized concern for the disadvantaged to suggest that the rich and the poor are two distinct classes in the prime minister’s mind. It is just that poetic images are double-edged, simultaneously pretty and cutting; they should be employed with caution. After all, it is to allow ‘the poor’ a slice of the cake that it is being imagined as so big. The intention alone matters, not unguarded flights of fancy.

Union Budget: At the bottom of the page lie Nirmala’s deficit secrets