It has been argued, not without reason, that the demolition of the mosque in an orchestrated campaign signified the dismantling of the edifice of constitutionalism 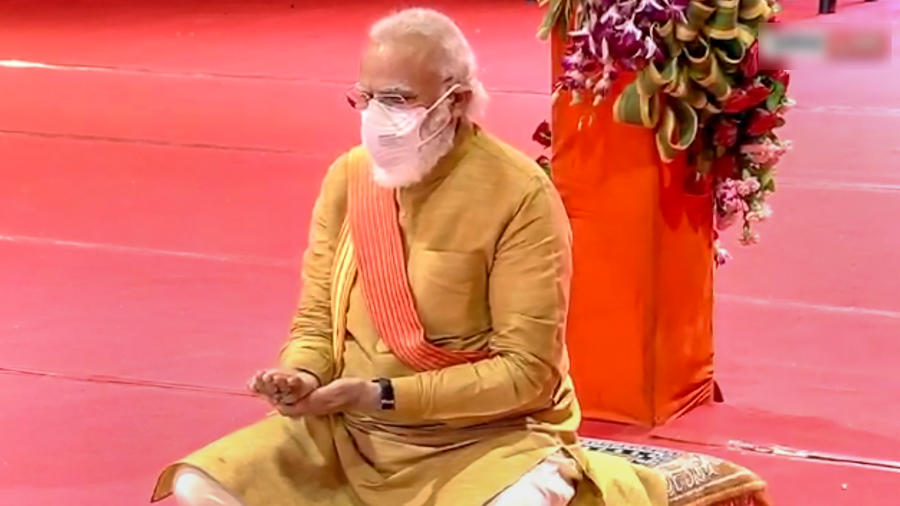 Odious comparisons are par for the course in politics. But some politicians seem more vulnerable to this contagion than others. The Indian prime minister, unfortunately, belongs to the extremely vulnerable category. In his speech during the bhoomi pujan in Ayodhya, Narendra Modi compared — audaciously — the movement to build the Ram temple with that of India’s heroic struggle against the yoke of colonialism. Those with a modicum of knowledge of history — not the version of history that the Bharatiya Janata Party would like to impose on the nation — would take umbrage at Mr Modi’s decision to match the two distinct kinds of mobilization. India’s freedom struggle is a testament to the spirit of inclusion. A nation fragmented on the lines of faith, caste and ethnicity had risen together as one under the leadership of the Mahatma — India’s original unifier — to challenge and then overthrow a mighty empire. A notable blip in this glorious chapter of unity among diverse communities was the Partition, which tore India apart along sectarian lines. These fault lines are visible on the horizon of New India. There is no doubt that the Ram Janmabhoomi movement was a popular phenomenon. But could it envelop every Indian, including all Hindus, in its embrace? A substantial number of Indians have distanced themselves from the movement on account of the toxic rhetoric of Hindutva. While India’s freedom movement served as a glue to keep a polity together, the political campaign that the BJP unleashed in the name of Ram led to division and conflict, elements that are anathema to M.K. Gandhi’s vision of Ram rajya.

It is pertinent to note that Mr Modi stated that the temple construction signified freedom from slavery. It would be interesting to speculate on the implications of this statement. It has been argued, not without reason, that the demolition of the mosque in an orchestrated campaign — the Supreme Court did take note of this desecration in its verdict on the matter — signified the dismantling of the edifice of constitutionalism. Is the ‘slavery’ then symbolic of the collective commitment to the values of pluralism and secularism enshrined in the Constitution? More ominously, is the ‘freedom’ that Mr Modi mentioned suggestive of a clean break with constitutional imperatives? The answer is not clear yet; but it would be in the coming days. What is clear, however, is that Gandhi’s dream of Ram rajya and the one that Mr Modi is working to realize are like the metaphorical chalk and cheese.