Advertisement
Home / Opinion / Much to celebrate

As Americans started slowly moving on from the revelry of the Independence Day of the United States of America, it was time to celebrate the French Independence Day. Millions of people around the world, French and otherwise, celebrate Bastille Day, to commemorate the storming of the Bastille prison during the French Revolution. Last year, President Donald Trump visited Paris for the Bastille Day celebrations, as the day marked a year since a terrorist attack shook the nation and caused the deaths of more than 80 people. 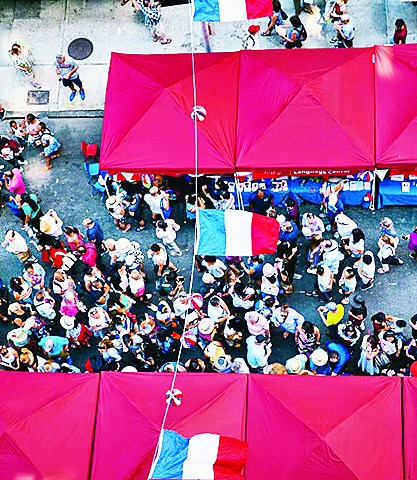 As Americans started slowly moving on from the revelry of the Independence Day of the United States of America, it was time to celebrate the French Independence Day. Millions of people around the world, French and otherwise, celebrate Bastille Day, to commemorate the storming of the Bastille prison during the French Revolution. Last year, President Donald Trump visited Paris for the Bastille Day celebrations, as the day marked a year since a terrorist attack shook the nation and caused the deaths of more than 80 people.

This year, Bastille Day was celebrated one day before the Fifa World Cup final, in which Croatia and France competed for the title. France won, and thus had much to celebrate.

While Paris holds Europe's largest military parade on this day, America also celebrates the French victory. Several French-cuisine restaurants in major cities celebrated Bastille Day and showed the game. In New York, the French Institute Alliance Française, a nonprofit organization promoting the French language and culture in NYC, hosted its annual party on East 60th Street to mark the celebration. In addition to live screenings of the World Cup final, the event included champagne and wine tasting, French food and live musical performances. Fans of Croatia also had their own choice of gatherings at eateries and taverns, many of them in the Queens neighbourhood of Astoria.

Pop-up bars are the cream of summer time. Bars have been working hard to deliver a unique drinking experience to customers. In addition to offering Instagrammable cocktails, they are engaging with pop culture themes to draw the crowds. Last year in Chicago, several individual bars launched pop-ups with popular television shows such as The Simpsons and the Netflix series, Stranger Things, as themes. Pop-ups of this sort allow customers who are fans to bond, connect and even post on social media. All of this boosts business.

In Brooklyn, a group of Mad Hatters has turned the fantasy of Alice In Wonderland into a rather real, boozy, immersive experience. The themed pop-up bar is created on a converted red double-decker bus called The Mad Hatters G&T Party Bus. It is overseen by an international hospitality group planning other New York City pop-ups in the future. Just like the attendees of the tea party in the book rotated around a table, participants will stop at several different stations, make one Victorian alchemy-inspired cocktail at each, with assistance from a Mad Hatter impersonator. More than 8,000 people pre-registered for slots.

However, themed bars can run into trouble too. The Emporium Arcade Bar in Chicago staged a pop-up inspired by Stranger Things. It ran for many weeks, but thoughts of extending it were busted by a cease-and-desist letter from Netflix.

Immigration and visas have been a hot topic ever since Donald Trump's administration took over. Almost everyone knows about the H1B visa, but most do not know that applicants rejected for the visa have a golden opportunity. It is called the EB-5 visa, or the "investor visa". It allows foreign nationals to gain permanent residency in the US for a minimum investment of $5,00,000 in the US economy. Over the last decade, a vast majority of these visas were given to wealthy Chinese nationals. However, India is catching up. Real estate developers and investment firms quickly saw India as the next biggest pool of investors.

The number keeps increasing. There were 307 Indian investors waiting in the EB-5 visa queue by November 2017, according to a US Department of State report. Those are people who submitted their applications but had not gained approval yet. Rogelio Caceres, co-founder of LCR Capital Partners - a company that connects wealthy foreigners to EB-5-eligible investment projects - estimated that 500 to 800 Indians were applying or would apply for EB-5 visas this year, and more than 1,000 would apply in 2019.

Owing to backlogs, experts estimate that it will now take around 15 years to process an EB-5 application from a Chinese national. On the other hand, India currently has no backlog, and applicants can get a green card within two years.

The controversial laboratory-grown meat is starting to gain momentum. Recently, the Food and Drug Administration discussed the existence of cultured meat grown from a few animal cells in a lab. Cell-culture meat makers begin by isolating livestock or poultry cells that have the capacity to renew themselves, and place them into room-size bioreactor tanks, similar to fermenters. The cells are fed oxygen and nutrients and grow into skeletal muscle that can be harvested within a few weeks. That tissue can then be formed into meatballs or chicken strips, for example. Some promoters of this technology see it gradually replacing significant portions of the existing meat industry over time.

Amazon Prime Day - the shopping event started to boost online sales during the non-holiday season with the help of big discounts - was a few days ago. Last year, Prime Day resulted in an 85 per cent surge in sign-ups in the US. However, the prices are often higher than those at most retail stores. Many products are likely to be as expensive or even pricier than they are on Black Friday, according to Phil Dengler of BestBlackFriday.com, a website that tracks deals on Black Friday.