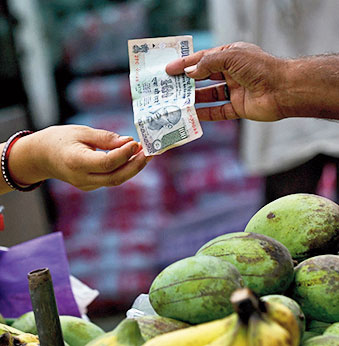 Sir — Laundering money has taken on renewed significance in light of the coronavirus epidemic. Currency is known to be a carrier of all kinds of pathogens. In 2017, a study of $1 bills in New York found around 397 species of bacteria on the surface of the currency notes. Any virus that is left on the surface of the currency can survive for up to 12 days. The US Federal Reserve is withholding part of the physical cash it receives to reduce the circulation of bills and help bring down the chances of the virus spreading. Worryingly, the Reserve Bank of India has taken no such step. It must be more proactive if India is to contend with the threat posed by the pandemic.

Sir — Our shrewd prime minister, Narendra Modi, who has revolutionized the use of social media for political communication in India, tweeted, “This Sunday, thinking of giving up my social media accounts on Facebook, Twitter, Instagram & YouTube. Will keep you all posted”. Immediately millions of his followers reacted in a way that would suggest that this was the end of the world.

Many were sceptical about Modi quitting social media. Unsurprisingly, he clarified that he would be turning over his account to women on the occasion of International Women’s Day on March 8. This move may not be as simple as it seems. The Aam Aadmi Party’s recent victory has been attributed to women voters of Delhi. Expectedly, Modi is trying to appease this constituency. But one look at the condition of women under his prime ministership will reveal the sham of Modi’s words. If that is not enough, perhaps one should ask his mother and his abandoned wife, Jashodaben, how he treats women.

Sir — The editorial, “Quick fix” (March 3), rightly points out that a routine act, such as a transfer, may be perceived as exceptional if the context is extraordinary. The transfer of the Delhi High Court judge, S. Muralidhar, to the Punjab and Haryana High Court is definitely exceptional. Just before his transfer, Muralidhar pulled up the Delhi police for failing to lodge FIRs against some heavyweight Bharatiya Janata Party politicians for incendiary speeches that set sections of Delhi aflame. Curiously, the next bench hearing the case gave the Delhi police four weeks to decide on the said first information reports. This defies logic. Why does the police need four weeks for members of the ruling party when it loses no time to seize so-called anti-nationals or urban Naxals without any evidence?

This incident has an eerie similarity with the Sohrabuddin Sheikh fake encounter case in Gujarat. The Central Bureau of Investigation trial judge, J.T. Utpat, was transferred a day before the hearing that required the presence of Amit Shah, chief accused and then the home minister of Gujarat. Then, the trial judge, B.H. Loya, passed away under mysterious circumstances, a fortnight before the date of hearing again requiring Shah’s attendance. Soon after, Shah and all other accused were discharged by the CBI judge, S.J. Sharma. Clearly, justice no longer relies on facts but on the nature of the accused.

Sir — The sudden transfer of the judge, S. Muralidhar, after a bench headed by him expressed anguish over the dubious role of the police for not filing FIRs against BJP leaders, including a minister, ensured that the matter would no longer be heard by him. At the very least, especially in these fraught times, the government should have kept in mind that justice must not only be done, but it must also be seen to be done. The overnight transfer of the judge to save BJP leaders sent a message that if any judge tries to call a spade a spade, he will face the same fate as that of Muralidhar. This trend is dangerous and may prove fatal to the independence of the judiciary. The Centre has come a cropper in maintaining law and order in Delhi. One hopes that judicial scrutiny will still lead to a course correction. No matter which party’s leaders spread hate, they should be made to face the law.