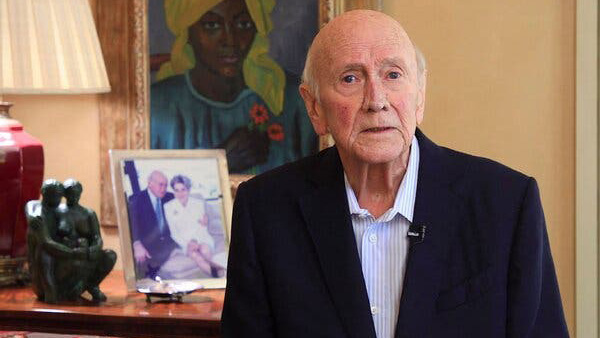 F.W. de Klerk, the former president of South Africa, released a posthumous video message. “I without qualification apologize for the pain and hurt and the indignity and the damage that apartheid has done to Black, brown and Indians in South Africa.”Credit...
F. W. de Klerk Foundation, via Agence France-Presse — Getty Images
The Telegraph   |   Published 13.11.21, 02:31 AM

Sir — The last white president of South Africa, F.W. de Klerk, has left behind a posthumous message of apology for the “pain and indignity” suffered by the people of colour under the apartheid. Klerk, who ordered the release of Nelson Mandela from prison and negotiated a peaceful transfer of power to a government led by people of colour, has an uneven legacy. He is still criticized for some actions, including the failure to curb political violence in those turbulent years. However, his posthumous apology is a reminder for former oppressors that the acknowledgement of and atonement for past crimes is a constant process and must never be forgotten.

Sir — In the last few years, there have been numerous tragic fire accidents in hospitals across the country. In spite of that, nothing seems to have changed; this is evident from the outbreaks at a Covid ward in Ahmednagar and a neonatal unit in Bhopal, both of which lead to tragic losses. There is an urgent need for the strict enforcement of fire safety guidelines in hospitals across India. Hospitals found to be in violation of the norms should be penalized immediately.

Sir — The loss of lives in hospital fires is a blot on our healthcare system. The electrical wiring in most government hospitals is outdated and the staff is ill-equipped to handle a sudden outbreak of fire. Hospital managements across the country must review and update their infrastructure so that such events do not recur.

Sir — The Twenty20 World Cup semi-final match between Pakistan and Australia was thrilling. There were many talented players on both sides and they brought their best to the game. The Pakistan team put up a good fight, but Australia won the match by five wickets. The partnership between Marcus Stoinis and Matthew Wade — they scored 81 runs in just 6.3 overs — tilted the game in favour of the Australians. Cricket fans around the world are now waiting with bated breath for the final match between New Zealand and Australia on Sunday. There is no doubt that it will be quite a treat.

Sir — Kangana Ranaut has always made inflammatory statements, but this time, she went a step too far. She said at an event that India attained “real freedom” in 2014 — that is when Narendra Modi came to power — and that independence from the British in 1947 was “bheek” or alms. This is a grave insult to all the freedom fighters of our nation and has been rightly criticized by many, including the Bharatiya Janata Party member of parliament, Varun Gandhi. Ranaut must be penalized for her statement.

Sir — No one is surprised that Kangana Ranaut forgot all propriety in her rush to sing praises of the prime minister and said that the country attained real freedom only in 2014 and belittled the sacrifices of the martyrs of the freedom struggle. The BJP must know that this is a faux pas; even its most ardent supporters will condemn this statement. The party high command needs to immediately condemn Ranaut’s comments.

Sir — The repeated flooding of Chennai, among other things, has been attributed to faulty city planning. Furthermore, experts are of the opinion that an improvement in the piped supply of water — this reduced dependence on groundwater, resulting in the groundwater table remaining stable — may also have played the culprit. The state government needs to overhaul the infrastructure of the city if it hopes to reduce the miseries of the people.