Advertisement
Home / Opinion / Kashmir: A shrine for many faiths

Kashmir: A shrine for many faiths 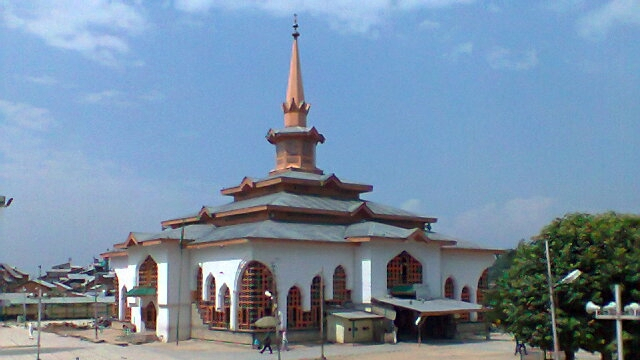 Numerous shrines in Kashmir are revered by Kashmiri Muslims and Pandits — the shrine of the 14th-century saint, Sheikh Nooruddin Walli, (Charar-e-Sharief) of the Reshi order (indigenous mystics) being one example.
Wikipedia
Zohra Batul   |   Published 10.06.21, 03:57 AM

There are thousands of Sufi shrines dotted all over the Kashmir Valley. Kashmir is famously known as ‘Pirwaer’ (garden of sufis and saints). Kashmir is believed to have transformed into an Islamic space through the intervention of Sufi mystics — in particular Kubravi Sufi Mir Saiyid Ali Hamadani and their disciples — says Chitralekha Zutshi, one of the most prominent historians on Kashmir studies. These travelling Sufis also imparted new crafts and skills. Many argue that Shah-i-Hamadan, the most celebrated Sufi of Kashmir, came with a large retinue of immigrant artists, calligraphists, and architects. They introduced the arts of wood-carving, papier-mâché, and shawl and carpet weaving. Besides influencing Kashmir’s society and culture, Sufism also blended well with the everyday lives of the people.

The appeal of mysticism and its inclusive ethos has performed several crucial functions in conflict-ridden Kashmir. Some of the valuable aspects of Sufism in the Kashmir Valley, therefore, merit a detailed scrutiny.

In spite of the periodic political contentions between Pandits and Muslims in Kashmir, the overall culture of religious tolerance did not disappear. Its resilience stemmed from the heterogeneous composition of society as well as from the influence of mysticism. Sufi culture is relatively more accommodating than ‘formal Islam’ wherein people of different religions share a cultural commonality; this is evident in Sufi shrine festivals such as urs (the death anniversary of a saint) that are celebrated by both Muslims and Hindus. Numerous shrines in Kashmir are revered by Kashmiri Muslims and Pandits — the shrine of the 14th-century saint, Sheikh Nooruddin Walli, (Charar-e-Sharief) of the Reshi order (indigenous mystics) being one example. Other notable shrines venerated by both Muslims and Hindus are that of Baba Zain-ud Din at Aishmuqam or the shrine of Sheikh Hamza Makhdum at Srinagar.

Kashmir’s Sufi ethos not only facilitates the building of a congenial culture within different communities but also addresses the lacunae of spatial availability for women in a male-dominated public sphere in conflict. In Kashmir, women offer nimaz (prayer) in all the major mosques and shrines, including Dastegeer Shahib, Makhdoom Sahib, Hazratbal among others. There are common sitting areas where men and women could interact with ease. To the extent that some locals even accuse Sufi culture of encouraging immorality.

One of the most neglected yet significant aspects of Sufi philosophy in conflict-ridden Kashmir lies in its healing power. In case of loss and injustice, religion offers a certain comfort: people can somehow believe that their loss is not for nothing. A large number Kashmiris are coping with stress and trauma. Spirituality provides them with a worldview that offers purpose and meaning to suffering. As Maya Angelou writes, “people whose history and future were threatened each day by extinction considered that it was only by divine intervention that they be able to live at all.”

Besides, the tombs of Sufis are often the only space that offers sanctuary to people dealing with the precariousness of life in conflict. On every occasion, pleasant or unpleasant, people flock to shrines to invoke the deceased saint’s intercession through ritual supplication. In 2020, people congregated in Charar-e-Sharief amidst rumours that an asteroid would brush past earth. Politicians also visit Sufi shrines to seek blessings on different occasions. Farooq Abdullah is a frequent visitor to Charar-e-Sharief; Mehbooba Mufti visited Khanqah-e-Moula after a fire in 2017.

One of the most interesting dimensions about Kashmir’s Sufism is what it brings to the global ‘good Muslim versus bad Muslim debate’. Tariq Ramadan defines ‘good Muslims’ as those who accept the values and customs of the dominant power and are invisible in the public sphere whereas bad Muslims resist “religiously, culturally or politically”. In this partial viewpoint, Sufism is seen as detached from worldly affairs, including politics. However, the belief that Sufism is apathetic to politics is essentially a myth deliberately promoted as an alternative to an assertive Islam demanding political and public presence. We find many cases where Sufism played an active political role and inspired numerous resistance movements. For instance, many Algerians joined Qadiriyya and Libyans entered Sanussi Sufi orders to fight against French and Italian colonialism. Omar al-Mukhtar, the leader of the resistance movement from the Senussi Sufi orders, became an idol for many young Kashmiris, especially after the film on his life and struggle, Lion of the Desert, was released in 1981. Likewise, in the battle for leadership and autonomy from Dogra rule, shrines played a vital role. Within the Muslim fraternity, the control of shrines became imperative to control the movement and its leadership. The financial gains associated with shrines were an additional incentive.

Most scholars working on Kashmir claim that Kashmiriyat — described as a unique Kashmiri composite identity based on inter-communal harmony — derived from Sufism to counter any potential threat to the State. Kashmiriyat is also evoked to hark back to a golden period before orthodox Islam took over Kashmir. In this sense, the Sufi philosophy of syncretism is not endorsed for its positive message only but also to denounce the ‘two-nation theory’ and justify Kashmir’s accession to India.

Therefore, Sufi convictions have various values beyond its function of spreading Islam. Sufi doctrines should not be seen as aloof from politics. Sufism continues to play a social, political, economic and spiritual role in Kashmir’s strife-torn landscape.