George Floyd died as he did and showed that America is no more changed, no more race agnostic now than it was in the 1800s 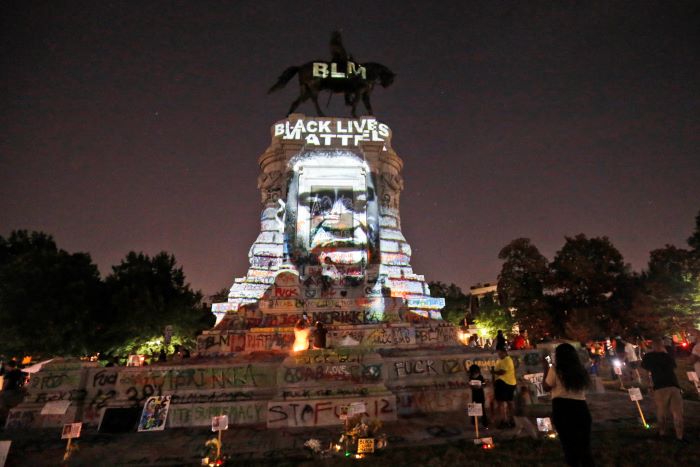 An image of George Floyd is projected on the base of the statue of Confederate General Robert E. Lee in Virginia, US. The statue has been the focal point of protesters over the death of Floyd
AP
Upala Sen   |     |   Published 13.06.20, 09:22 PM

The United States is in the throes of anger over the killing of George Floyd. Actually, it is shocked at what the killing has underpinned, knee on neck --- a myth about the United States. In his 2008 victory speech, then President elect Barack Obama had said, “It's been a long time coming, but tonight, because of what we did on this date in this election at this defining moment, change has come to America.” Myths have a way of creeping into one's system. Good myths and bad myths and myths about change. They mingle with the bloodstream, with such ease too that blood itself, life force incarnate, begins to feel like the second best. George Floyd died as he did and showed that America is no more changed, no more race agnostic now than it was in the 1800s. While lying facedown on the road, Floyd had repeatedly said: “I can't breathe.”

Grief is shock, mourning and helplessness all rolled in one. It demands corrective action. Collective grief demands collective, corrective action. Statues of Confederate Generals, who supported enslaving Blacks, are being pulled down/defaced/defiled across the US. In Alabama, Florida, Kentucky, Indiana, Massachusetts, Minnesota, Tennessee, Virginia. The sentiment and corresponding action has found resonance in Edinburgh, Bristol, Antwerp, Ghent, Brussels, Hamilton. Statues of Christopher Columbus in the US. Winston Churchill, slave-owners and Mahatma Gandhi in the UK; the statue of Nelson Mandela at Parliament Square has been covered up. Protesters set on fire a statue of King Leopold II in Belgium.

A Way Of Life

In India too, defacing old statues and erecting new ones by way of corrective action is de rigueur. Governments invest in statues amounts they wouldn’t even consider for living, breathing citizens. Even in these times of crippling pandemic, the Karnataka government will worry about how to tax this bread and that bread, but will not bat an eyelid to announce a 120-foot statue of Swami Vivekananda. Are those protesting Floyd’s death and racism wrong to pull down statues? Is this any different from the destruction of the Bamiyan Buddhas or the Babri Masjid? How so? Is this better? Is this worse? Will this symbolic corrective begin to address what is really wrong? And is it sufficient to engage with symbols alone? In the meantime, in related news, Virginia protester Chris Green is in coma after being struck on the head with a Confederate statue that was being torn down.