The battle lines of today resonate with historical precedents 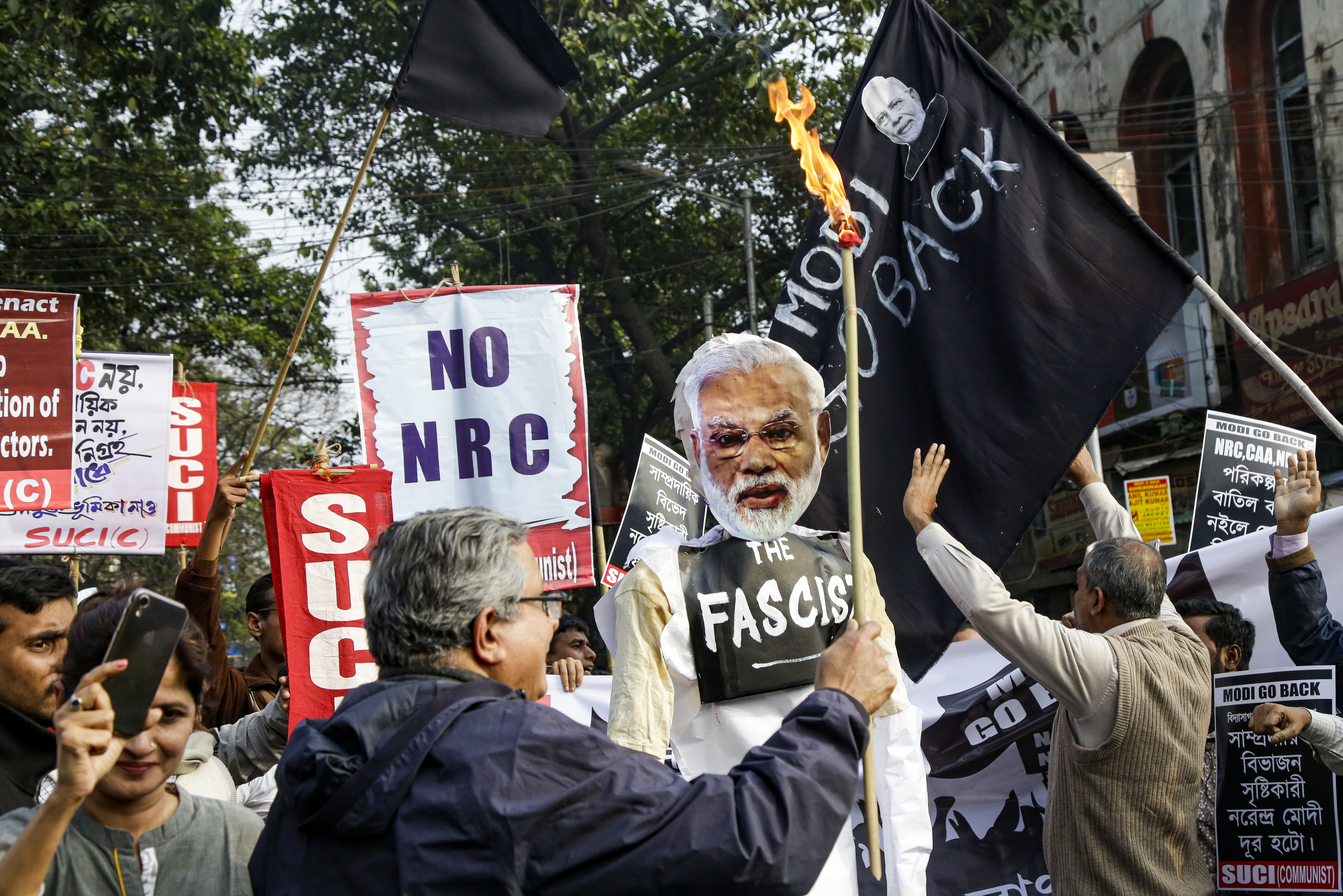 Activists of SUCI-M shout slogan as they prepare to burn an effigy of Narendra Modi to protest his visit and also against the citizenship law, in Kolkata
(AP)
Mahesh Rangarajan   |     |   Published 12.01.20, 07:00 PM

In his book, A Letter from India, the historian and strong supporter of the Indian freedom struggle recounted a conversation with Gandhiji which left him exasperated. When asked how much more could be done to help the wildlife of India, the latter had seemed jocular, even dismissive. Wildlife, he felt, may be declining in the jungles and villages but was on the rise in the towns and cities! Edward J. Thompson, the author, had found men like Jawaharlal Nehru, even Rajaji of Madras Presidency, much more receptive to the need to protect the natural heritage of India.

The chapter in which the anecdote appears is titled, “Mainly about Lions”, and refers to the last lions of Asia secure in their forest home of Gir protected by the local princes. Yet, some years hence, in January 1948, these lions were under serious threat of extinction. Their protector, the Nawab of Junagadh, had fled to Pakistan and trigger-happy hunters set out in search of a trophy.

The saga of Asia’s last lions would have well and truly ended that winter of 1947-48. But the new prime minister aided by the civil servant, M.N. Buch, made sure none was shot. The hunting expeditions of the princes, military and civil officials of the Empire were over and the lions were given an umbrella of protection.

The lions had been symbols of power of a Sunni Muslim dynasty of Pathans. But in 1947-48, long before Kashmir, Junagadh saw tussle between India and Pakistan. Although the ruler fled and the people’s government took over control, not all of the old legacies were dismantled.

This ability to accept something from another era as a symbol was to be central to not just the ethos of nature but to the nature of Statecraft. The lions, once the symbol of a princely house, became part of the heritage of a new nation and, eventually in 1972, the state animal of Gujarat. No one asked where they came from or who had earlier protected them.

It was a philosophy most clearly articulated in probably the finest book by a man now reviled in the popular imagination: The Discovery of India by an inmate of Ahmednagar Fort from August 9, 1942 until late May 1945.

This, the longest jail term of Nehru, found him drawing on the formidable intellectual reserves and energy of his fellow inmates to sketch out not so much a history but a future memoir of India. They — and he thanks each by name — were Pandit Govind Ballabh Pant and Maulana Abul Kalam Azad, Acharya Narendra Deva and M. Asaf Ali.

Written over a period of just 150 days and still available in original form in the archives of the Nehru Memorial Museum & Library, this is a tour de force. Sunil Khilnani calls it, “a remarkable assertion of an individual imagination trying to give his country a unifying sense of itself.” There was a deep sense of anchor in cultures of the past, even the date of imprisonment being marked out in terms familiar to many Indians. The coming of the new moon and the festival of lights, Deepawali.

But the idea was one of India as, “like some ancient palimpsest on which layer upon layer of thought and reverie had been inscribed, and yet no succeeding layer had completely hidden or erased what had been written previously”. This notion of synthesis, a desire to absorb the new but not wipe out the old, was more than a belief. It was a foundational idea.

There was more to the struggle for freedom then than an aspiration for power. It was not merely about ending British rule. And much as they might have differed on what to do next and how, the inmates of the Fort had one common dream: an India for all Indians.

Gandhiji’s handpicked successor gave the idea clarity in prose that had the magic of verse. India, as Nehru recalled telling crowds in his 1937 election meetings, was not just its mountains and rivers, its fields and its forests. It was, “essentially these millions... of people like them and me who were spread out over this vast land.”

Partition turned the dream into a nightmare. For Rajendra Prasad, as much as for Nehru, the very idea of India spanned divides of creed or faith, sect or religion. Few now read the former’s lucid account against the logic of division. Titled India Divided and published in 1946, the same year as The Discovery of India, it deserves special mention. India was unified by a shared history, not by origins or faith.

His deep abhorrence for the latter lay in the rejection of race-based nationalism as of the Sudeten Germans who claimed to be part of the Reich simply for being German speakers and “Aryans” even as these rights were denied to German Jews. For the men and women of the freedom struggle, to cede defeat to the idea of a unified India was a price they paid. ‘Divide and Quit’ was the leitmotif of the retreating Empire in India. Ditto Ireland, Cyprus, Palestine and Nigeria.

This set of insights and debates has more, not less, salience today. After all, the idea of an India where Hindus would stand first in line was not merely that of the Hindu Mahasabha or other extremist groups.

Writing from Calcutta on June 7, 1947, B.M. Birla asked if the partitioned area would be a Muslim state, was it not logical to take the next step.“Is it not time that we consider Hindustan as a Hindu state with Hinduism as the state religion?” Sardar Patel’s retort left no room for ambiguity. He wrote,“We must not forget there are other minorities whose protection is our primary responsibility. The state must exist for all, irrespective of creed. [emphasis added]”

The dream of freedom was for a country, a home for and of all. This was not the route taken by many Asian states. Buddhism got central prominence in Ceylon, Bhutan and Burma. China imposed a stern atheism on all, including Tibet; Pakistan denied rights to the Ahmadiyas. India’s record may have blemishes but the ideal was clear.

The country was for all: there was no prior right for Hindus or for Hindi. This was an article of faith for all the founders: Prasad, Pant and Rajaji as much as Nehru and Ambedkar.

This is why the battle lines of today resonate with historical precedents. There was the road not taken and the dream that tried to take shape. There can, and should, be debates on refuge and citizenship for those who are denied justice by States founded on faith. To deny anyone refuge on merely grounds of faith will mean the unravelling of India.

India’s ability to embrace diversity, natural as much as cultural, was its innate strength. It was not a melting pot à la the United States of America. Nor was it to be an ethnos run by a dominant nationality of Great Russians like the Russia of the Tsars.

To make faith a marker of citizenship is an affront to India, our shared ethos and syncretic history. The dream still lives.

Let Pakistan pass a CAA, Muslims can go there then: BJP MLA

Modi says youth being misled on CAA amid protests in Kolkata