The centuries-old Hindu temple in sea-erosion-affected Satabhaya gram panchayat in Kendrapara district is set to get a new address from April 20. 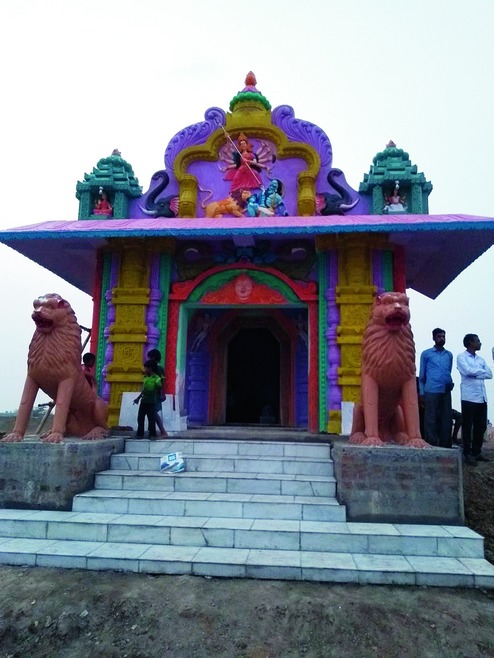 Kendrapara: The centuries-old Hindu temple in sea-erosion-affected Satabhaya gram panchayat in Kendrapara district is set to get a new address from April 20.

The deity will be relocated at the Bagapatia rehabilitation colony for the sea-erosion-affected people on April 20, said an official.

Alongside the shifting the people from the vulnerable area to a safer resettlement colony, the Panchuvarahi deity will also be relocated from the temple to ensure the safety of the presiding deity of the sea-battered villages.

The deity will be taken out in a grand procession on April 20 from the temple to the newly built one at the Bagapatia resettlement colony, which is about eight kilometres from Satabhaya. Special rituals will also be performed on that day following the religious tradition of the place. The deity will be installed at the colony with further rituals, said Shibendra Narayan Bhanjadeo, a member of the former Rajkanika royal family.

The shifting of the deity is being done with the accord of the administration.

As the sea is striding rapidly towards the Panchuvarahi temple nestled along the idyllic shoreline of Satabhaya coast, the shakti cult shrine had to be safeguarded. Though priesthood is considered an exclusive right of males elsewhere, women also perform puja rituals at the Panchuvarahi shrine.

Residents of Satabhaya village are happy with the "unconventional" practice. The practice will also be followed at the new temple, which dates back to a long time, he added.

In another development, forsaking emotional bonding with their ancestral village, people from the sea-erosion-hit pockets of Kendrapara district have begun heading towards their new address.

Constantly experiencing the travails and sufferings of seeing their houses gobbled up by mighty Bay of Bengal, most of the 571 identified families have left for good their homeland in Satabhaya to get resettled in Bagapatia resettlement colony.