Heavy silting and unchecked prawn farming are posing a serious threat to the Chilika lagoon, the largest brackish water lake of Asia straddling three districts of the state. 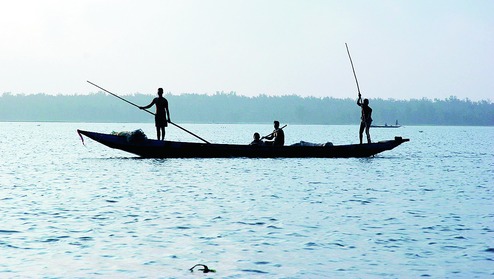 Bhubaneswar, Feb. 25: Heavy silting and unchecked prawn farming are posing a serious threat to the Chilika lagoon, the largest brackish water lake of Asia straddling three districts of the state.

Prawn culture, which has brought traditional fishermen face to face with bigger farmers, has been a contributing factor to the rising silt load of the lake adversely impacting its bio-diversity. Silting, it is feared, could also lead to the shrinkage of the lake area, which fluctuates between 1,165sqkm and 906sqkm, and make it shallow.

Environmentalist Sailabala Padhi said both prawn culture and the growing silt load could impact the lake's salinity level which would have a bearing on its flora and fauna. She said: "Urgent measures are required to check the trend so that the lake's bio-diversity is not affected badly."

The catchment area of Chilika that covers parts of Khurda, Puri and Ganjam districts has a rock, sand and mud substratum. It contains a wide range of sedimentary particles, such as clay, silt, sand and gravel. But the major part is silt. Around 1.6 million tonnes of sediment, particularly silt, is deposited in the lake by rivers such as Daya.

Prawn culture has been a major bone of contention between culturists and traditional fishermen who say that their catch has been falling because of the prawn bunds ( gherries) that dot the lake.

"Prawn farming in the lake is illegal but it continues with the support of powerful businessmen and bureaucrats. Even politicians have stakes in it. We are opposing it because it directly impacts our livelihood," said Balaram Das, a traditional fisherman, who has been fighting prawn culture for a long time.

Prawn gherries obstruct the natural flow of water in the lake, increasing its silt load. In turn, this affects its salinity level that sustains a large variety of flora and fauna, part of which is food for local and migratory birds that spend winters in the lagoon. The reduction in the lake's depth due to the rise in its bed, a result of heavy silt deposit, has a direct bearing on the quality of its water that sustains its aquatic life.

Traditional fishermen allege that since even bureaucrats have a stake in the lucrative prawn trade, the occasional drives carried out by the administration to demolish prawn enclosures in the lake are nothing but eyewash. "Prawn enclosures are back in the lake soon after the drive ends. So, it serves no purpose. The government lacks the will to act against the prawn mafia," said Das.