Costing Rs 133 crore, the 1.9-km Maitri Setu has been built over the Feni river connecting Sabroom in India with Ramgarh in the neighbouring country 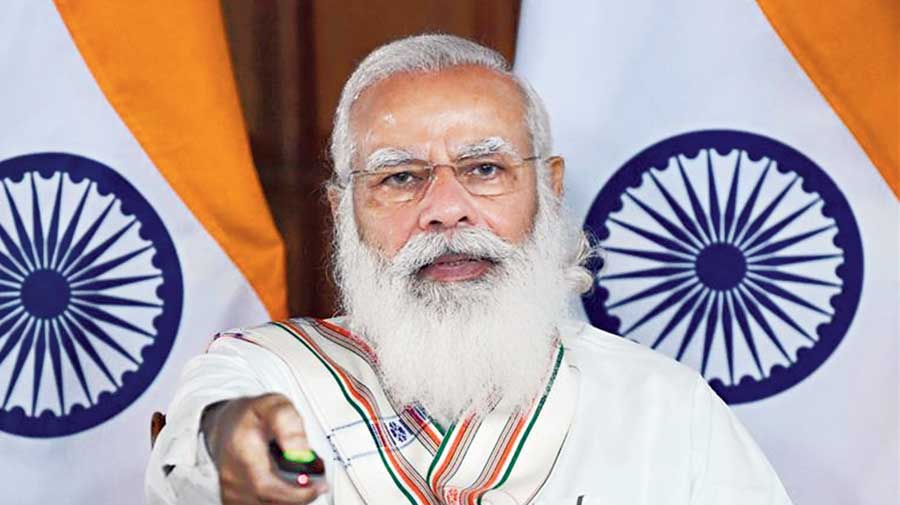 Prime Minister Narendra Modi inaugurates the Maitri Setu and other infrastructure projects in Tripura on Tuesday through video-conference from Delhi
Sourced by The Telegraph
Umanand Jaiswal   |   Guwahati   |   Published 10.03.21, 01:19 AM

Prime Minister Narendra Modi on Tuesday inaugurated Maitri Setu between India and Bangladesh, a bridge that is poised to herald a new chapter for trade and people-to-people movement between the neighbouring countries through Sabroom in south Tripura district.

Built at a cost of Rs 133 crore, the 1.9-km Maitri Setu, has been built over the Feni river connecting Sabroom in India with Ramgarh in Bangladesh.

The inauguration marked the third anniversary of the BJP-IPFT (Indigenous People’s Front of Tripura) government in Tripura with Modi inaugurating and laying the foundation stone of nine infrastructure projects worth Rs 3,518 crore in the state.

The alliance government came to power in 2018, ending the Left’s 25 years of uninterrupted reign in the state.

Inaugurating the bridge through a videoconference, Modi said the improved connectivity is not only strengthening the friendship between India and Bangladesh but also proving to be a strong link of business.

“Due to this bridge over the Feni river, Agartala will become the nearest city to an international sea port in India. Projects related to broadening of NH-08 and NH-208… for which foundation stone was laid will strengthen the connectivity of the Northeast with the port,” Modi said.

He informed that the entire region is being developed as a trade corridor between India and Bangladesh while emphasising that rail and water connectivity projects that have been realised in the recent years have been strengthened by this bridge.

“This will improve connectivity of south Assam, Mizoram and Manipur along with Tripura with Bangladesh and Southeast Asia. The bridge will give an impetus to the economic opportunity in Bangladesh also,” the Prime Minister said, thanking the Bangladesh government for its cooperation in the completion of the project.

A video message from Bangladesh Prime Minister Sheikh Hasina was played on the occasion.

Modi also laid the foundation stone for setting up a Rs 232 crore integrated checkpost (ICP) at Sabroom. It will work like a full-fledged logistic hub with warehouses and container trans-shipment facilities, easing the movement of goods and passengers between the two countries, provide new market opportunities for products from the Northeast.

Modi said Tripura was experiencing the clear difference between the 30 years of earlier governments and the “double engine” government of the last three years with the hike in the Centre’s allocation for the state’s development.

“For the first time, MSP has been decided in Tripura where farmers used to face many problems for selling their produce,” he added.