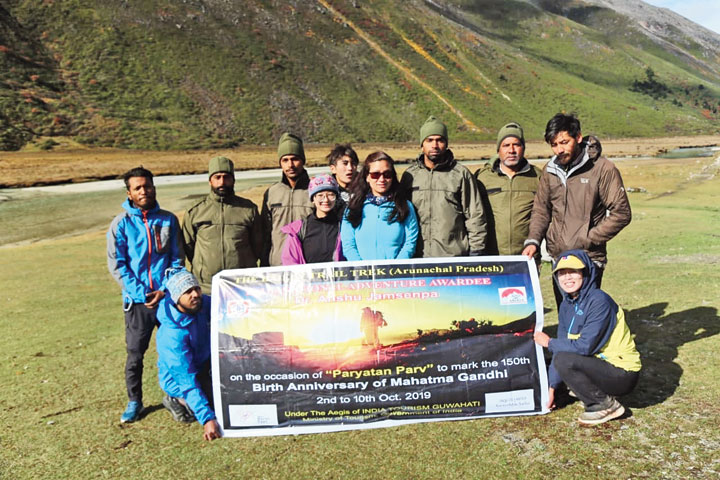 A plogging trek along the Bailey Trail in West Kameng and Tawang districts of Arunachal Pradesh, organised by the Arunachal Mountaineering and Adventure Sports Association, in collaboration with the ministry of tourism, regional office, Guwahati, concluded on Saturday.

The 10-day trek-route-cleaning-drive touching 15,000 feet above sea level was organised as a part of the Paryatan Parv to commemorate the 150th birth anniversary of Mahatma Gandhi from October 3-12. The 12-member team was led by the famed Everester Anshu Jamsenpa. It included three members from Ladakh, two from Assam and seven from Arunachal.

The Bailey Trail is a trek that traces the historic route taken by Lt Col F.M. Bailey and Capt. H.T. Morshed, both British officers, who surveyed the area in 1911-12. The trek path was initially an ancient trade route that connected Burma, India and Tibet.

The surveyed area and the route were used by Sir Henry McMahon, then defence secretary of India, to draw his famous McMahon Line in 1914. En route there are alpine lakes and breathtaking views of Mt Gorichen (21,286 feet) and Mt Kangto (23,129 feet).

The team collected plastic litter and non-biodegradable waste and disposed of them. They braved heavy showers while trekking in the high mountain passes touching 14927 feet at Tse La, the highest point of the trek.

Paramilitary forces stationed along the Bailey Trail and the yak herders in hamlets en route were inspired by Anshu, one of the brand ambassadors of the Swachh Bharat Abhiyan.They not joined the team in cleaning their respective areas but also pledged to keep their surroundings clean.

Anshu said: “I have been religiously picking up plastic litter along trek routes and I urge one and all to do the same.”

“This is the least we can do for our environment,” Anshu, who made a world record in May 2017 by scaling Mt Everest for a record four times in six years, said.