The convocation scheduled for March 1 has been cancelled 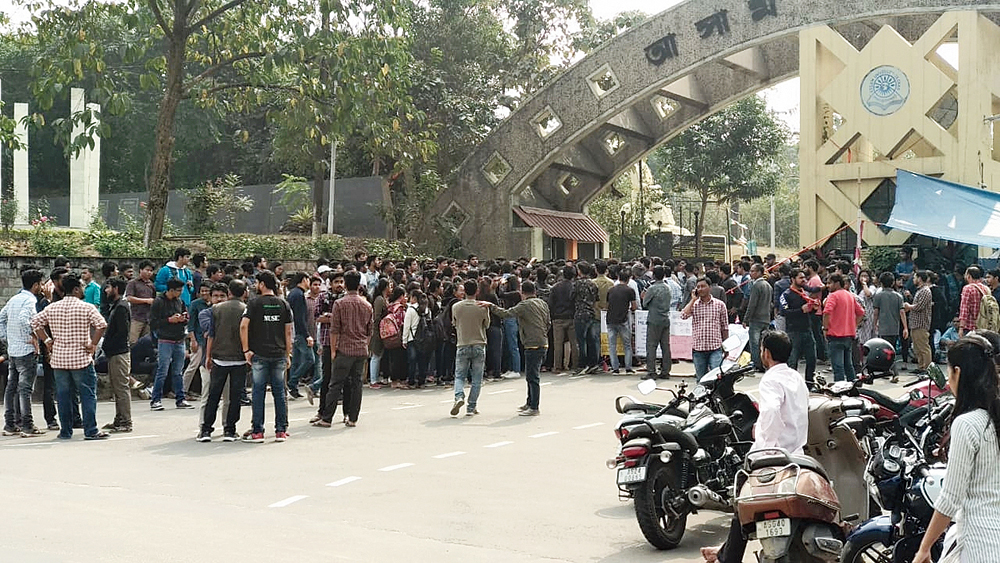 The situation at Assam University in Cachar district took a turn for the worse as two groups of students clashed within an hour of the authorities setting a 24-hour deadline to withdraw the 10-day strike in protest against the rustication of research scholar Milan Das.

In the morning, about 100 students tried to enter the campus on the university bus but the striking students prevented them and a scuffle ensued. The students on the bus raised slogans demanding resumption of classes. In the evening, a large number of students again gathered at the entrance and got into a scuffle.

According to latest reports, some officials have called the striking students to discuss the withdrawal of the strike.

Vice-chancellor Dilip Kumar Nath, who resumed duty on Tuesday, confirmed it had to cancel the convocation ceremony on March 1 as no work could be completed owing to the strike. He said they had repeatedly appealed to the students to withdraw the strike.

The authorities also put up a notice on Wednesday that regular classes would resume on Thursday.

Assam University Students’ Union president Biswarup Bhattacharjee said they would not withdraw the strike till its demands were fulfilled. A section of students expressed serious concern over the strike.

Das, a research scholar of the department of ecology and environmental science, was rusticated from the university on February 8 for two years for alleged unlawful activities. His entry into the university was also banned and an FIR registered against him at Silchar police station by the university authorities. Das is also the president of AU Research Scholars’ Forum and former president of the student union. Students went on strike on February 10 and 12. They also started a hunger strike demanding withdrawal of the rustication order and the FIR against Das.

Sources said Das had submitted an application to Nath and it was discussed in the executive council meeting held at Radhamadhav College on Tuesday night. Almost all members expressed dissatisfaction and said Das should tender an apology with a commitment that such events will not be repeated. It also decided to ask the students to withdraw the strike or shift it to another place.