Six more pygmy hogs have made Bornadi wildlife sanctuary in Assam's Udalguri district their home, taking their population there to 22. 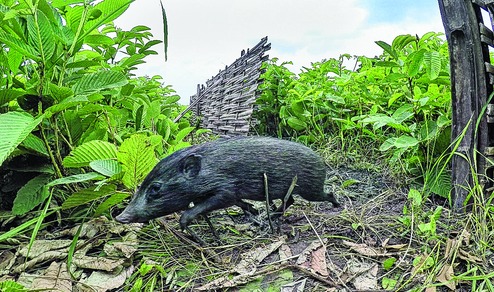 Guwahati: Six more pygmy hogs have made Bornadi wildlife sanctuary in Assam's Udalguri district their home, taking their population there to 22.

The release of the "critically endangered" species on Friday was part of the ongoing Pygmy Hog Conservation Programme. Of the six, three were males and three females. With this, the sanctuary now has 10 males and 12 females.

The programme aims to save the species and its habitat as part of a collaborative project of Durrell Wildlife Conservation Trust, IUCN/SSC Wild Pig Specialist Group, Assam forest department and the ministry of environment, forests and climate change with EcoSystems-India and Aaranyak as local partners.

The major activities of this programme include conservation breeding and reintroduction of pygmy hogs after habitat restoration.

"Before being released in the wild, the hogs are taught to survive independently at a pre-release facility at Potasali in Nameri tiger reserve. The released hogs are monitored using field signs (nests, forage marks, footprints and droppings) and camera traps," an official associated with the programme said on Saturday.

The IUCN Red List categorises the species as "critically endangered", putting it among the most-threatened of all mammals. It is also listed in Schedule I of the Indian Wildlife (Protection) Act. Pygmy hog is a unique member of the wild pig family.

Adult males are about 10-inches tall and weigh between 8kg and 9kg. Pygmy hogs live in small groups of up to eight and sleep in grass nests round the year.

The official said the programme is trying to build a viable population in three places outside Manas.

"We have followed all international norms in releasing the hogs in the wild and it will require work of another dozen years to save the species from extinction. We are on the job and will do our best to save it from getting extinct," the official said.