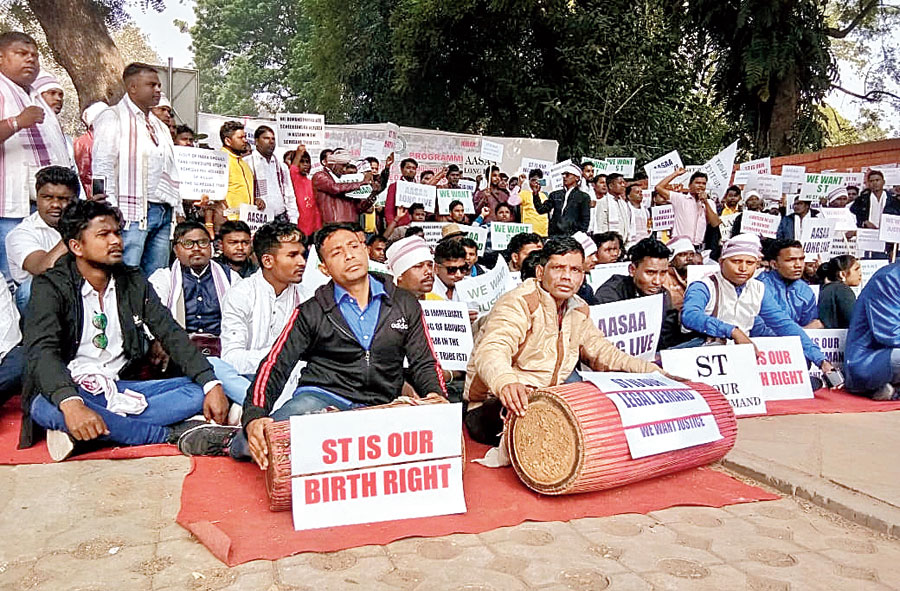 The All Adivasi Students’ Association of Assam (AASAA) staged a five-hour sit-in at Jantar Mantar in New Delhi on Friday in pursuance of their long-pending demand of granting Scheduled Tribe (ST) status to the Adivasis of Assam.

The protest was held under the aegis of AASAA, Assam chapter and Delhi-NCR chapter. Assam chapter president Pradeep Nag, vice-president Stephen Lakra, general secretary Joseph Minz and more than 400 activists, including central and district committee members, participated in the demonstration.

Nag said, “Adivasis, comprising Oraons, Mundas, Santhals, Kharias, Gonds, Sawras and Bhumij, are the most backward community of Assam. The BJP, in its poll manifesto, had promised to grant ST status to the Adivasis of Assam once voted to power but it has not shown any interest in the issue. We believe in democratic principles but this does not mean that we will wait for years for our legitimate rights.”

Lakra said, “Many Adivasis have sacrificed their lives in the past 20 years in Assam for ST status. Despite the fact that our ancestors and fellow Adivasis are enjoying ST status in states like Bihar, Odisha, Chattisgarh and Jharkhand and that the Adivasis of Assam meet the four criteria of tribal characteristics, neither the Centre nor the state government has found it necessary to fulfil their pre-poll promises.”

Sunita Ekka, a protester from Baksa, said, “Like the previous Congress government, the BJP is also postponing the ST status issue.” A protester from Udalguri, Laxman Porja said, “We want ST status to live with dignity and to protect our economic, political and constitutional rights.”

Marta Kandulna, another protester, said, “We request the BJP government to grant special ST status to all the Adivasi communities of Assam before the 2021 Assembly polls, failing which we will block the entry of BJP leaders in the Adivasi-dominated areas.”

The AASAA submitted a memorandum to Union home minister Amit Shah, demanding inclusion of Assam’s Adivasis in the ST list.