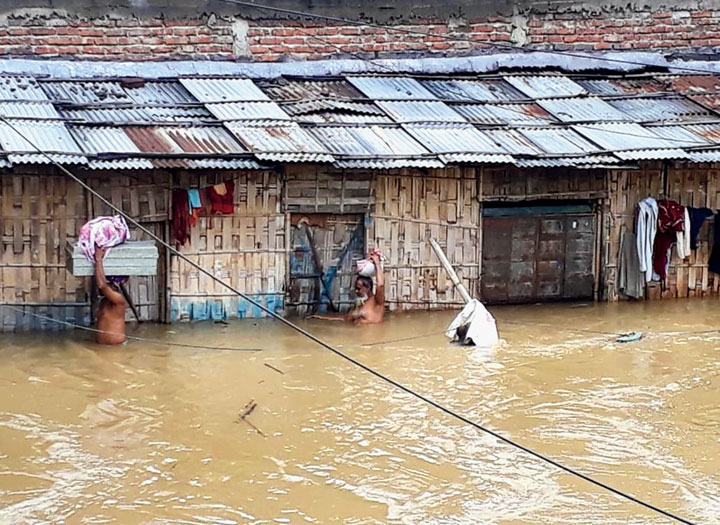 Incessant rainfall since Thursday and the excess water released from the Neepco-operated Kopili hydroelectric project submerged large parts of Dima Hasao and Hojai districts and parts of Nagaon on Sunday.

In Kumrakata, the main road connecting Hojai to West Karbi Anglong is completely flooded. Locals are using ferries to move between villages. The Kali temple at Nabhanga has been also inundated.

The Langri bridge, which connects Umrangsu in Dima Hasao to Lanka in Hojai, was washed away on Saturday night along with two dumper trucks. One truck was taken away by the strong current while another got stuck in the riverbed where the bridge was. However, there were no casualties or injuries. Locals alleged the bridge was constructed using substandard materials and hence, it was washed away. A local resident, Joy Singh, said most of the vehicles are now taking a diversion from the route. He alleged that they contacted the district administration and emergency response services early in the morning but they reached very late.

“The water level increased suddenly in the wee hours. We somehow managed to reach the roadside using boats,” a villager said.

Pranab Thousen, a poultry farm owner in Theplaguri, said: “I couldn’t save 3,000 chicks from drowning. I started this poultry farm a few days back. I don’t know what I will do now.”

“The entire area is reeling under floods forcing us to take shelter on the roadside. We don’t have any food,” said Nipon Thousen, a farmer.

An official said they are taking measures to move villagers to safer places to prevent any casualty. Some affected people have taken shelter in a school at Raikata.

The administration is trying to ascertain the number of people affected by the floods.