Filmmaker wants to depict life and times of Lachit across India through the film because he was a national hero, not only of Assam where the warrior is eulogised 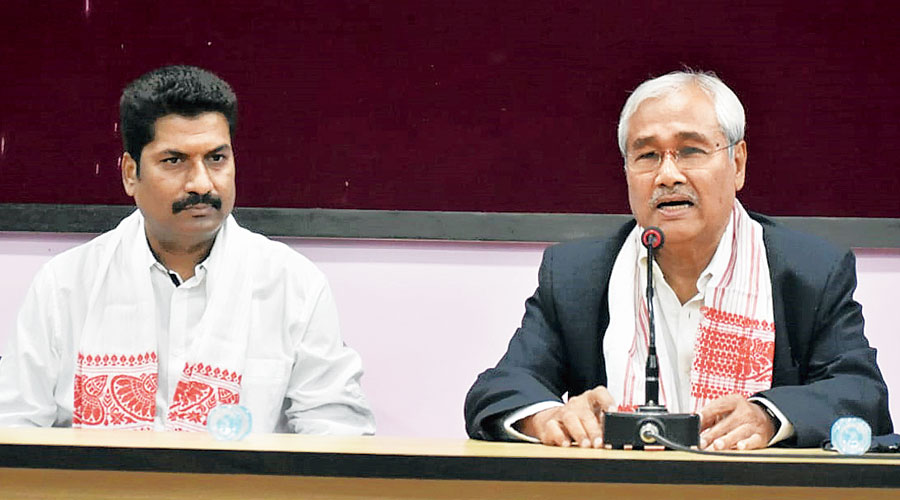 Jahnu Barua (on right) announcing the film on Lachit Barphukan in Guwahati on Thursday
The Telegraph picture
Umanand Jaiswal   |   Guwahati   |   Published 04.12.20, 04:42 AM

Eminent filmmaker Jahnu Barua will direct a Hindi film on legendary Ahom general Lachit Borphukan so that the war hero gets his “overdue share of limelight on the national and the international stage”.

“For well over 20 years, I have been living with this dream of doing a film on my favourite war hero Lachit. There were a number of government initiatives to this
effect, including proposal from two former governors, but because of budgetary constraint the production of such a mega project could not be taken up,” Barua, a multiple National Award-winning filmmaker, said.

“ ...after more than seven decades of Independence Assam’s war hero and the pride of India will get his overdue limelight on the national and international stage,” Barua said.

The announcement comes at a time when Lachit and his exploits in the 1671 Battle of Saraighat to check the advancing Mughal army are invoked only to sway voters before every state and general elections.

It is no different in the run-up to the 2021 Assembly polls in Assam. The ruling BJP and its allies use the Saraighat metaphor against illegal Bangladeshi Muslims — and by default against the AIUDF which is seen by the ruling party as backing a community which poses a serious threat to Assamese identity.

The Congress and the newly floated Assam Jatiya Parishad counter by pointing out that Muslims, who constitute over 34 per cent of the state’s population, have coexisted for generations by referring to Bagh Hazarika, one of the main Ahom commanders in the Battle of Saraighat, was an Assamese Muslim fighting against the formidable Mughal army led by Raja Ram Singh, a Hindu.

The 1952-born Barua is known for films such as Maine Gandhi Ko Nahin Mara, Halodhia Choraye Baodhan Khai, Firingoti and Xagoroloi Bohu Door, among others..

Barua now wants to depict the story of Lachit’s life and times across India through the film because he was a national hero, not only of Assam where the warrior is eulogised and revered for his leadership and heroism.

Every year on November 24 the Assam government celebrates Lachit Diwas in remembrance of the general’s heroism. Since 1999, the National Defence Academy (NDA) confers the Lachit Borphukan gold medal to its best cadet but still most in Assam feel not many know about the Ahom general outside the state.

On Wednesday, Assam chief minister Sarbananda Sonowal unveiled a 33-feet life-size statue of Lachit at Sepon in Charaideo district and said the general’s courage and valour gave distinct identity to the Assamese people worldwide inspiring generations after generations to dedicate themselves selflessly in the service of the nation.

Thanking industrialist and producer Suresh Sharma for his willingness to produce the multi-crore mega film, Barua said research on the project has already begun under the guidance of Prof. J.N. Phukan, a scholar and former head of the department of history, Gauhati University, to depict with accuracy the events leading to the Battle of Saraighat, which catapulted the Ahom general to the status of a legend.

To be produced by Guwahati-based Dream House Productionz, besides top production houses of the country, the film is expected to be released by late 2022. The film will have a leading actor of the country playing the role of the Ahom general, a statement said.