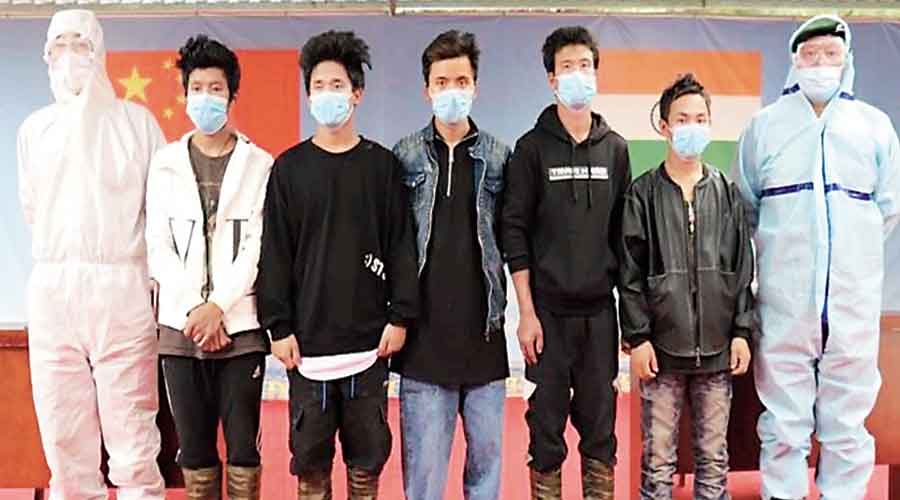 The five youths with army personnel after their release at Kibithu on Saturday
Telegraph picture
Umanand Jaiswal   |   Guwahati   |   Published 13.09.20, 01:08 AM

Chinese troops on Saturday handed over five youths from Arunachal Pradesh’s Upper Subansiri district, who had strayed across the Line of Actual Control, to the Indian Army at Kibithu in Anjaw district, the third such handover this year.

Tezpur-based defence PRO Lt Col Harsh Wardhan Pande announced the handover, adding that the five youths will be sent home after 14 days of quarantine according to Covid-19 norms.

The youths from Nacho circle, who had “inadvertently strayed” into China on September 2 during a hunting trip, will be quarantined at Kibithu, around 8km from the LAC. Kibithu is a 3-4 days’ journey from Nacho.

Pande said the people of the frontier state were fond of exploring the nature for medicinal herbs and possess traditional flair for hunting which involves surviving off the land for weeks in jungles and far-flung remote areas, claiming that this could have led to the youths landing up in the neighbouring country.

India is presently engaged in a tense border standoff with China in eastern Ladakh.

“During such adventurous forays, at times youth have inadvertently strayed to the other side of the LAC. Indian Army has always been proactive in tracing the lost locals and helping them return home,” Pande said.

The youths went missing from the Sera 7 border point near the LAC, about 10-12 days’ trek from Nacho.

The 1,080km-long India-China border is porous and disputed. Twelve districts of Arunachal Pradesh share borders with China. Upper Subansiri was one of the districts affected during the1962 India-China war.

China claims the frontier state as part of South Tibet.

Pande said three incidents of people straying across the LAC took place this year in Upper Subansiri and West Siang districts, including the latest one.

“All such individuals were brought back home safely after consistent efforts and coordination by Indian Army in the past,” he said, adding that the People’s Liberation Army (PLA) of China had confirmed on September 8 that the youths were found on their side.

Union minister of state Kiren Rijiju and Arunachal Pradesh chief minister Pema Khandu thanked the army for its active role in ensuring the safe return of the youths.

Tagin Cultural Society secretary-general Lardik Kare and Prakash Ringling, elder brother of one of the youths, also thanked the state government, local MLA and MP (Rijiju) for their support in securing the release of the boys. They also thanked the Chinese troops for releasing the youths.

“I want to thank the army , the Centre, state government and also the Chinese troops for the safe return of our brothers. I thank the Chinese for their gesture,” Ringling said.

In a report, Global Times, quoting a source, said the youths recently trespassed the border and entered the Shannan prefecture of Tibet.

“The Indian side often sends staff via this means to gather intelligence of China. This is how it encroaches China-controlled areas. The Chinese side has detained, warned and educated the five persons, who will be released soon, the source said,” the report said.

Army sources responded to the claim by saying why the youths were released if they were indeed intelligence personnel.