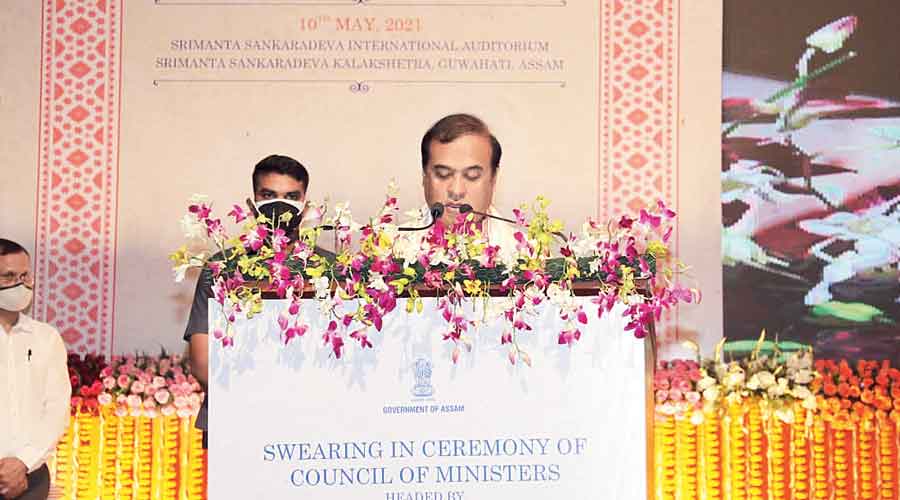 Himanta Biswa Sarma, who was sworn in as the 15th chief minister of Assam here on Monday, will continue to pursue the policy of the government led by his predecessor Sarbananda Sonowal on the stalled National Register of Citizens.

“The government’s stand is clear on the NRC. We support re-verification of 20 per cent of the names included in the border districts and 10 per cent in the other districts,” chief minister Sarma said at his maiden media interaction soon after his swearing-in at the Srimanta Sankaradeva Kalakshetra.

Thirteen ministers were also sworn in at the function.

Revealing his government’s plan on the NRC, a register of Indian citizens, and its immediate priorities, topmost being controlling the alarming Covid-19 situation in the state, Sarma, 52, further said: “After the re-verification, if we find the discrepancies are negligible, we will proceed with the existing NRC. But if there are huge anomalies, we will want the court (the Supreme Court) to take a fresh look. After taking charge, we will review the situation vis-à-vis the NRC and keep sharing the updates with you all.”

The erstwhile Sonowal-led government too had sought sample re-verification of names in the Supreme Court before the updated NRC was published on August 31, 2019. However, the plea was rejected by the apex court after then NRC state coordinator Prateek Hajela apprised the court that 27 per cent of the included names were re-verified.

The updated NRC had excluded 19,06,657 of the 3,30,27,661 applicants with several organisations and the government expressing concern over suspected illegal migrants allegedly getting their names included in the NRC.

The 1951 NRC was updated under the monitoring of the apex court with March 24, 1971, as the cut-off date as stated in the 1985 Assam Accord for detection and deportation of illegal migrants, especially those from Bangladesh. Those left out of the NRC can appeal for inclusion in the foreigners tribunals with proper documents but this process has not yet started.

Besides the NRC, Sarma’s other priorities included:

⚫ Control the Covid-19 surge which has reached an alarming level with daily cases crossing 5,000. The first cabinet meeting to be held on Tuesday will discuss all aspects and come up with an appropriate response. “Unless Covid-19 situation is controlled in Assam, the situation in the other northeastern states cannot be controlled,” Sarma said.

⚫ Fulfil pre-poll promises that included jobs to one lakh youth within a year, waiver of microfinance loans availed by women, increasing the assistance under Orunodoi (direct benefit transfer) scheme and making Assam flood-free.

⚫ Appeal to insurgent groups to lay down arms in the next five years for lasting peace, especially Ulfa (Independent) chief Paresh Barua to come forward for negotiations.

Asserting that his government will be proactive, Sarma also said other pre-poll promises such as laws against “love jihad” and “land jihad” would be implemented.

A major decision taken soon after the swearing-in ceremony was the cancellation of the postponed higher secondary first-year exam scheduled for May 4 and promoting all candidates to the second year.

The other important decision was appointing senior bureaucrat Samir Sinha as the principal secretary to the chief minister.

Prime Minister Narendra Modi and Union home minister Amit Shah tweeted their congratulations. Modi said he was confident that the Sarma-led government will add momentum to the development journey of Assam and fulfil the aspirations of the people.

Of the 13 ministers sworn in along with Sarma, seven were also part of the previous Sonowal ministry.