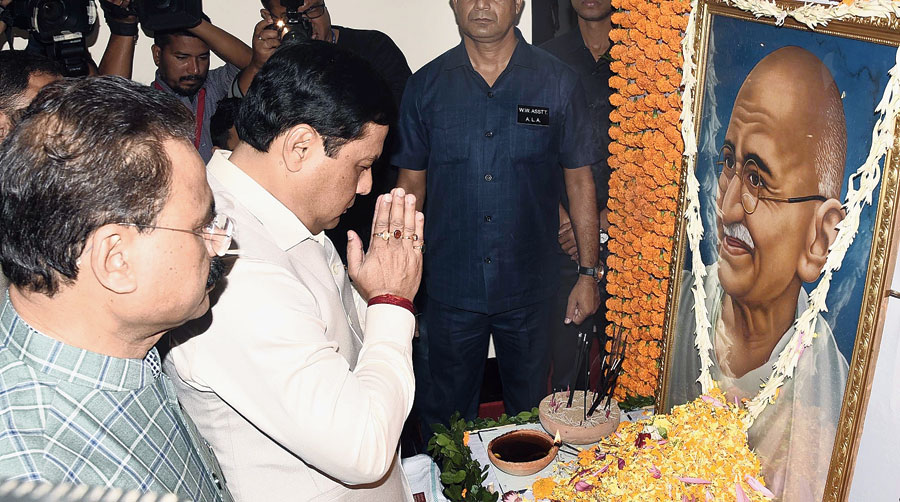 Assam chief minister Sarbananda Sonowal on Friday exhorted all people’s representatives to uphold the teachings and philosophy of non-violence, honesty, cleanliness and service to the masses to ensure that all live peacefully with economic independence.

Participating in a discussion to commemorate the 150th birth anniversary of Mahatma Gandhi in the House, Sonowal said all MLAs gathered in the Assembly should convey a message to the masses that they should live together, work for society and keep the state clean.

“Gandhiji said that we have to sacrifice greed to create an environment for all to live with dignity. The people’s representatives have the responsibility towards achieving this,” the chief minister said.

Quoting the Mahatma that India lives in its villages, the chief minister urged all legislators and panchayat members to uphold Gandhiji’s ideals, implement the panchayati raj system and properly utilise funds for the welfare of people.

The fight against violence can be won with Bapu’s message on ahimsa (non-violence), Sonowal added.

Former Assam chief minister Tarun Gogoi participated in a discussion on the life, works, and religious pluralism of the Father of the Nation.

Another former chief minister Prafulla Kumar Mahanta traced the early life and background of Mahatma Gandhi and his struggle for the Independence.

Before the House assembled to pay tributes to the Mahatma, the Congress MLAs sat at the doorway with a portrait of Gandhiji and chanted Raghupati Raghav Raja Ram, the bhajan that was widely popularised by Bapu.

Following the discussion, the week-long winter session of the Assembly was declared adjourned sine die by the Speaker.