Till now, 29 positive cases have been reported in the state, including the dead person 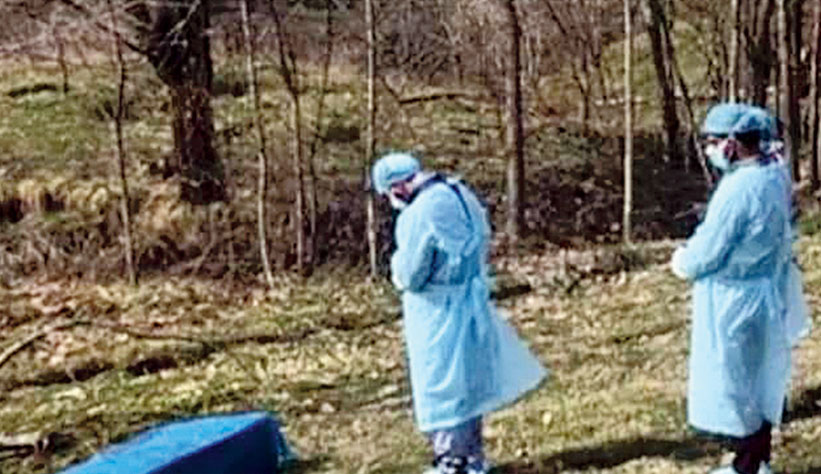 The Northeast recorded its first Covid-19 death as a 65-year-old man from Assam’s Hailakandi district died early on Friday.

His last rites were performed with all necessary precautions. His family members, now in quarantine, could not join the rituals.

He is survived by his wife, son and daughter.

He was declared dead around 1.55am on Friday at Silchar Medical College Hospital. His condition was critical since Thursday evening.

Till now, 29 positive cases have been reported in the state, including the dead person.

Assam health minister Himanta Biswa Sarma said: “It’s very unfortunate that despite all efforts he died. Since his family members are at a quarantine centre, they could have a last glance at him from a distance. Later, in the presence of Hailakandi district administration officials, his last rites were performed. All the people present there were given all necessary prevention including Personal Protection Equipment (PPE) kit.”

The patient’s body was buried around 9.45am on Saturday at an isolated place in line with guidelines laid down by the Union government, 12km from his native village.

It has already been sealed and declared a “containment zone” by the district administration. His burial was attended by relatives and friends amid social distancing and all precautionary measures. A local imam was also present and janaza was held.

He was reportedly asymptomatic when his swab sample was found positive and was sent to SMCH by a team of Integrated Disease Surveillance Project (IDSP) on Tuesday evening. His condition started deteriorating on Thursday and he was shifted to the intensive care unit after his oxygen saturation dropped.

He had returned to Hailakandi on March 18 after visiting Saudi Arabia. He reached Badarpur by train from New Delhi on March 18 and was under home isolation.

Hailakandi deputy commissioner Keerthi Jalli said, “Due to his advanced age, pneumonia developed quickly. SMCH doctors immediately shifted him to ICU and put him on a ventilator and tried very hard but were unfortunately unsuccessful. His remains were then brought back by our health team following the strictest norms of decontamination in a world-class, airtight three-layered body bag.”

Jalli also warned of taking strict action if anybody was found spreading rumours and said: “No rumour-mongering, panic-inducing, fear exciting activities should be taken up by anybody. We are constantly monitoring all social media and WhatsApp activities and we will not hesitate to take the strictest action necessary.”

Sarma said: “There is no stigma attached to the disease. In fact, at least five of the Covid-19 positive cases in the state have started recovering well. Of them, three are from Golaghat and two treated in the city have shown great signs of recovery. Their latest blood tests came negative. We expect them to get well soon and be released after maintaining all protocols.”

The minister said the lone Covid-19 positive patient from the city was also recovering. He said the state has adequate numbers of medical equipment and was expecting more supplies shortly.

Assam police have also stepped up to enforce the lockdown completely. On Friday, state police appealed the people to celebrate Rongali Bihu indoors.

Assam director-general of police Bhaskar Jyoti Mahanta said, “In view of the Covid-19 outbreak and to keep everyone safe, we request the Bihu committees across the state not to have an assembly of more than five people. They will be allowed only for hoisting the traditional Bihu flag as the ritual. And all such activities must be concluded within 30 minutes, besides maintaining social distancing norms.”

The ministry of home affairs has directed all states/Union Territories to ensure strict compliance of lockdown measures to fight the virus during the festivities.

In another development, an FIR was lodged by the executive magistrate of Hailakandi, Tridib Roy, at Sadar police station on Friday against some persons of ward number one under Hailakandi Municipal Board for blocking municipal workers from carrying out cleaning work at Ajachakpally fearing that they might be infected with the virus.

The FIR said some people jumped home quarantine and blocked the road. Despite pleas by the executive magistrate, they did not budge an inch, forcing Roy to file an FIR against them. The magistrate asked the police to take necessary action under Section 188 IPC and other sections under Assam Covid-19 regulations, 2020, an official press statement said.

Pijush Hazarika, minister of state (independent) health and family welfare rushed to the district and took stock of the situation as district administration sealed it for 14 days.

In Assam, so far 29 Covid-19 positives cases have been detected in 12 districts. While Golaghat district has the highest numbers of positive cases with nine, districts like Nalbari and Morigaon have four cases each. Goalpara has three positive cases, followed by Dhubri with two. Hailakandi, Kamrup (metro), Cachar, North Lakhimpur, Kamrup, South Salmara and Karimganj districts have a case each.