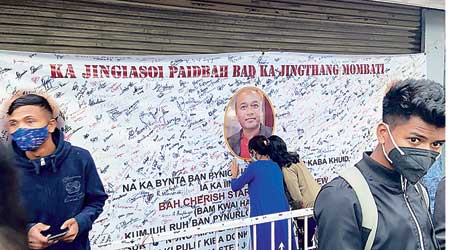 People take part in the signature campaign at Mawlai in Shillong on Friday seeking justice for the encounter death of Cheristerfield Thangkhiew
Telegraph picture
Umanand Jaiswal   |   Guwahati   |   Published 30.08.21, 12:10 AM

Eleven pressure groups seeking “justice” for the death of a former rebel leader in a “fake encounter” have stepped up pressure on the Meghalaya government to suspend three senior police officers allegedly responsible for the August 13 incident in Shillong’s Mawlai locality.

The groups, under the banner of Ka Sur Ki Nong Mawlai (The Voice of Mawlai People), carried out a day-long signature campaign followed by a 2km protest rally from Mawlai petrol pump on Friday in support of their demand to immediately suspend director-general of police R. Chandranathan, East Jaintia Hills superintendent of police Jagpal Singh Dhanoa and SP (traffic) Shailendra Bamaniya for their alleged role in the “encounter death” of former Hynniewtrep National Liberation Council (HNLC) general secretary Cheristerfield Thangkhiew in the early hours of August 13 at his residence.

The future course of action by the groups include formally seeking the support of 35 MLAs from the Khasi and Jaintia Hills area and holding a rally to “surrender” traditional Khasi knives before the administration to convey the message that police cannot kill somebody just for possessing a knife.

Though police have claimed that Thangkhiew was shot in self-defence after he tried to attack the police team with a knife, it found few takers after his family alleged that the former — and ailing — rebel leader was killed by the cops.

The family’s claim fanned anger and protests, leading to the government imposing curfew in Shillong to control the situation on the night of August 15, the day he was laid to rest. Thousands attended Thangkhiew’s funeral.

The duo said they will continue the campaign till the state government suspends the three police officers.

Kharlyngdoh also said they will be writing to the MLAs next week seeking their support, adding the legislators should resign if they want to remain silent.

“We want the three police officials suspended for a free and fair probe. That people came out in huge numbers to take part in the signature campaign despite rain in the morning reflected the mood of the people,” Nongseij said.

“We have collected nearly 10,000 signatures on the two banners, each measuring 14 feet by 10 feet, we put up in two localities of Mawlai. Family members of the deceased former rebel leader also took part in the signature campaign.  We will continue with our protest till our demand is met,” he said.

The first phase of the campaign on August 25 saw members of the Ka Sur U Nong Mawlai burn the effigies of chief minister Conrad Sangma, deputy chief minister Prestone Tynsong and the three police officers, among others.

The seven-day deadline set by the pressure groups for the government to suspend the cops had ended on August 25.

On August 18, the state government had entrusted the Meghalaya Human Rights Commission chairperson Justice T. Vaiphei to head the judicial probe into the encounter death of Thangkhiew. The report has to be submitted within three months.

Conrad has maintained that action will be taken against those found guilty. He said the judicial probe was ordered to get to the bottom of the encounter case and it would not be appropriate to initiate action before the report comes in.

The HNLC was formed in 1993 with the objective of securing an independent Khasi-Jaintia land.